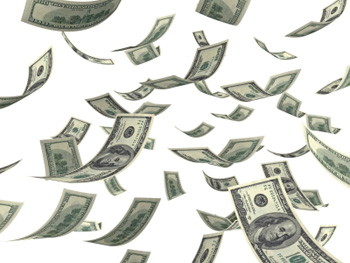 Last Friday, the Bureau of Labor Statistics’ monthly jobs and unemployment report contained horrible news.  The reported headlines stated that both total unemployment and also the unemployment rate were unchanged.  While that news was considered a disaster for an economy that is supposedly undergoing an economic recovery, that headline was also a lie.

According to the accompanying data released by the Bureau of Labor Statistics last Friday, there were 165,000 fewer employed civilian workers in August than in July.  That was on top of double counting 87,000 people in August as part of the so-called Birth/Death Adjustment.  To top that off, the BLS revised the prior two months of jobs reports to reduce the number of employed by 58,000 people.  In all, the ranks of the employed in August fell by more than 300,000 from July, despite the BLS claiming that employment had not changed.

The public reaction to just the misleading headlines, though, led to a drop in the US stock markets, while gold and silver prices rose.

Still, as bad as that news affected markets, the US dollar is being clobbered by more serious fresh developments.

For instance, also on last Friday, another round of US State Department documents was released by WikiLeaks.  Although there has not yet been time to analyze every document, there are three dated from late 2008 through early 2010 sent to Washington from the US Embassy in Beijing that discuss the US government’s suppression of gold prices and attempts to deter the Chinese government from acquiring gold reserves so that it would instead purchase US Treasury debt.

For more than a decade, the US government claimed that it has not acted to suppress gold prices even in the face of growing evidence that it has done so.  These documents were sent from the US Embassy to the State Department in Washington discussing gold price suppression by the US government and its European allies as an established fact.

While I suspect that there will be little coverage of the contents of these particular documents by the US media, you can be sure that governments around the world will zero in on these admissions which mean that the price of gold is too low and that US dollar is overvalued.  The result of these leaks will only add to gold demand in the coming weeks.

Tomorrow, the German legislature is scheduled to vote to ratify or reject the latest round of bailouts for the Greek government.  There is growing dissension by German citizens at repeatedly being asked to bailout other mismanaged European governments.  If the bailout is ratified, there is a good chance that there will be civil unrest in Germany to such a great degree that Angela Merkel, the head of the German government, may be removed from office.  Or, if the bailout is rejected, the fallout for banks across Europe could be catastrophic.  By that I mean that you could see some major European banks fail within days.  Any heightened risk to the already troubled major European banks will have a devastating impact on the US banking system.

The Swiss franc had been one of the world’s strongest currencies in the past year.  This announcement that it would be pegged to the teetering Euro scared a lot of investors seeking a safe haven away from the Swiss franc.  Almost immediately, the Swiss franc dropped more than 7% against the dollar and by more than 8% to the Euro.  In addition, the price of gold, as quoted in Swiss francs, jumped to an all-time high record.  With investors now likely to avoid the Swiss franc as a safe haven currency, that will almost certainly increase demand for physical gold.

Taken together, these recent events all point to the inherent weakness in owning paper currencies and the advantages of owning physical precious metals.  Central banks and sophisticated investors have already been buying more gold and silver.  These latest developments will only reinforce that trend toward higher precious metals prices.  You should add to your positions today rather than taking the risk of the price of gold soaring above $2,000 and silver closing above $50 in the near future.