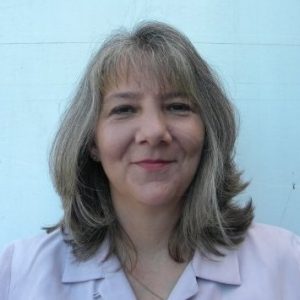 Online coin auctions are challenging for buyer, seller, and auctioneer, says Sheena Wallace, who helps run Auctions by Wallace, an onsite and online auction that typically showcases coins each week.

On her website, she notes that her company has “a proven track record when it comes to selling coins.” She emphasizes that her coin auctions are competitive because of the combined online and onsite crowds. She also has taken pains to provide hobbyists with expert photography.

I’ve consigned coins with Auctions by Wallace because the bidders tend to know numismatics. So rare lots tend to go at higher rates than if consigned to a seller who rarely handles coins and thus lacks knowledgeable buyers.

Problems also occur when consignors and hobbyists cannot locate favorite sellers who strive to satisfy customers. In the Internet age, anyone can state they are auctioneers and post an online catalog.

You find that phenomenon frequently on eBay, of course. But even some Proxibid sellers bid on their own coins and relist the same lots week after week, knowing they have to pay commissions only when lots sell. (Proxibid does require that such sellers state that they or their employees are bidding on their own lots.) But in my view, some Proxibid sellers abuse that company’s system.

Wallace is quick to note that she appreciates the online audience. “From my point of view I love the simulcast coin auctions because we are able to reach customers that we would not be able to reach without the Internet.  We have many valued customers that have been regular customers for years.  Each with their own preferences of coins to add to their collection.” 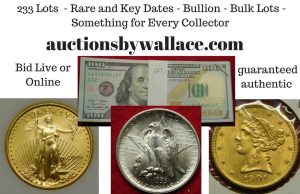 One of the methods to build online clientele is to process payments quickly and ship as soon as possible. Wallace likes the automatic results on Internet sessions. “We used to process payments immediately and ship out the next day,” she notes. “However, as the auctions grew, staying up to 5 a.m. working was no longer feasible.  Now, we wait a few days for special requests from returning bidders. It gives time for identity thieves to be found out and their payments declined.”

That’s one of the risks for consignor and bidder alike. I covered that challenge last year in “The Domino Effect of No-Pay Bidders,” noting the damage to all areas of the hobby when buyers do not pay or when people steal identities, using fake credit or debit cards.

Wallace relies on email to work with bidders who experience problems with any of her sessions. I can attest she does answer electronic mail quickly as well as queries directed to her when selling on HiBid.com.

“Some resolve everything quickly through email,” she says.  “But about once a week I get to actually talk with a bidder, and these are some of the best conversations that I get to have. We get feedback on what we can do to improve, or get feedback that lets us know to stay the course.”
Wallace, whose company is located in Barhamsville, Virginia, recalls talking recently with a bidder from the West Coast who collects mainly one particular type coin. This way, she learns more about the hobby. “I get to hear about what they have put together over the years.  Sometimes I talk with someone who is new to auction process for buying coins, and I enjoy talking with everyone about their auction experiences.  Most of them are positive. But every now and then you hear a story that makes you wonder how some folks get away with how they handle their sales.”

Wallace says she misses the “Boos and Booyahs” feature of my personal coin blog, Proxiblog.org, no longer active.

For several years, I kept tabs on auctioneers selling on Proxibid, noting bad practices, like this one earning a “Boo” for poor photography: 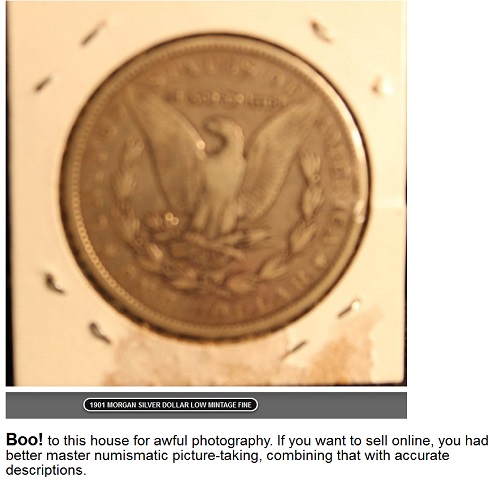 And this “Booyah!” to Decatur Coin and Jewelry for accurate photo and description: 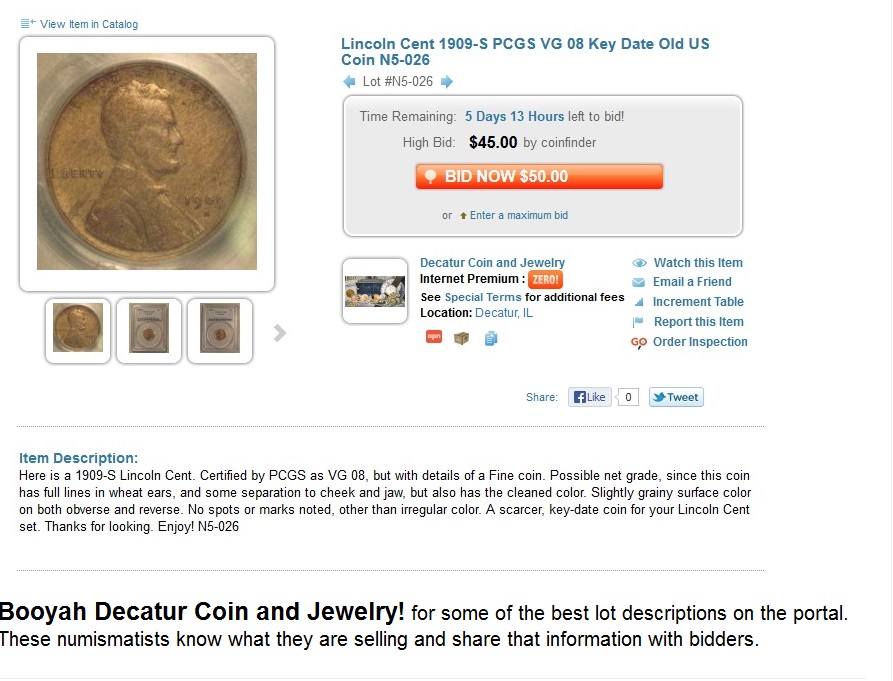 Sheena Wallace has heard what she calls “auction horror stories” concerning coins. One bidder won a gold coin from India from a rather large auction company.  “When he received the coin there was no gold at all in it.  He contacted the company and I believe they quickly worked something out.” But then in the next auction by the company, several more lots were listed as gold when they were plated base metal.


Her second story concerns a 5-ounce silver round.  When the bidder received the round, he noticed that it was silver-plated.  “He filed a dispute but since it was a large auction house the platform was backing up the auction house. He had to jump through crazy hoops to prove this was not what it was listed to be.  He had to take it to multiple sources and get letters documenting that the 5-ounce silver round was silver-plated.”

Whenever you have a bad experience buying online, you should immediately contact the auction company to see if the seller can rectify the problem. Chances are you will confront the auctioneer’s mantra of “all sales final!” Sometimes the auctioneer will make exceptions to that, especially if you are a regular customer. If the coin is counterfeit, the sale is not final, as selling fake coins—intentionally or not—violates the Hobby Protection Act.

Wallace advises those with any problems in her auction to notify her as soon as possible. “When you wait three months or send me blurry photos of a coin that doesn’t seem to match the coin we sent, there is nothing that we will do.”

How about you? What good and bad experiences have you had buying or selling coins online? Tell us in the comments below!   ❑
Share: