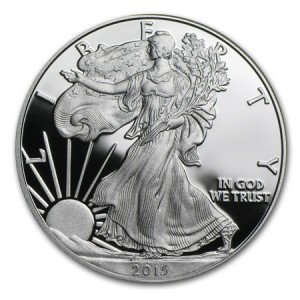 The 2014 American Eagle One Ounce Silver Proof Coin is now sold out. The popular issue had been on and off of Unavailable status at the U.S. Mint in recent weeks.

The 2014 ASE Proof has had a good run since its release in January of last year. A week or two of adjustments may continue to revise its overall total, but as of last week the coin had sold 894,836 pieces, according to the most recent sales report. That makes it the highest-selling collector product on offer from the Mint at the time it was discontinued.

As previously reported, the item had been on and off of “Unavailable” status at the U.S. Mint in recent weeks. “Unavailable” usually means that production for an item is winding down and that the Mint is fielding its final orders and returns in preparation to declare the item “Sold Out.” Some products are listed as Unavailable for months, with occasional small batches of inventory released sporadically to buyers who seize upon these small windows of opportunity.

Back in September, Tom Jurkowsky, director of the US Mint’s Office of Communications, elucidated this process with regard to the 2014 Silver Eagle Proof coin. As noted on Mint News Blog, he explained, “There were approximately 150,000 2014 American Eagle Silver Proof Coins that were carried over into 2015. Those 150,000 coins have now been ordered. We now need to make sure all orders have been processed, shipped to customers and there are no returns. This is a 21-day process. Once that 21-day period has passed, the product will move to a ‘sold out’ status.”

The 2015 issue of the American Eagle Silver Proof Coin has spent a lot of time on back-order recently, but at the time of this writing the item is in stock at the U.S. Mint’s Web Site.