The Royal Canadian Mint are marking an upcoming Royal Visit with an unusual design which blends the Queen’s position as Canadian head of State and her well-known affection for horses. 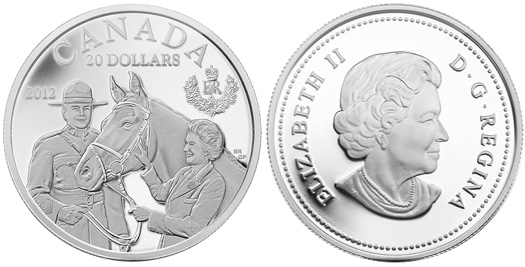 Designed by Royal Canadian Mint engraver Bonnie Ross, the reverse of the coin depicts the 1968 presentation to the Queen by the Royal Canadian Mounted Police of Burmese, a beautiful black stallion who featured at every successive Trooping of the Colour ceremony until the last time the Queen received the colour on horseback in 1986. The coin also marks the upcoming Royal Visit of the Prince of Wales to commence in May on behalf of his Mother as part of the Royal Family’s celebrations of the Queen’s Diamond Jubilee which began on the 6th February of this year. Also featured on the reverse is the Queen’s official commemorative cypher of “EIIR” and the numeral “60” below the initials which is positioned to the upper right of the primary design along with the coin’s denomination of 20 Dollars.

The circulation portrait of the Queen designed by Susanna Blunt appears on the obverse.

The coin is struck in pure silver with a weight of 31.3 grams and a diameter of 38 mm. Struck to proof quality, the coin has a mintage of 25,000 pieces and is accompanied with numbered certificate and presentation case.

For more information on this and other coins issued by the Royal Canadian Mint, please visit their website at: http://www.mint.ca/store/coin/queen%19s-visit-to-canada-fine-silver-20-coin-2012-prod1270020