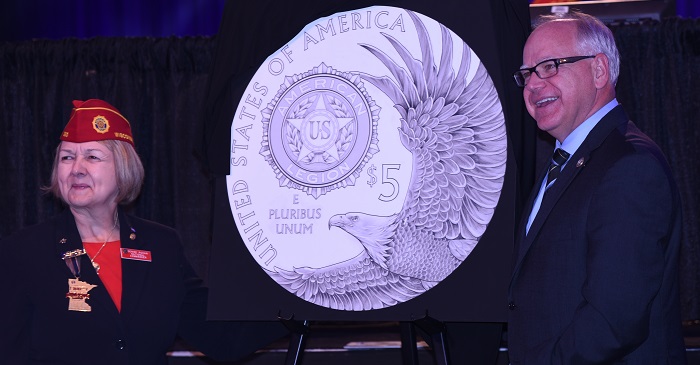 The artists in the Mint’s Artistic Infusion Program created the designs that will appear on gold, silver, and clad coins as mandated by Public Law 115-65, the legislation authorizing this coin program. The Mint’s sculptor-engravers executed the designs. 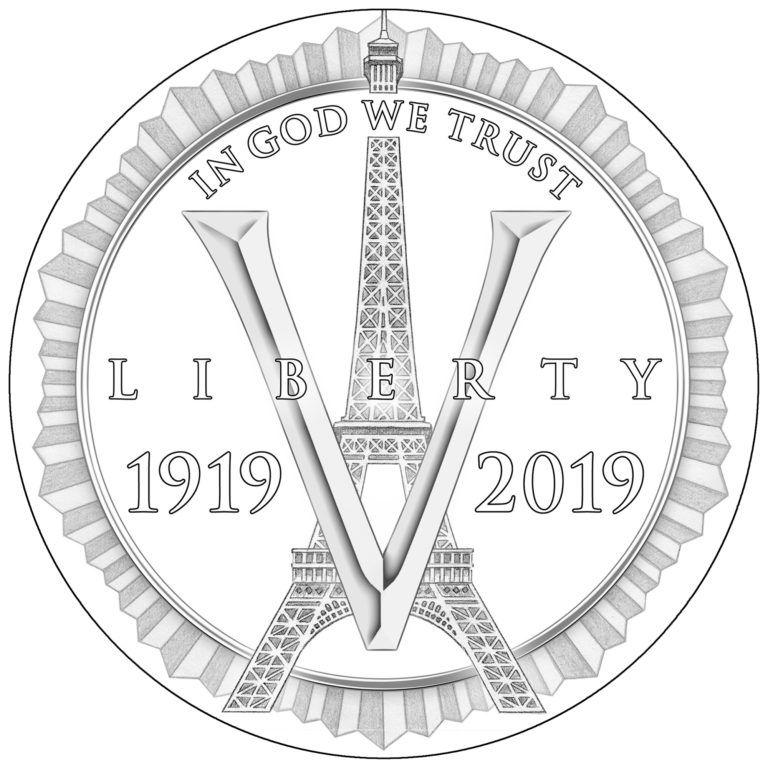 Designer: Chris Costello
Sculptor-Engraver: Phebe Hemphill
This design commemorates the inception of the American Legion and its mission to serve America and its war veterans. The outer geometric rim design from the American Legion emblem, the Eiffel Tower, and V for victory represents the formation of the organization in Paris in 1919 at the end of World War I. Inscriptions are IN GOD WE TRUST, LIBERTY, 1919, and 2019. 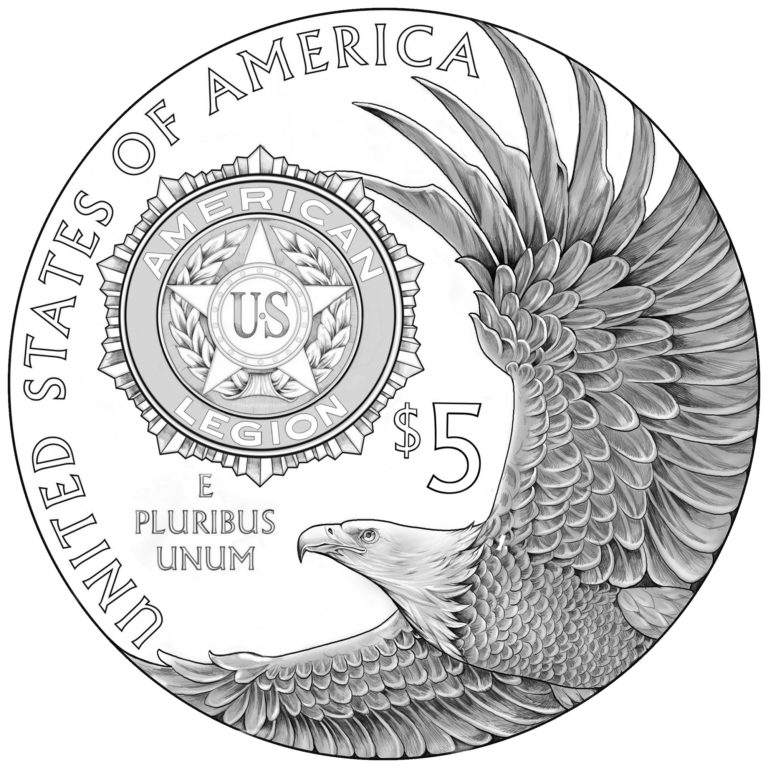 Designer: Paul C. Balan
Sculptor-Engraver: Joseph Menna
This design depicts a soaring eagle, a symbol of the United States during times of war and peace alike. The American Legion emblem is depicted above the eagle. Inscriptions are UNITED STATES OF AMERICA, $5, and E PLURIBUS UNUM. 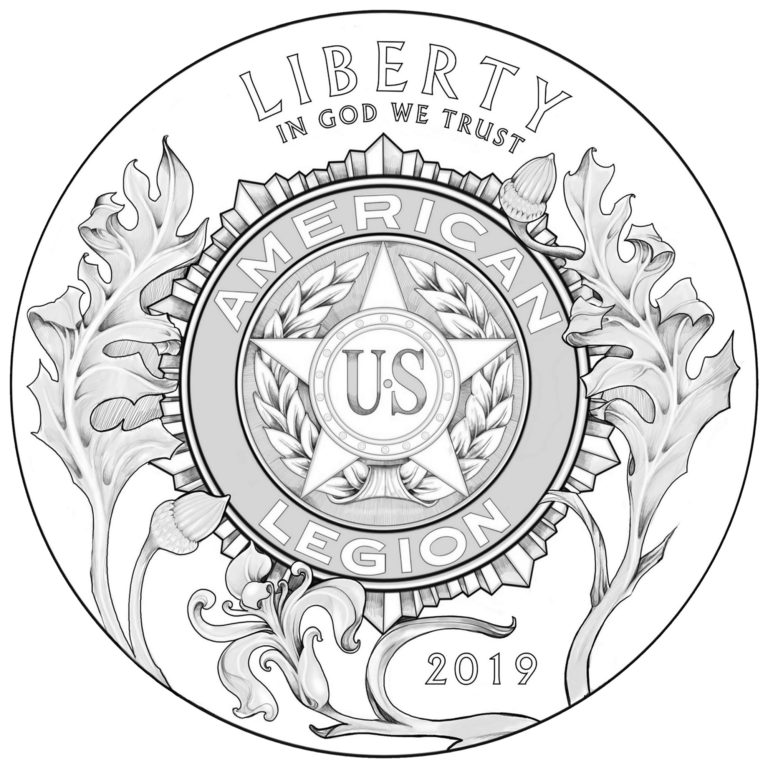 Designer: Paul C. Balan
Sculptor-Engraver: Renata Gordon
This design depicts the American Legion emblem adorned by oak leaves and a lily, commemorating the founding of the American Legion in Paris, France. Inscriptions are LIBERTY, IN GOD WE TRUST, and 2019. 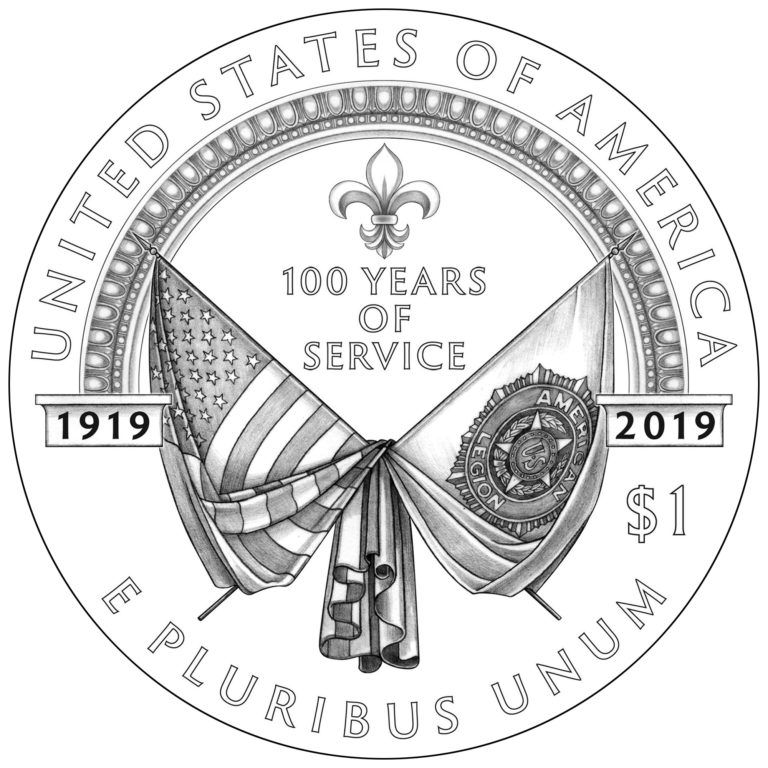 Designer: Patricia Lucas-Morris
Sculptor-Engraver: Michael Gaudioso
The design represents the founding of the American Legion in Paris in 1919. Above the crossed American and American Legion flags is a fleur-de-lis and the inscription 100 Years of Service. Additional inscriptions are UNITED STATES OF AMERICA, 1919, 2019, $1, and E PLURIBUS UNUM. 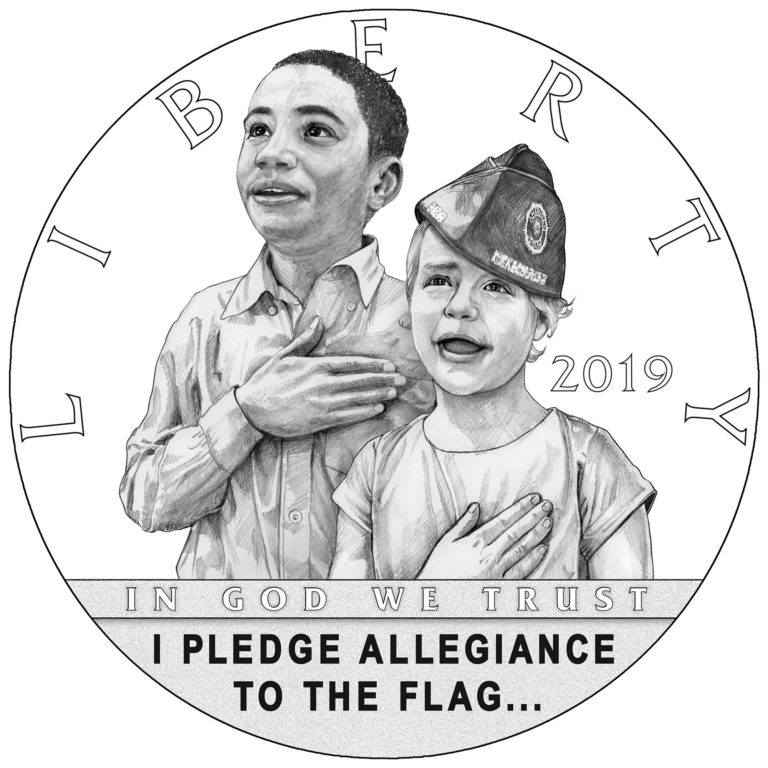 Designer: Richard Masters
Sculptor-Engraver: Phebe Hemphill
This design depicts two children standing and reciting the Pledge of Allegiance, the little girl proudly wearing her grandfather’s old American Legion hat. Inscriptions are LIBERTY, 2019, IN GOD WE TRUST, and I PLEDGE ALLEGIANCE TO THE FLAG… 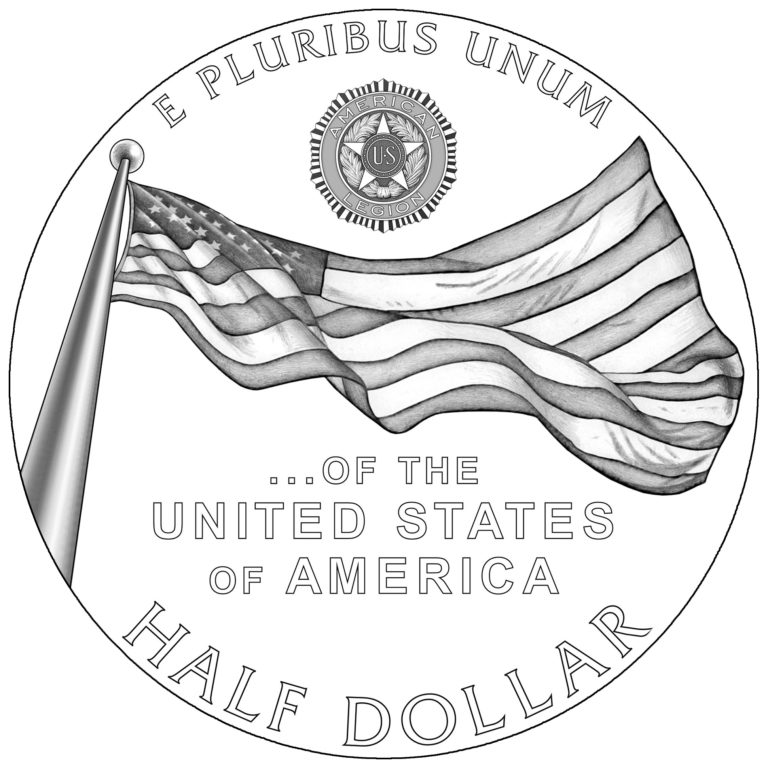 Designer: Richard Masters
Sculptor-Engraver: Joseph Menna
The design completes the phrase from the obverse “I pledge allegiance to the flag… of the United States of America.” It depicts an American Flag waving atop a high flagpole as seen from the children’s point-of-view from the ground below. The American Legion’s emblem is featured just above the flag. Additional inscriptions are E PLURIBUS UNUM and HALF DOLLAR.


The authorizing legislation for the American Legion 100th Anniversary Commemorative Coins also calls for the Mint to collect surcharges from coin sales—$35 for each $5 gold coin, $10 for each silver dollar coin, and $5 for each half dollar clad coin. The surcharges are authorized to be paid to the American Legion to support the Legion’s programs for veterans, members of the Armed Forces, and other purposes specified by the authorizing legislation.

The Mint will announce the release date and additional pricing information for this coin program prior to its release in early 2019.