The United States Mint has released the 2012 Silver Proof Set. This 14 coin annual set includes 7 coins struck in a composition of 90% silver.

To produce proof coinage, the US Mint uses specially treated proof blanks fed, which are struck multiple times with specially polished dies. The resulting coins are extraordinarily brilliant with sharp relief and a mirror like background. The design elements and inscriptions appear frosted to produce a cameo effect. 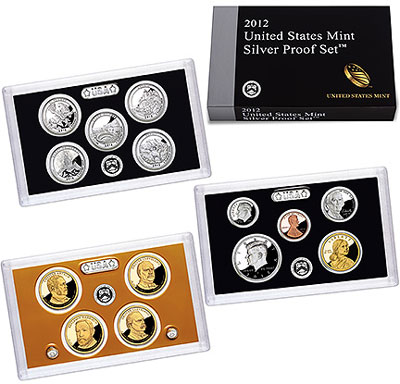 Each 2012 Silver Proof Set includes the following 14 coins struck at the San Francisco Mint and carrying the “S” mint mark:

The dimes, five quarter dollars, and half dollar are struck in “coin silver” with a composition of 90% silver and 10% copper. Collectively, these coins contain 1.33823 troy ounces of pure silver.

The 14 coins of the 2012 Silver Proof Set are packaged into protective plastic lenses and placed in a box with a certificate of authenticity. Each set is priced at $67.95. There are no maximum product limits or household ordering limits imposed.