The United States Mint has released the 2014 Silver Proof Set. This annual product contains 14 coins bearing the “S” mint mark of the San Francisco Mint with seven of the coins struck in a composition of 90% silver. 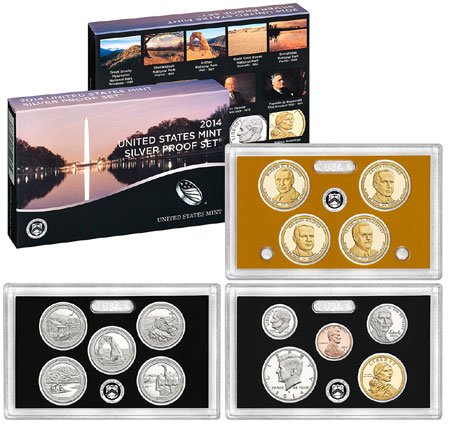 United States Mint proof coins are struck through a process through which specially treated, polished, and cleaned blanks are fed into presses fitted with specially polished dies and struck at least twice to ensure sharp relief. The resulting coins featured frosted sculpted design elements against a mirrored background for a special cameo appearance.

The five quarters, dime, and half dollar are each struck in a composition of 90% silver, or “coin silver”, with the specifications matching those used to strike pre-1965 circulating coinage. The $1 coins, cent, and nickel are struck in the current standard compositions.

All 14 coins included in the set are placed into three protective plastic lenses and packaged within an illustrated outer box with a certificate of authenticity.

The 2014 Silver Proof Set is priced at $53.95, with no maximum mintage or household ordering limits imposed.

Later this year, the US Mint has scheduled to release the 2014 Limited Edition Silver Proof Set. This product is expected to contain the seven 90% silver proof coins along with the 2014-W Proof American Silver Eagle.