Proof coinage is manufactured by the US Mint through a process which involves striking specially treated blanks multiple times with polished dies. This results in extraordinarily brilliant coins with sharp relief. Modern proof coins feature frosted design elements against mirror like fields, which creates a cameo effect. 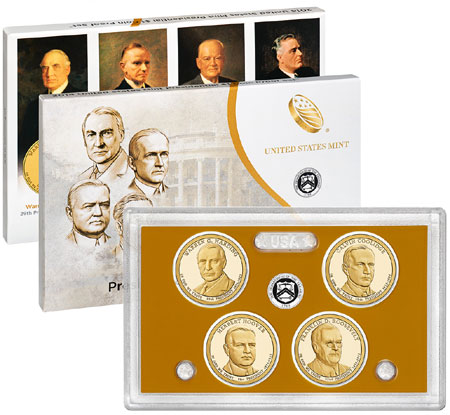 The four coins included in the 2014 Presidential $1 Coin Proof Set are struck at the San Francisco Mint and carry the “S” mint mark. The coins are packaged in a plastic lens which allows the obverse, reverse, and edges of the coin to be viewed. The lens is placed in an illustrated outer box along with a certificate of authenticity.

Each set is priced at $18.95. There are no product limits or household ordering limits imposed.

The current product represents the first availability of the 2014 Presidential Dollars in proof format. The coins will later be included in other annual sets such as the 2014 Proof Set and 2014 Silver Proof Set.

The Presidential $1 Coin Program was launched in 2007 to honor the former Presidents of the United States in the order served. With four different coins issued each year, the series is currently scheduled to run until at least 2016.