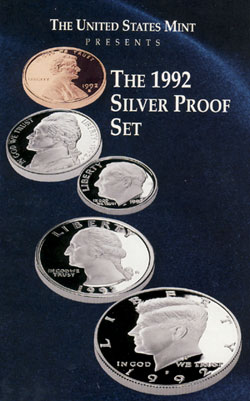 Since 1992, the Silver Proof Set has been one of the United States Mint’s core annual offerings. Each set contains proof coins for the full range of denominations, with the half dollar, quarter(s), and dime struck in a special composition of 90% silver and 10% copper. During the initial years of the offering, the Mint also made available an upscale version of the product known as the Premier Silver Proof Set, which carried a higher price and was ordered in lower numbers compared to the standard set.

Following the Coinage Act of 1965, the traditional 90% silver composition of the half dollar, quarter, and dime were changed. The silver was completely removed from the quarter and dime, and initially reduced to 40% for the half dollar, before it was also removed completely after 1970. The composition of the coins within the annual proof set mirrored the changes in composition. With the exception of the 40% silver half dollars issued until 1970 and special bicentennial sets issued in 1976, the annual proof set no long contained silver coins.

This changed following the enactment of Public Law 101-585 on November 15, 1990. This law provided the Mint with authorization to produce sets of proof coins with certain denominations struck in a composition of 90% silver and 10% copper. The new product type would officially launch in 1992. Promotional materials from the Mint indicated that the silver proof set would be issued again “for the first time since 1964”.

The newly offered Silver Proof Sets were available in two different formats, which contained the same coins but within different packaging. The standard option placed the coins within a single plastic lens and outer cardboard box, similar to the clad composition set, but with the lens insert and box colored black instead of purple. The premier option placed the plastic lens within a black velvet and white satin presentation case with “gleaming silvery” accents. The case was placed within a sturdy outer cardboard box and accompanied by a certificate of authenticity printed on parchment paper. 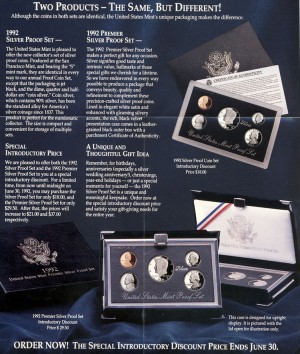 The Premier Silver Proof Set was targeted towards gift giving and a higher end market. Promotional materials stated: “Silver signifies good taste and intrinsic value, hallmarks of those special gifts we cherish for a lifetime. So we have endeavored in every way possible to produce a package that conveys beauty, quality, and refinement to complement these precision-crafted silver proof coins.”

One of the special features of the Premier packaging, which was noted on an instruction sheet, was the ability for the presentation case to be arranged to display the coins in an upright position. 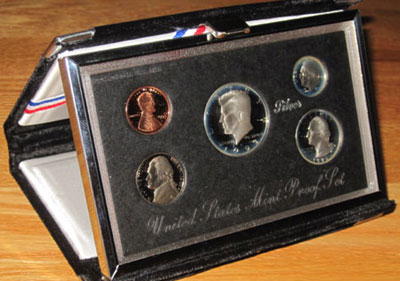 As might be expected, sales of the Premier Silver Proof Set were lower compared to the standard set. However, the more expensive set still managed to sell more than 100,000 units for each year of offering. Sales were the strongest for the first year of release in 1992, when the Premier sets sold 308,055 units, compared to sales of 1,009,586 for the standard sets. Final mintage figures for each year of offering are shown below.

The last Premier Silver Proof Set was offered in 1998. After this time, the product was discontinued ahead of the launch of the 50 State Quarters Program and the resulting expansion in the number of coins included in the United States Mint’s annual sets. Despite the lofty premiums initially charged for the elegant style of packaging, today the Premier Silver Proof Sets are valued at virtually the same levels as the standard silver sets.