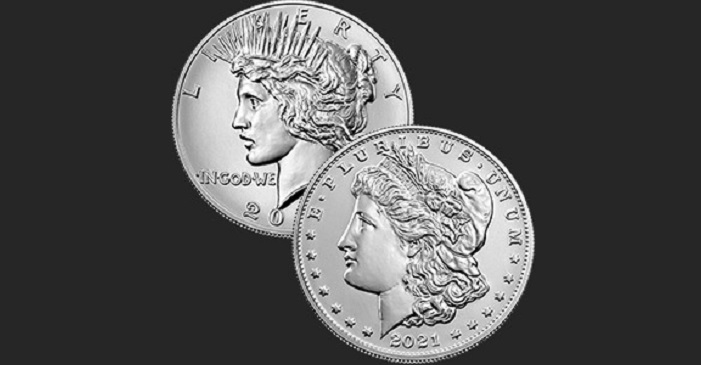 On sale for two weeks each or until mintage is depleted, with shipping in October

Washington — The United States Mint (Mint) today announced that the 2021 renditions of the classic Morgan and Peace dollars will be available in three pre-order windows, beginning on May 24, June 1, and June 7, with each order window lasting two weeks.

The products will include five Morgan dollars — three versions from Philadelphia (one with no mint mark, one with a Carson City privy mark, and one with a New Orleans privy mark) and one version each from Denver and from San Francisco with “D” and “S” Mint marks, respectively. The Peace dollar will be manufactured at Philadelphia with no mint mark. The historic New Orleans and Carson City mints are no longer operational United States Mint facilities, and no Morgan dollars will actually be struck in those cities. The privy mark coins from Philadelphia are meant to honor the history of the original mintage.

The Morgan dollars struck at Denver (21XG) and San Francisco (21XF) will be on sale during the second pre-order window beginning at noon (ET) June 1 and extending until June 15 at 3:00 pm (ET) or until product inventory is depleted.

The Morgan dollar (21XE) and the Peace dollar (21XH) struck at Philadelphia will be on sale during the third pre-order window beginning at noon (ET) June 7 and extending until June 21 at 3:00 pm (ET) or until the product inventory is depleted. The three pre-order windows were necessary to coordinate production planning at our facilities.

Shipping is scheduled to begin in October. Customers may begin ordering the coins at noon (ET) on the day each pre-order window opens — May 24, June 1, and June 7 here.

In addition, the Morgan and Peace dollars will be included in the Mint’s recently launched Authorized Bulk Purchase Program. This new program is structured to better meet marketplace product availability on the initial on-sale date by expanding the distribution of Mint products. No more than 10% of products with limited quantities will be distributed under this program.

The coins feature two of the most revered designs of Liberty in U.S. coinage history. The Morgan dollar, designed by George T. Morgan, features an obverse profile of Lady Liberty, and the reverse features a heraldic eagle. The Peace dollar, designed by Anthony de Francisci, features the Goddess of Liberty on the obverse and a bald eagle clutching an olive branch on the reverse.

The Morgan dollar represents the country’s westward expansion and industrial development in the late 19th century. The Peace dollar symbolizes the country’s coming of age as an international power while recognizing the sacrifices made by her citizens in World War I and celebrating the victory and peace that ensued.

To reduce the risk of employee exposure to COVID-19 in the workplace, the Mint’s sales centers are closed until further notice. Please use the Mint’s catalog site as your primary source of the most current information on product and service status.