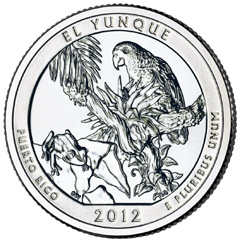 Through publication in the Federal Register and a recent press release, the United States Mint has announced pricing for many of their 2012 numismatic product offerings. Prices have been announced for America the Beautiful Quarters products, Presidential Dollars products, numismatic versions of the American Silver Eagle, and the core annual set offerings.

Prices levels for some products have been reduced considerably compared to the previous year. The largest decreases will occur for the America the Beautiful Quarters Uncirculated and Circulating Coin Sets, which will each decline by more than 40%. The ATB Quarter Three Coin Sets, 100-Coin Bags, and Presidential $1 Coin & First Spouse Medal Sets will have their prices deceased by more than 30%.

According to the Mint’s press release, “The bureau was able to set these lower prices and maintain others by refining the product costing process, taking advantage of current lower prices for precious metals and negotiating better pricing from its suppliers.”

The list of prices reveals some new products for 2012, including 250-coin boxes, 500-coin boxes, 100-coin bags, and a five-coin set for $1 coins. These new options should help to satisfy demand for larger quantities of Presidential Dollars, since new releases will no longer be distributed to circulation channels by the Federal Reserve Banks.

Within the United States Mint’s 2011 Annual Report, plans were revealed to offer a 2012-S Uncirculated Silver Eagle. A collectible uncirculated version of the Silver Eagle with the “S” mint mark was released in 2011, but only as part of the 25th Anniversary Set.