The United States Mint released the Millennium Coinage and Currency Set in the summer of 2000. At first, the sets did not make much of an impression with collectors. However, when the sets started to arrive and were closely examined, collectors realized that a special finish had been used for the included Sacagawea Dollar, resulting in a prompt sell out and secondary market price appreciation. 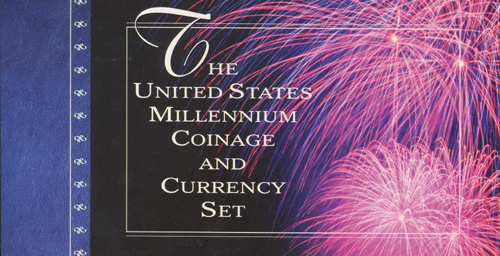 Each set included the 2000-D Sacagawea Dollar, 2000 American Silver Eagle bullion coin, and a $1 Federal Reserve Note. Also included was a booklet with the brief stories about each item and other historical information. The final page of the booklet recounted Benjamin Franklin’s desire to select the wild turkey as America’s national bird, rather than the bald eagle. The sets were limited to production of 75,000 and priced at $39.00 each. 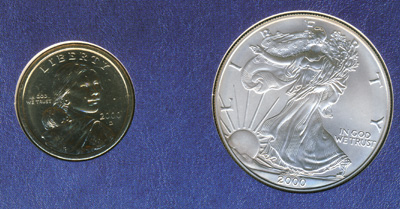 The coins and note included in the Millennium Coinage and Currency Set each had a special aspect, some of which were not mentioned by the United States Mint. The $1 Federal Reserve Note had a serial number beginning with the digits “2000” to recognize the new millennium. The 2000 Silver Eagle was specifically identified as produced at the West Point Mint, although it did not contain a mint mark. For this year, production had taken place at both the Philadelphia and West Point Mints and until now the identification of certain coins to a specific mint had not been possible. Finally, the 2000-D Sacagawea Dollar had a burnished finish, similar to the special finish used for the 5,000 coins that had been paid to Glenna Goodacre as her design fee.

The special finish for the Sacagawea Dollar, which was not initially mentioned by the Mint, spurred a frenzy with collectors. The “Goodacre Presentation” Sacagawea Dollars had previously made headlines for their special treatment and would eventually be encapsulated and sold at a strong premium. Collectors sensed a similar opportunity for the Millennium Set, driving a rapid sell out of the 75,000 product limit.

Some of the Millennium Coinage and Currency Sets were eventually sent third party grading companies, which provided special pedigrees. Typically, to receive the pedigrees, the coins had to be submitted within the original US Mint packaging. 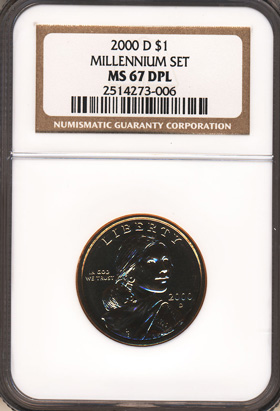 PCGS and NGC included the pedigree “Millennium Set” on their holders for both the 2000 Silver Eagle and the 2000-D Sacagawea Dollar. Due to the burnished finish, many of the coins in NGC holders were awarded the “PL” designation for “Proof Like”, with a much smaller proportion of coins receiving the “DPL” designation for “Deep Proof Like”.

Independent Coin Grading (ICG) pedigreed the coins “Official US Mint Millennium Coinage Set”. The Sacagawea Dollars were identified as “Issued Burnished” and not given a numerical grade due to the fact that the burnishing was a post strike treatment. A very small number of coins were also identified as “Not Burnished” which generated interest from some collectors.

For the 2000 Silver Eagles included in the Millennium Set, ICG included the “W” mint mark within parentheses on the holder. Even though the coins did not actually contain a mint mark, they could be sourced to the West Point Mint due to their inclusion in the set and were identified as such.

More than a decade later, both PCGS and NGC have started to assign the “S” or “W” mint mark within parentheses for bullion  Silver Eagles when mint of origin can substantiated by submitting coins in unopened 500 coin Green Monster Boxes.