In 2009, a number of specially designed coins were released to mark the bicentennial of the birth of Abraham Lincoln. This included a commemorative silver dollar limited to a mintage of 500,000 and four different designs for the Lincoln Cent to represent the four stages of the life of the 16th President. The 2009 United States Mint Lincoln Coin & Chronicles Set brought together the five different issues within a single numismatic product that proved to be extremely popular with collectors.

Each of these designs was released for general circulation in the standard composition of 97.5% zinc and 2.5% copper. As provided by the authorizing legislation, collector versions of the coin were produced in the original composition of 95% copper. These would be included in the annual proof and uncirculated coin sets, a separate 2009 Lincoln Cent Proof Set, and the Lincoln Coin & Chronicles Set. 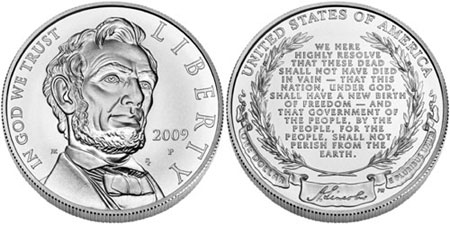 Under separate legislation Public Law 109-285, a commemorative silver dollar was authorized to honor Abraham Lincoln. The obverse design would feature a portrait designed by Justin Kunz based on a sculpture created by Daniel Chester. The reverse would feature the final 43 words of the Gettysburg Address surrounded by a laurel wreath with a reproduction of Lincoln’s signature at the base. The reverse was designed by Phebe Hemphill.

The commemorative silver dollars were offered in proof and uncirculated format, with a maximum mintage of 500,000 pieces across all options. Individual sales began on February 12, 2009 and a sell out occurred after approximately one month. Total sales included 325,000 proofs and 175,000 uncirculated coins. The US Mint held back a final 50,000 proof coins for inclusion in a forthcoming product.

Shortly following the sell out of the individual commemorative coins, the special product was revealed to be a “Coin & Chronicles Set” to be released later in the year.

Sales for the 2009 Lincoln Coin & Chronicles Set would officially begin on October 15, 2009. Each set would include all four of the 2009 Lincoln Cents in proof format, struck in the special composition of 95% copper, and the 2009 Lincoln Silver Dollar also in proof format. Supplemental materials included a reproduction of a photograph of Abraham Lincoln, a reproduction of the Gettysburg Address in Lincoln’s handwriting, and a certificate of authenticity. These items were placed in a leather-like tri-fold case with accompanying slip cover.

The price original price for each set was $55.95 with an ordering limit of only one set per household imposed by the US Mint.

By the time of release for this special set, the individual proof silver dollars had been sold out for several months and were fetching around $60 to $70 each in secondary market sales. This served to bolster the already considerable collector anticipation for this numismatic product.

When sales for the set officially opened, the US Mint’s website slowed to a crawl, making it difficult for many collectors to place their orders. Within the first five hours of availability, sales had reached nearly 30,000 units. This was an impressive start considering the ordering limit of just one per household.

By October 16, 2009 at 6:00 PM ET, the United States Mint posted a waiting list notice on their website. This indicated that orders had been received to reach the 50,000 product limit. For a brief period, orders were accepted for placement on a waiting list which would be fulfilled in the event any cancellations. All told, the product managed to sell out within 30 hours of availability.

Almost immediately after the sell out, the Lincoln Coin & Chronicles Set began selling on the secondary market for nearly triple the original issue price. Although the premiums have subsided in recent years, the sets still command a strong premium over the original price.