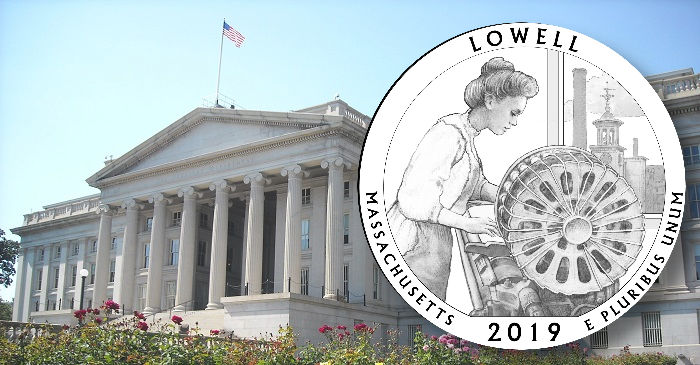 Philadelphia — The United States Mint revealed the official designs for the 2019–dated coins in the America the Beautiful Quarters Program. The designs were unveiled at the American Numismatic Association’s World’s Fair of Money in the Philadelphia Convention Center. 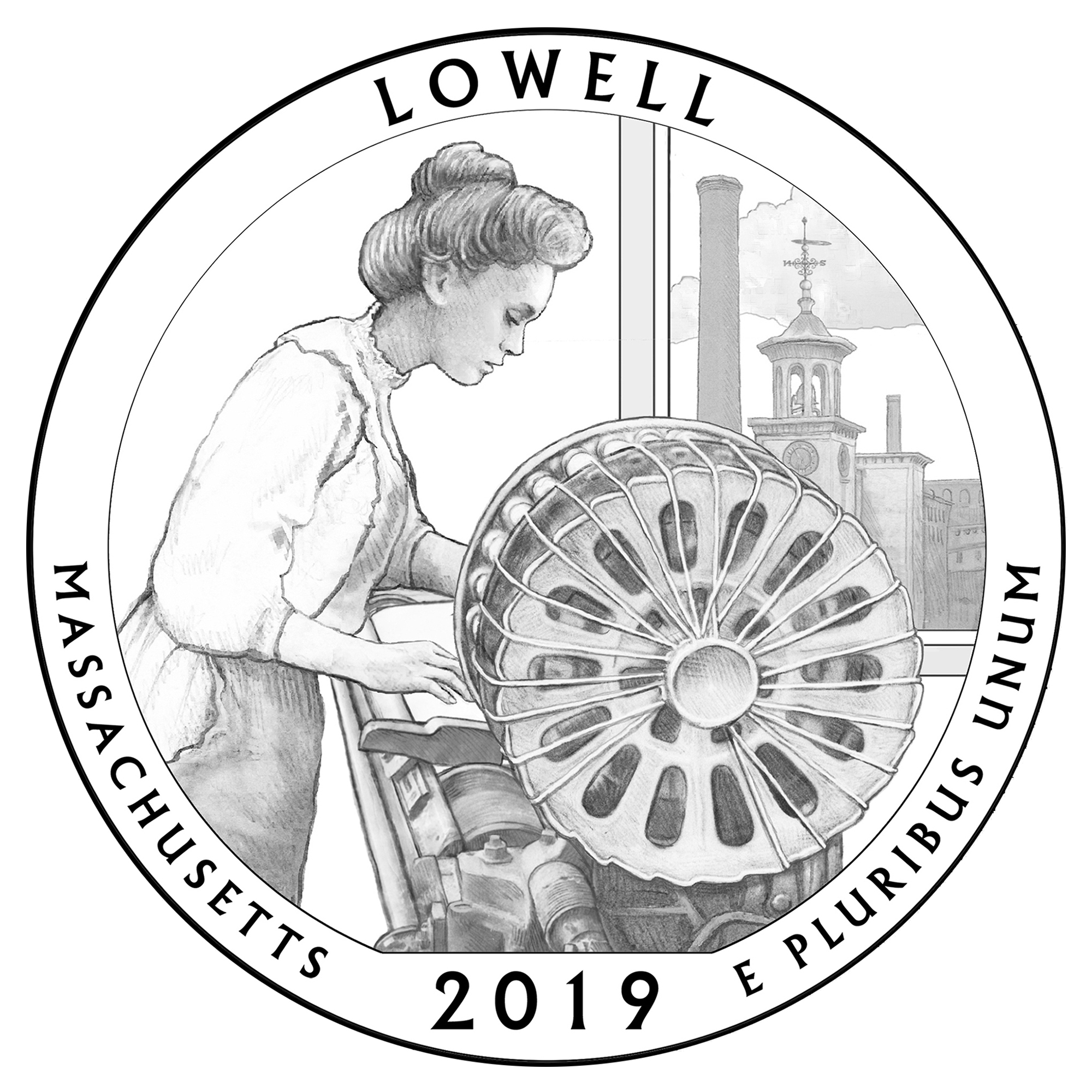 This design depicts a mill girl working at a power loom with its prominent circular bobbin battery. A view of Lowell, including the Boott Mill clock tower, is seen through the window. Inscriptions are LOWELL, MASSACHUSETTS, 2019, and E PLURIBUS UNUM. 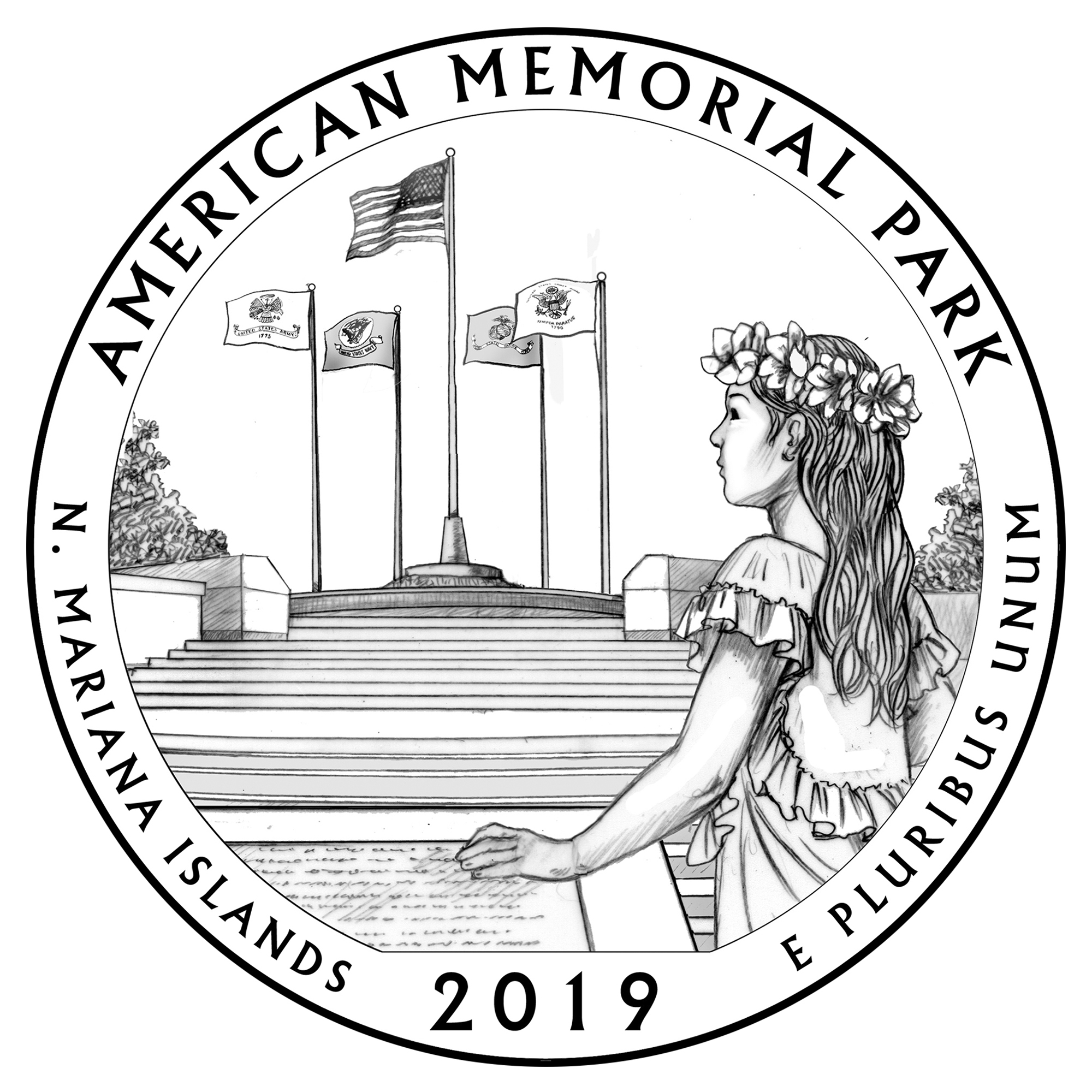 This design depicts a young Chamorro woman in traditional dress at the front of the Flag Circle and Court of Honor. She is resting her hand on the plaque whose text honors the sacrifice of those who died in the liberation of Saipan. Inscriptions are AMERICAN MEMORIAL PARK, N. MARIANA ISLANDS, 2019, and E PLURIBUS UNUM. 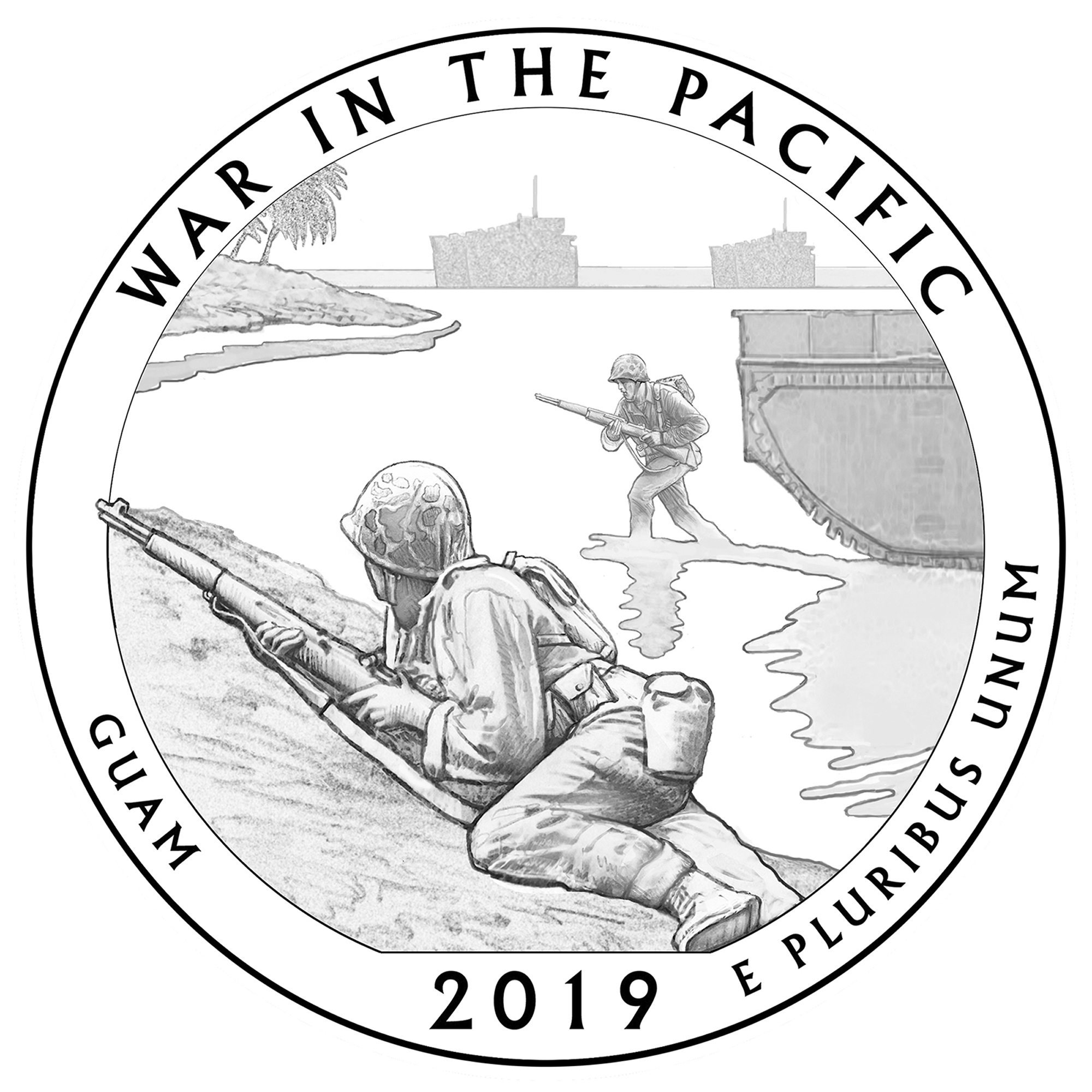 This design portrays American forces coming ashore at Asan Bay, strengthening the number of troops on the island in the fight for Guam and its eventual liberation. Inscriptions are WAR IN THE PACIFIC, GUAM, 2019, and E PLURIBUS UNUM. 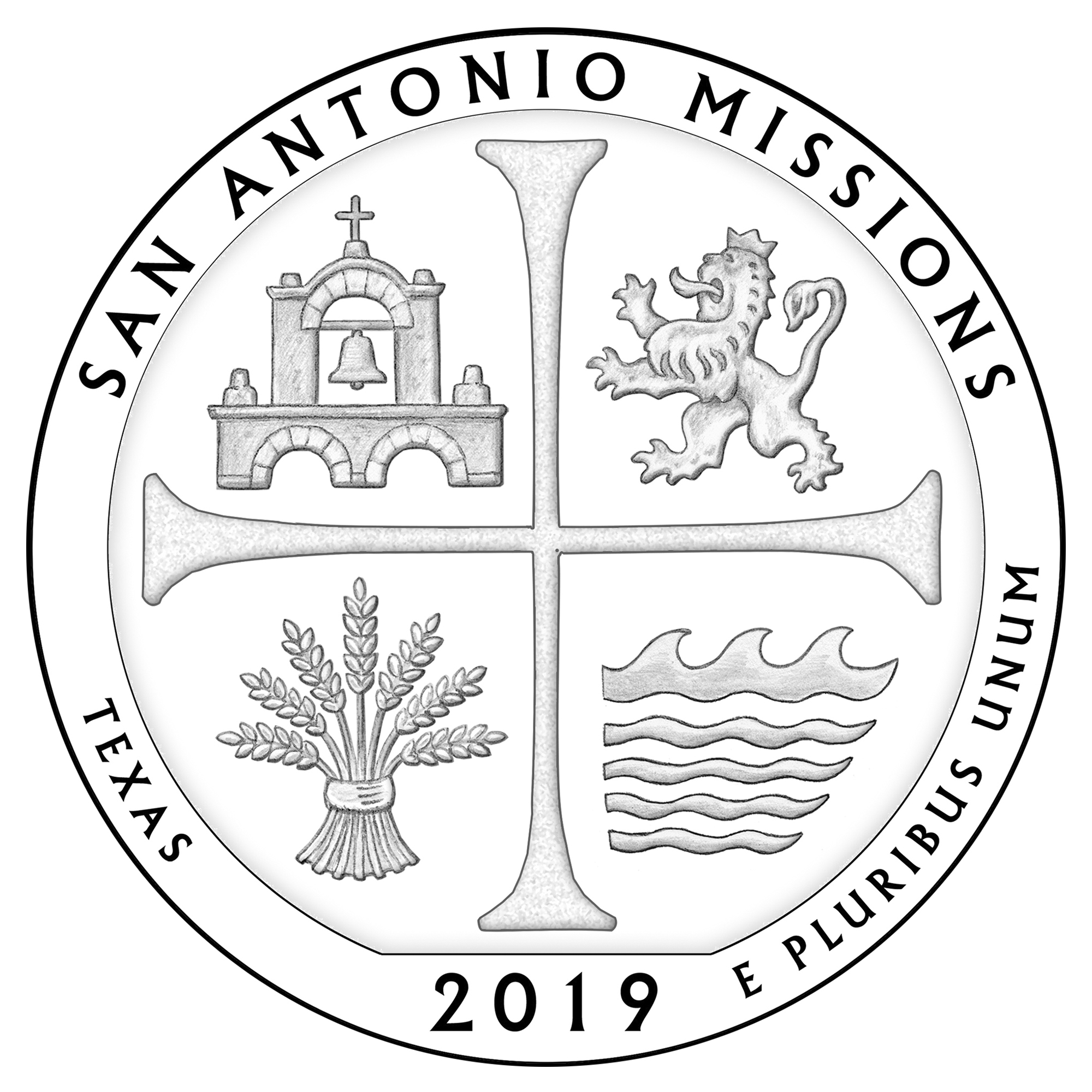 This design depicts elements of the Spanish Colonial Real coin to pay tribute to the missions. Within the quadrants are symbols of the missions: wheat symbolizes farming, the arches and bell symbolize community, a lion represents Spanish cultural heritage, and a symbol of the San Antonio River represents irrigation methods and life-sustaining resources. Inscriptions are SAN ANTONIO MISSIONS, TEXAS, 2019, and E PLURIBUS UNUM. 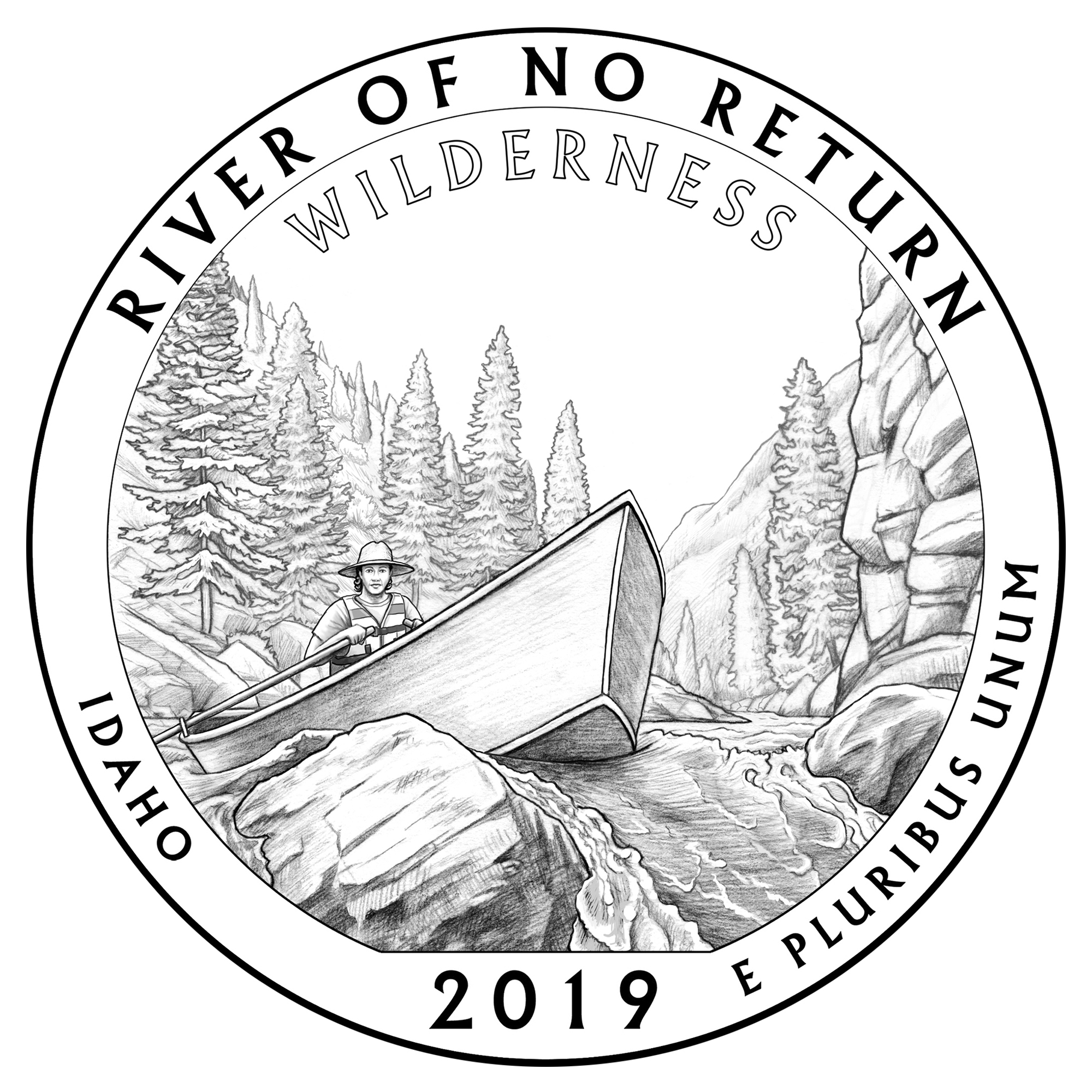 This design depicts a piloted drift boat on the rushing river encompassed by the trees and rock formations of the Wilderness. Inscriptions are RIVER OF NO RETURN, WILDERNESS, IDAHO, 2019, and E PLURIBUS UNUM. 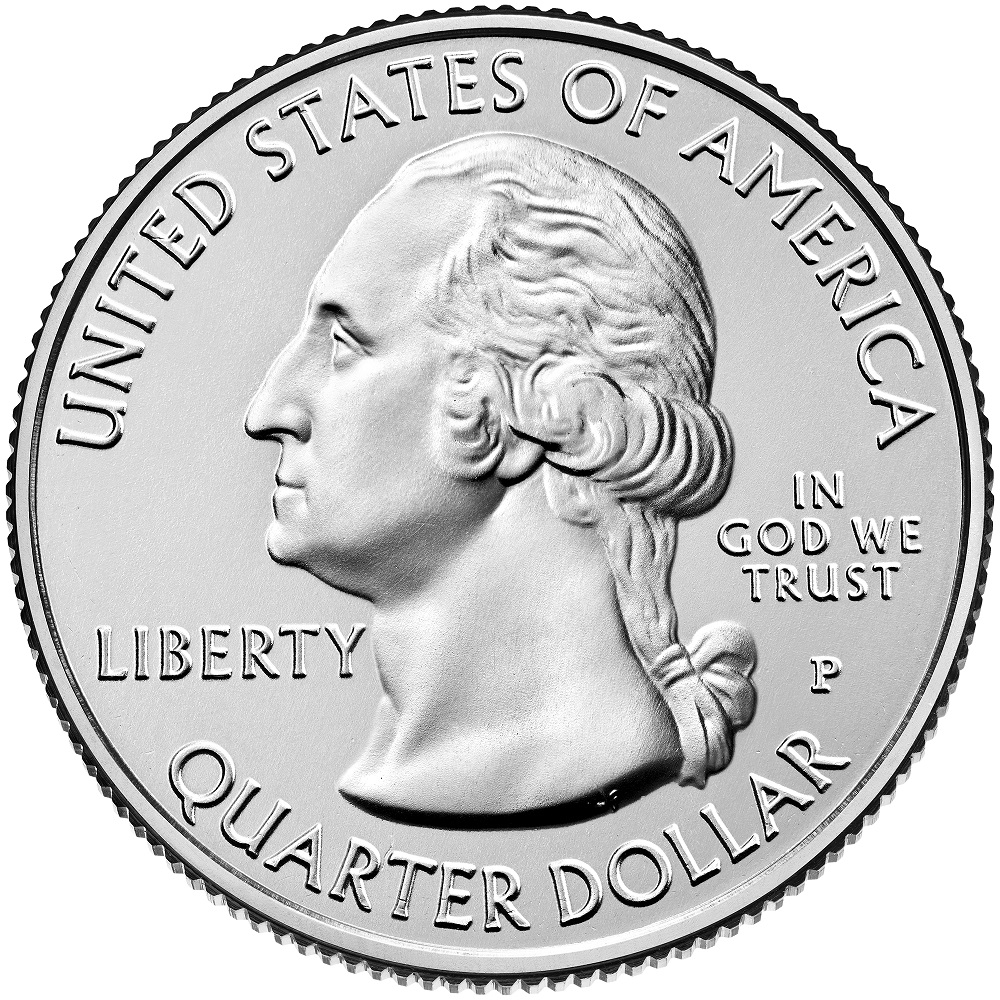 The obverse (heads) of the 2019 quarters will continue to feature the restored 1932 portrait of George Washington by sculptor John Flanagan. Required obverse inscriptions are UNITED STATES OF AMERICA, LIBERTY, IN GOD WE TRUST, and QUARTER DOLLAR.

Line art of the designs is available here.

2019 will mark the 10th year of the America the Beautiful Quarters Program, which is authorized by Public Law 110-456—the America’s Beautiful National Parks Quarter Dollar Coin Act of 2008. The Act directs the Mint to design, mint, and issue quarter-dollar coins emblematic of a national park or another national site in each state, the District of Columbia, and the five U.S. territories. As stipulated by the Act, the Mint is issuing five new quarters per year until 2020. The quarters will be issued in the order in which each honored site was first established. The final coin will be released in 2021.

About the United States Mint
Congress created the United States Mint in 1792 and the Mint became part of the Department of the Treasury in 1873. As the Nation’s sole manufacturer of legal tender coinage, the Mint is responsible for producing circulating coinage for the Nation to conduct its trade and commerce. The Mint also produces numismatic products, including Proof, Uncirculated, and commemorative coins; Congressional Gold Medals; silver and bronze medals; and silver and gold bullion coins. Its numismatic programs are self-sustaining and operate at no cost to taxpayers.