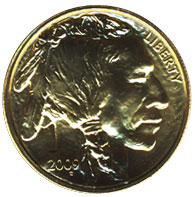 The US Mint sold a total of 232,000 ounces of gold across the two gold bullion offerings. This was comprised of 115,500 of the one ounce Gold Eagle and 116,500 of the one ounce Gold Buffalo. The 2009 American Gold Buffalo has been available since October 15, 2009. Pent up demand for this popular 24 karat gold coin contributed to a flood of opening sales. Last year, the US Mint sold 172,000 of the 2008 Gold Buffalo bullion coins for the entire year, amidst some suspensions.

Nearly 3 million one ounce Silver Eagle bullion coins were sold. This month represents the second highest monthly sales total for the year, behind March 2009 when 3,132,000 coins were sold. Notably, the year to date sales figures already places the 2009 Silver Eagle bullion coin in record sales territory. The previous record annual sales of 19,583,500 was reached in 2008.