Two and a half years into the popular 50 State Quarters Program, the United States Mint released a numismatic product chronicling the formation of the Union. The product included the first thirteen quarters of the series representing the original thirteen states, along with an extensive array of historical information to tell the story of the pivotal years between 1774 and 1792. 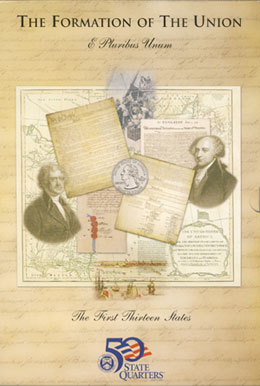 The Formation of the Union Set was indicated to be the third release within the “Coin & Chronicles” product line, created in partnership with the National Archives and Records Administration. The first two products were the George Washington and Yellowstone National Park folios, which were released in coordination with the 1999 commemorative coin programs. These folios included various historical documents but did not contain coins. 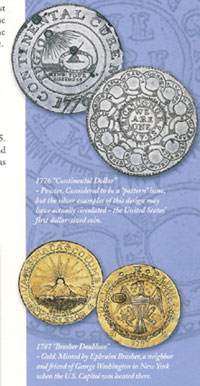 By contrast, the latest product incorporated both coins and historical information. Within an over-sized 28 page booklet, the story of the formation of the Union was told from the meeting of the First Continental Congress in 1774 to the ratification and the Bill of Rights. The account concludes with the story of the first United States Mint established under the Act of April 2, 1792 and the laying of the cornerstone for the first mint building. The pages incorporate images of many important historical documents, foreign coins that circulated within the early United States, as well as Colonial and early United States coin issues.

The actual coins included in the set were circulating quality examples of the first thirteen releases of the State Quarters Program from both the Philadelphia and Denver Mints. This included the coins issued in the prior years of 1999 and 2000, which the US Mint referred to as “the difficult-to-find early quarters.” The Philadelphia Mint coins were incorporated into an early map of the United States of America with a fold out for the Denver Mint issues.

The set was prefaced by a special message from President George W. Bush, describing the importance of the motto “E Pluribus Unum.” This represented the first time in history that a US Mint product has included a message from the President. 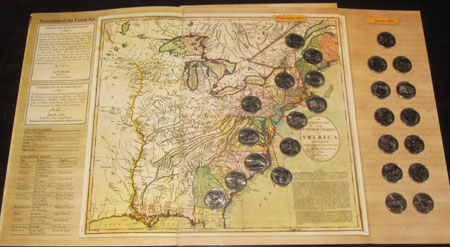 On June 18, 2001, the US Mint began accepting orders for the Formation of the Union Set, which was priced at $49.95 and carried a product limit of 50,000. With popularity for the State Quarters Program running high, more than 80% of the limit was sold by the end of September.

As with some other US Mint products of the past, these sets can now sometimes be found for less than the issue price. This provides collectors with the opportunity to acquire an interesting and historical product at a reduced price.