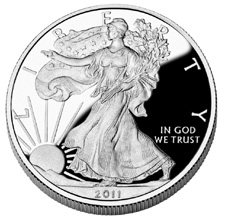 The US Mint operates six facilities and has approximately 1,800 employees. Their mission is to manufacture and distribute circulating coins, precious metals, collectible coins, and national medals to meet the needs of the United States. Revenue is generated through the sales of circulating coins to Federal Reserve Banks, the sale of bullion coins to authorized purchasers, and the sale of numismatic products to the public.

For the 2011 fiscal year, demand for circulating coinage rebounded after reaching the lowest levels in decades in the previous year. The costs to manufacture the cent and nickel rose to more than twice the face value, although seigniorage generated from other denominations offset the losses. Bullion coin sales achieved a record high in unit volume, dominated by sales of the American Silver Eagle. Revenue from the sale of numismatic products showed the strongest increase compared to the prior year, with net income more than doubling. The gains were driven by the release of both 2010 and 2011-dated Proof Silver Eagles during the fiscal year, the earlier release of annual sets, and new product launches.

This week Coin Update News will be providing additional detailed coverage of the 2011 financial results for each segment.

Despite the increase in seigniorage and net income, the US Mint transferred only $51 million to the Treasury General Fund. This was down dramatically from the previous year and attributed to uncertainties in future cash flow from circulating coin operations.