Representing the return of the product after a three year hiatus, the United States Mint has started accepting orders for the 2012 Annual Uncirculated Dollar Coin Set. These sets contain five golden colored $1 coins in addition to a collectible uncirculated American Silver Eagle. 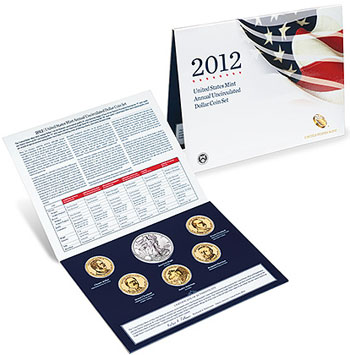 This product was previously released in 2007 and 2008, selling approximately 90,000 and 100,000 units for each year respectively. In 2009, the collectible uncirculated versions of the American Silver Eagle were cancelled, so the product was not offered as a result. In the following two years, the special sets were not offered either, although the issuance of collectible Silver Eagles was resumed.

The 2012 Annual Uncirculated Dollar Coin Set contains the four 2012 Presidential Dollars featuring Chester Arthur, Grover Cleveland (first and second terms), and Benjamin Harrison, with each coin struck at the Philadelphia Mint. Also included is an example of the 2012 Native American Dollar struck at the Denver Mint. The set is completed with the 2012-W Uncirculated Silver Eagle, which is the collectible version of the coin struck on specially burnished blanks.

The six coins are presented in a folder with descriptions and specifications for each coin, as well as a certificate of authenticity.

Pricing is $54.95 per set with no product limit or household ordering limits indicated. Orders may be placed online at http://catalog.usmint.gov.