A commemorative coin program authorized for next year will mark the 225th anniversary of the establishment of the Nation’s first Federal law enforcement agency, the United States Marshals Service. During a meeting held on March 20, the Commission of Fine Arts (CFA) had the opportunity to review design candidates for the upcoming coins and provide their recommendations.

The program will include proof and uncirculated versions of $5 gold coins, silver dollars, and clad half dollars. The authorizing legislation provides specific requirements for elements or themes to be featured on the obverse and reverse of each coin. The final designs for the coins will be selected by the Secretary of the Treasury following consultation with the Director of the United States Marshals Service and Commission of Fine Arts, as well as review by the Citizens Coinage Advisory Committee (CCAC).

The CCAC had reviewed the designs during a meeting held on March 10. Please refer to earlier coverage to see their recommendations and images of all design candidates provided by the United States Mint. 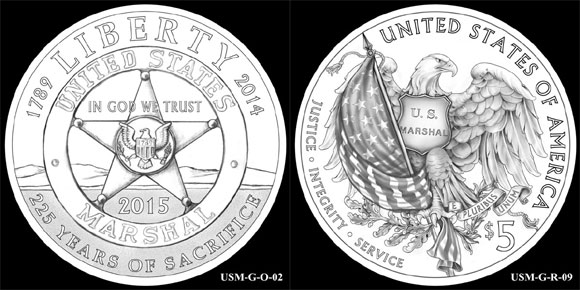 The 2015 US Marshals $5 Gold Coin is required to feature the image of the United States Marshals Service Star on the obverse and on the reverse a design emblematic of the sacrifice and service of the men and women of the US Marshals Service who lost their lives in the line of duty.  From a field of five obverse and eleven reverse design candidates, the CFA recommended the designs shown above, matching the recommendations offered by the CCAC. 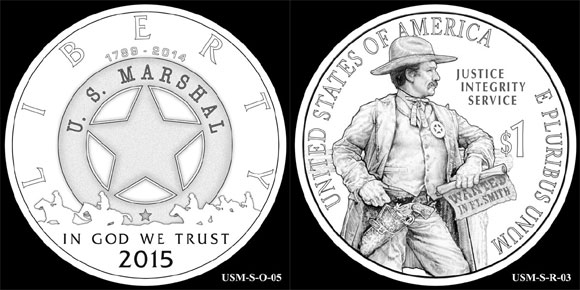 The authorizing legislation provides that the obverse design for the silver dollar is also to bear an image of the United States Marshals Service Star. For the reverse, the image is to depict Marshals as lawmen of the frontiers, including their geographic, political, or cultural history and include the motto “Justice, Integrity, Service.” From the five different obverse and eleven different reverse design candidates, the CFA recommended the design alternatives shown above with some suggested modifications. For the obverse, they suggested that the spacing between the letters in the word “Liberty” should be reduced to improve legibility and increase the separation between the inscription and the design elements at the bottom of the composition. For the reverse, they suggested removing the horizontal fence rail and retaining only the vertical post to improve the clarity of the composition.

The CCAC had also recommended the obverse design shown above, however, they had recommended a different alternative for the reverse. 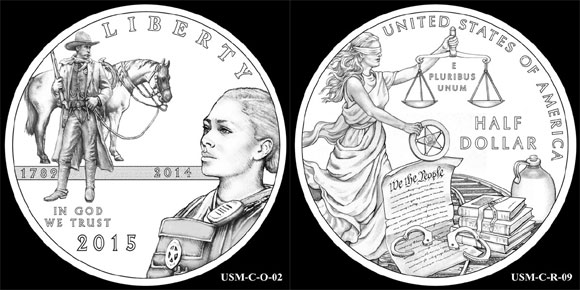 Similar to the other two coins of the program, the half dollar also has specific requirements for elements and themes to be depicted within the designs. The obverse is to bear an image emblematic of the United States Marshals Service and its history. The reverse is to bear an image consistent with the role the US Marshals Service had in changing the nation, as they were involved in some of the most pivotal social issues in American history. The design should show ties that the Marshals have to the United States Constitution, with themes including Whiskey Rebellion and the rule of law; slavery and the legacy of inequality; and the struggle between labor and capital.

The CCAC had recommended the same obverse design, but a different reverse design.

The Commission of Fine Arts meeting held on March 20 did not have a quorum present for review of the submission. As such, the recommendations will be placed on the administrative agenda for confirmation at the next meeting scheduled for April 17.