On September 16 the Royal Mint launched the fourth coin in their innovative and popular Lunar Year Series, which celebrates the beginning of the new year according to the Chinese lunar calendar. Each lunar year is linked to one of 12 animals whose traits are attributed to those born during that year. The next lunar year commences on January 28, 2017, and falls under the sign of the Rooster or Cockerel. 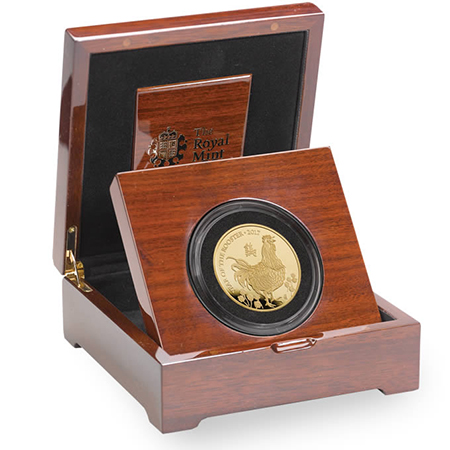 The coins are produced in a wide array of sizes. Gold issues are available as Brilliant Uncirculated tenth-ounce coins, and as one-ounce, five-ounce, and one-kilo Proofs. Silver Proofs are available in one and five ounces, and in one kilo. All coins in the range are limited, with mintages featuring the number 8, which is thought to be lucky in many Asian cultures. The reverse design, by British-Chinese artist and printmaker Wuon-Gean Ho, depicts a British breed of rooster amid blooms of sea-thrift. (Scroll down for more on the artist’s design choice.) 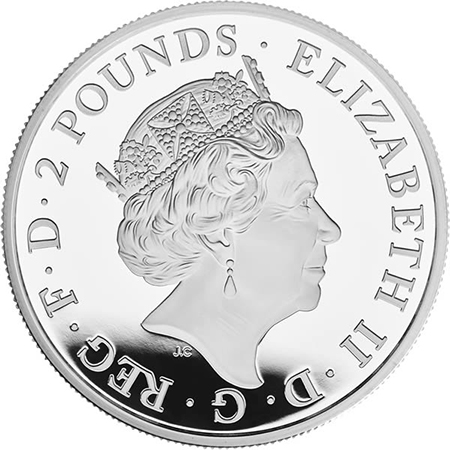 The obverse of the coins includes the fifth effigy of HM Queen Elizabeth II. The work of Royal Mint engraver Jody Clark, the portrait was introduced in 2015 on all circulation and many collector and commemorative coins.

The coins are supplied in bold red packaging with an explanatory booklet. Gold Proofs and the silver kilo are housed in custom-polished wood presentation cases; the silver coins are enclosed in matte black cases. 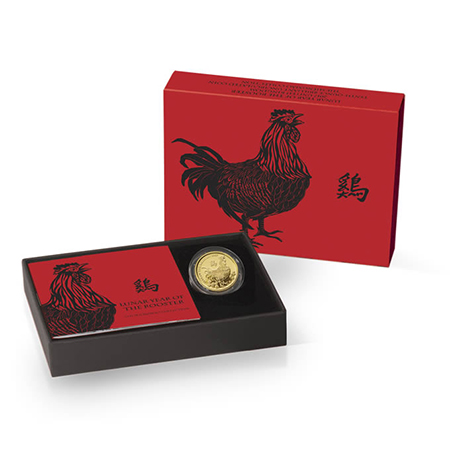 For more information on this and other coins offered by the Royal Mint, please visit their website. International orders are dispatched where applicable.

More About the 2017 Lunar Year Design 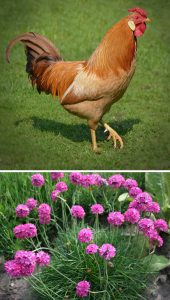 Marsh Daisy—the rooster and the flower.

Wuon-Gean Ho, designer of the Royal Mint’s lunar collection, has incorporated a bit of clever wordplay into her 2017 design. The rooster is a British breed, the Marsh Daisy, and the flowers are known both as marsh daisies and as sea-thrift. The word “thrift,” of course, also refers to the wise use of money. “The flowers in the design are also called marsh daisies, an affectionate name for the flower also known as sea-thrift, which is common to the areas where these birds live. In the past these flowers have also been portrayed on the three-penny (thrupenny) bit in the 1930s, so I thought it would be fun to bring the flowers to a contemporary coin,” says Wuon-Gean.

As for the rooster, Wuon-Gean says, “The breed I have depicted on the coin is a Marsh Daisy from the Lancashire/Liverpool area of the U.K. I wanted to root the design firmly in a real place. The Marsh Daisy is a gentle and friendly breed, well-adapted to sandy marshland. They are beautiful birds with a very flat, pillow-like comb called a rose-comb.”

People born in the year of the rooster are believed to be confident and to enjoy standing out from the crowd. Said to spend a great deal of time perfecting their appearance, they like to be thought of as attractive and beautiful, and are often very fashion conscious, relishing any opportunity to show off their style and charm. They are loyal and devoted friends and natural leaders in the workplace.

Chinese New Year, which begins on January 28, 2017, is traditionally a time for exchanging tokens and gifts of money in red envelopes, symbolizing good wishes for the recipient’s health, wealth, and prosperity.