The Royal Mint have launched (30th January) a new series of large-size gold and silver coins that mark the 65th year since HM Queen Elizabeth succeeded to the British throne—her Sapphire Jubilee. To date, only Queen Elizabeth II has reached this milestone date. The Queen surpassed the record for the longest-serving English or British sovereign on the 9th September 2015 when the previous record, achieved by her great-great-grandmother Queen Victoria reached 63 years and 216 days.

Princess Elizabeth, Duchess of Edinburgh and heir presumptive, acceded to the British throne on the death of her father, King George VI, on the 6th February 1952. At the time, she was 25 years old, a new wife, and mother of two young children. The Queen is not only head of state of the United Kingdom, she is head of state of 15 other realms, including Australia, Canada, and New Zealand. Presently, Queen Elizabeth II is not only the United Kingdom’s longest-reigning sovereign, she is the longest-reigning queen-regnant and female head of state in world history. At nearly 91 years old, the Queen and the British nation are eagerly looking forward to the prospect of her celebrating the 70th anniversary of her accession—or Platinum Jubilee—having attained her Silver, Golden, and Diamond jubilees in 1977, 2002, and 2012, respectively.

All three coins share the same reverse, designed by Gregory Cameron. At center is the royal crest or coat of arms topped with the crown of St. Edward and ornately framed and surrounded with oak and olive garlands. The number 65 is placed just below the crest, and the commemorative inscription, HER MAJESTY THE QUEEN’S SAPPHIRE JUBILEE 1952–2017, is placed along the rim and separated into two legends by the primary design.

The obverse includes the fifth effigy of HM Queen Elizabeth II, which is designed by Jody Clark and has been in use since 2015. The coin’s face value of 10 POUNDS or 500 POUNDS is included in the Queen’s legend around the effigy. 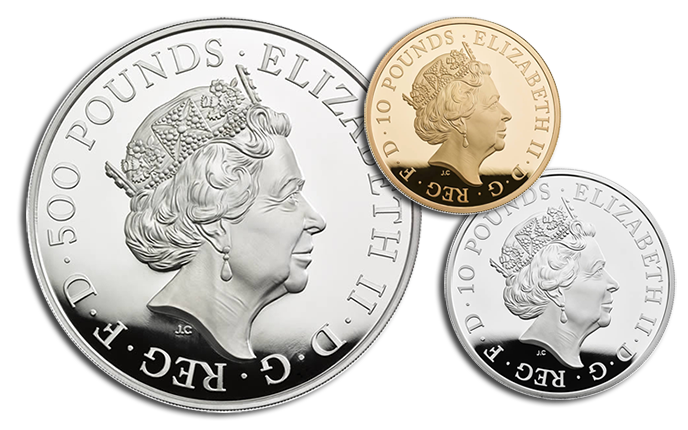 Each Proof-quality coin is presented in a clear capsule and housed in a custom display case, which is crafted from polished wood (for the 1-kilo silver coin or 5-ounce gold coin) and matte black (for the silver 5-ounce coin). All include a certificate of authenticity. For more information for these three collector coins with limited mintages, please visit the website of the Royal Mint.