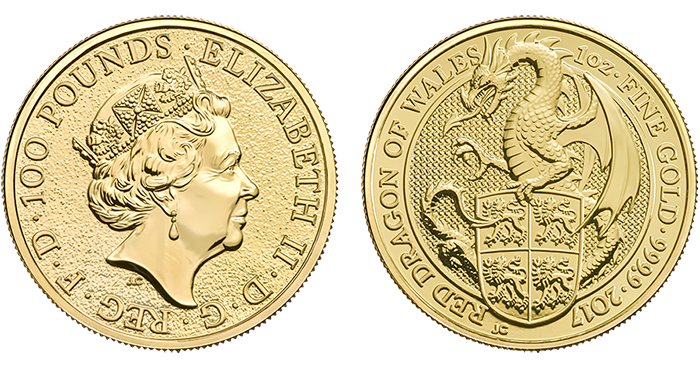 The Royal Mint have unveiled (3rd March) the third coin in their hugely successful bullion series “The Queen’s Beasts,” which features both mythical and actual creatures that feature prominently in British heraldry. The third subject is the Red Dragon of Wales.

Undoubtedly the best-known mythical beast, dragons are found in legends all over the world. In Wales, they are mentioned in chronicles as early as the sixth century. The Red Dragon of the Queen’s Beasts was an emblem of Owen Tudor, a claim to Welsh heritage that was carried on by his son, who would become Henry VII. The troops of Henry VII carried a fiery red dragon standard at the Battle of Bosworth, when Henry secured the crown of England. The dragon is red with a yellow underbelly and holds a quartered red-and-gold shield with leopards, representing the arms of Llewelyn ap Griffith (Gruffydd), the last native Prince of Wales. In Europe, the dragon was seen as a frightening creature, but strong, wise, and powerful. In modern U.K. coinage, the Welsh Dragon was featured on the circulation £1 coin during the years 1995 and 2000. The same reverse design was also featured on a British high-value silver coin of £20. 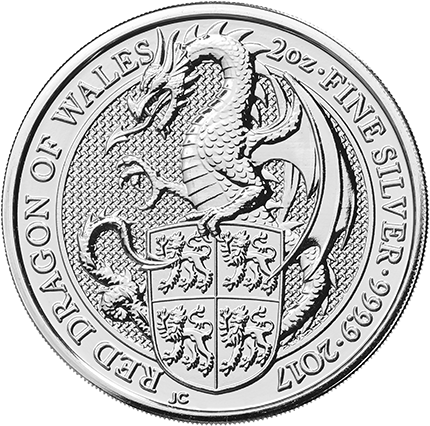 The reverse design, created by Jody Clark, includes the Red Dragon rampant, grasping the historical shield of four leopards quartered. The text RED DRAGON OF WALES, along with the weight, metal, and year of issue, completes the reverse design. 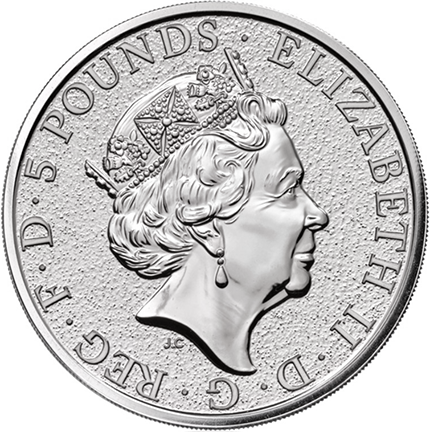 The obverse bears the fifth portrait of Her Majesty the Queen, also designed by Jody Clark and introduced on British coinage in 2015.

The coins are available in three sizes and weights: the gold 1-ounce and 1/4-ounce options and the silver 2-ounce option. The series, when concluded, will include 10 of these creatures, which recall hundreds of years of British royal heraldry. The series, which introduces one beast at a time, began last year with the gallant Lion of England (March 2016) and Griffin of Edward III (November 2016). (Proof versions have also been released.) Inspiration for the design of this series was taken from the actual Queen’s Beasts sculptures, each standing at around two meters or six feet tall, and created by James Woodford for the coronation ceremony of Queen Elizabeth II held in Westminster Abbey in 1953. The Queen’s Beasts sculptures can now be found at the Canadian Museum of History in Quebec, while Portland stone replicas, also carved by James Woodford, watch over Kew Gardens in the United Kingdom.

For additional information on these and other bullion-related coins offered by the Royal Mint, please visit their website, or contact a reputable bullion distributor in your local area.

The Queen’s Beasts and other bullion coins are also available from Coin Update sponsor APMEX.   ❑