On November 16 the Royal Mint launched the second design in a very successful bullion series that gives life to the amazing designs called “The Queen’s Beasts.” Now, what are exactly are these beasts? They are in fact, 10 creatures that have featured throughout hundreds of years of British royal heraldry. They are the sometimes mythical, sometimes real creatures who have represented strength, power, courage, and resolve throughout the ages, and they have featured prominently on many symbols of state or nation such as flags, crests, and certainly … coins.

The first beast depicted in this series was, appropriately, the gallant Lion of England. Although the emblem was made popular when King James I came to the throne in 1603, the symbol of a lion has stood for England far longer. Richard the Lionheart, son of King Henry II, established three golden lions as the Royal Arms of England, and lions have appeared on the coat of arms of every British sovereign since the 12th century. The second coin depicts the mythical griffin, which was thought to be strong and courageous, a watchful guardian with keen sight and swift action. It was closely associated with Edward III, who ruled for more than 50 years, and appeared on his private seal. 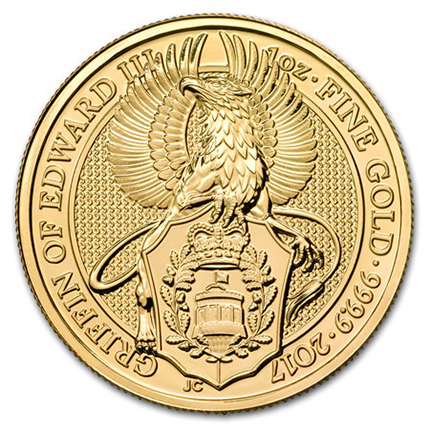 The 2017-dated coins include the new reverse design, which has been reimagined by Royal Mint coin designer Jody Clark and depicts a griffin standing on its hind legs with wings raised, its talons gripping a shield that features the badge of the House of Windsor, all against a background textured in a chain-mail pattern. The words GRIFFIN OF EDWARD III are placed along the left half of the primary design, with the metallic content and date along the right. With this new issue, the pose of the griffin reflects the convention whereby Royal portraits or effigies alternate left and right on U.K. coinage: whilst the lion faced right on the first coin, the griffin faces left, a pattern that will continue through the collection.

Following the convention whereby each British monarch’s portrait faces opposite the one that came before, the griffin faces left, where the lion faced right. 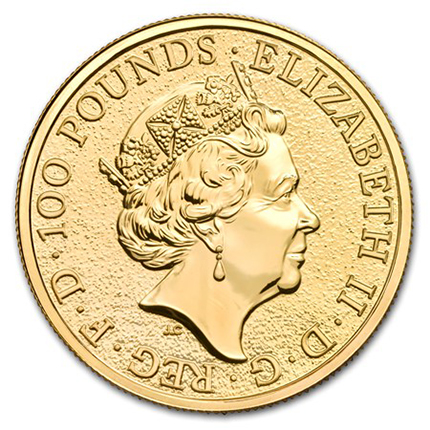 The designs are being released one beast at a time. The series was first introduced earlier this year. Investors may purchase the coins—which range in size from a full gold ounce to 1/10 ounce, along with a popular 2-ounce silver “piedfort”-type strike—from the Royal Mint. For more information on these and other coins offered by the Royal Mint, please visit their website, or contact your local bullion distributor. The 2016 and 2017 Queen’s Beasts coins can also be purchased from APMEX.

About the Queen’s Beasts Series 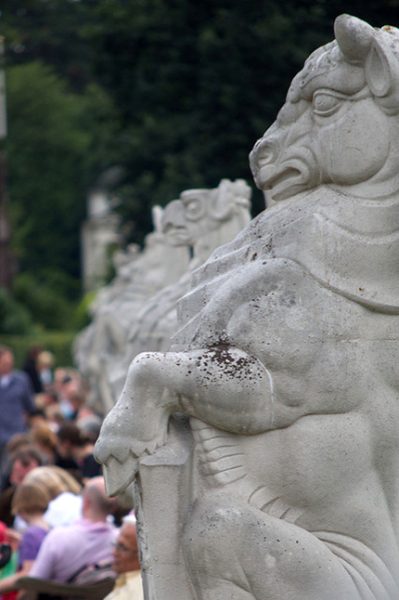 Inspiration for this series has been taken from the Queen’s Beasts sculptures, each standing at around 2 meters (or six and a half feet) tall. Originally created by James Woodford RA for the coronation ceremony of Her Majesty, the heraldic creatures symbolized the various strands of royal ancestry brought together in a young woman about to be crowned queen with great pageantry in Westminster Abbey in June 1953. Each beast, used as a heraldic badge by generations that went before her, was inspired by the King’s Beasts of Henry VIII, which still line the bridge over the moat at his Hampton Court Palace.  ❑

More on the Queen’s Beasts bullion coins, including the members of the rest of the series, can be found on Coin Update’s sister site, World Mint News Blog.