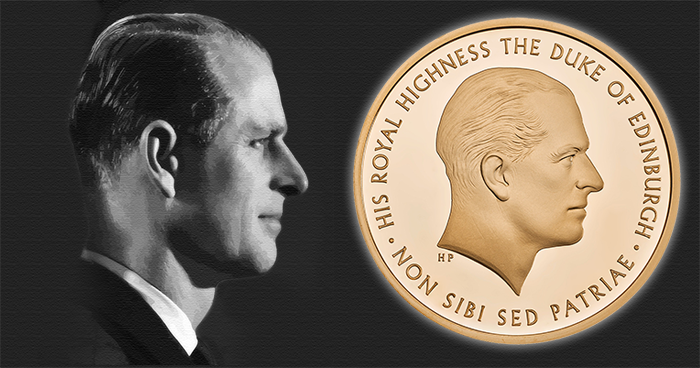 It was announced today that special crown coins will be issued in August to pay tribute to the lifetime of official service which HRH Prince Philip, the Duke of Edinburgh, has given to the nation. It was announced by Buckingham Palace on the 4th May that the 96-year-old consort of the Queen would be retiring later in the year and would no longer carry out official engagements on behalf of the sovereign. It was also announced as part of the statement that Her Majesty the Queen, who is herself 91 years old, entirely supports the Duke’s decision to retire from public life. Aside from having undertaken official duties on behalf of his wife—who became queen on the 6th February 1952—for all of the years of their marriage, the Duke founded the Duke of Edinburgh’s Award, a youth awards programme established in the United Kingdom in 1956 which recognises adolescents and young adults for completing a series of self-improvement exercises that build confidence and self-esteem. His Royal Highness also has a close relationship with projects associated with the Royal Mint and the coinage of the realm, as he served as president of the Royal Mint Advisory Committee from 1952 until 1999—an unbroken period of 47 years. Every U.K. coin and medal produced by the Royal Mint over this time, including the choice of four numismatic portraits of the Queen which appeared from 1968 to 1998, was discussed and approved by the committee he chaired.

The coin’s first-strike ceremony was held today at the Royal Mint and at their new, purpose-built visitor’s centre, where HRH Prince Charles, Prince of Wales, had the distinct honour of striking the very first tributary crown to his father. It is thought that this was a very special moment for the Prince, with the reverse of the coin bearing an image of his father, Prince Philip, and the obverse of the coin featuring a portrait of his mother, the Queen.

Prince Charles actuates the first strike (above) and inspects the finished coin (below).

During his visit, the Prince of Wales took a tour through the Royal Mint’s visitor attraction, “The Royal Mint Experience,” which was opened in 2016, and visited the coin-press room, where he met the Royal Mint staff involved in the production of the newly designed 12-sided £1 coin introduced into circulation in March of this year.

The crown’s reverse includes a profile portrait of HRH the Duke of Edinburgh which was originally sculpted by Humphrey Paget OBE (1893–1974), which was first used on a medal and which was Paget’s last major commission before his retirement. The obverse includes the fifth effigy of HM Queen Elizabeth II as created by Royal Mint engraver Jody Clark and used on all British coinage since 2015. The design was interpreted for use on coinage by Lee R. Jones, coin designer at the Royal Mint, and personally approved by Prince Philip.

The Prince Philip Retirement coin will be available in gold Proof and silver Proof precious-metal finishes, as well as in collectible Brilliant Uncirculated editions. The coin goes on sale on the 7th August but the public can register their interest in the coin at http://www.royalmint.com/pre-register/prince-philip.   ❑