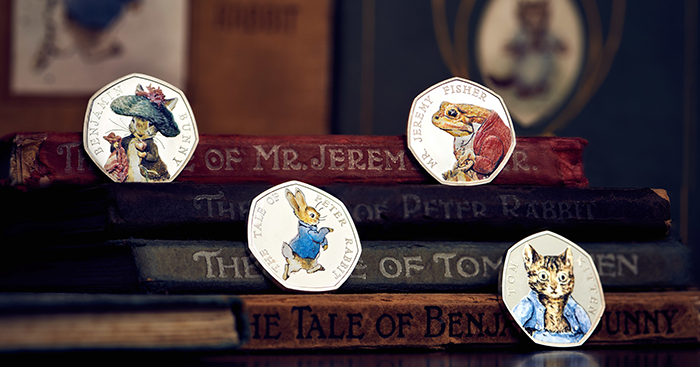 Updated April 4 at 9 p.m. to clarify which coins were released April 3, and to add the image of the BU Peter Rabbit coin.

The Royal Mint have launched (3rd April) their newest additions to their series of coins featuring the lovable and charming characters of author Beatrix Potter—those of Peter Rabbit and chums. The new series follows on the immensely successful coins issued last year, which gave pride of place on British coinage to Peter Rabbit, Jemima Puddle-duck, Squirrel Nutkin, and Mrs. Tiggywinkle. They are now joined by their friends Benjamin Bunny, Tom Kitten, and Mr. Jeremy Fisher, as well as the first coin of the series to be released: a new rendition of their ringleader, Peter Rabbit.

The 2017 edition of Peter Rabbit, released April 3. The 30,000 colour Proof strikes (left) sold out quickly; the BU coins have no mintage limit.

The Tale of Peter Rabbit is one of the world’s best-loved children’s books and was created by author and illustrator Beatrix Potter in 1902. The story has never been out of print since then and has sold in excess of 45 million copies globally. Beatrix Potter personally oversaw the launch of subsequent products, making Peter Rabbit the oldest licensed character in history. Today, more than 2 million of her “little books” are sold globally every year, whilst Peter Rabbit has appeared in books and products in more than 110 countries throughout the world. On her death, Beatrix left an incredible legacy of land and property to the care of The National Trust to ensure that future generations would continue to enjoy the countryside that she was so passionate about as well as the much-loved characters and stories that were created over a lifetime. 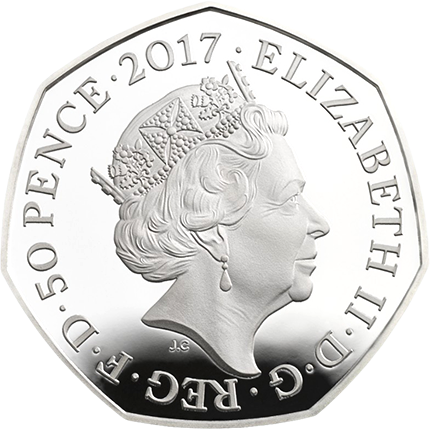 Royal Mint designer Emma Noble was chosen to immortalise Potter’s much-loved illustrations for the 2017 coin collection. Each coin’s obverse side bears the fifth definitive portrait of The Queen by Royal Mint engraver Jody Clark, first introduced to U.K. coinage in 2015. 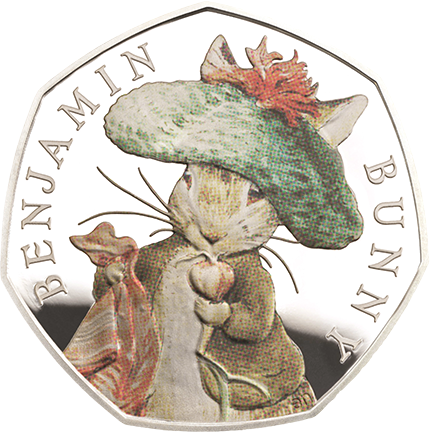 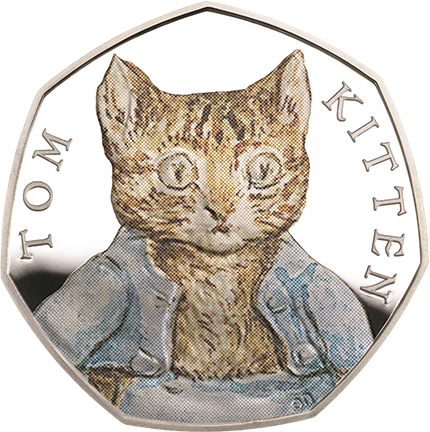 Tom Kitten. First making an appearance in September 1907, this children’s tale begins with three feline siblings named Mittens, Tom Kitten, and Moppet. The kittens’ mother, Mrs. Tabitha Twitchit, expects “fine company” for tea so she fetches her kittens indoors to wash and dress them before her friends arrive. She dresses Moppet and Mittens in clean pinafores and tuckers, and Tom in “all sorts of elegant uncomfortable clothes.” Their clothes don’t stay clean and pristine for long, certainly not long enough to meet their mother’s fine company. 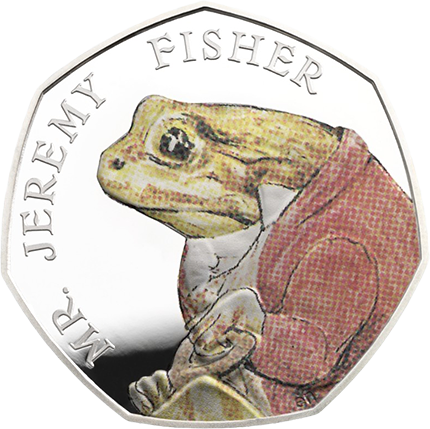 Jeremy Fisher. Jeremy first appeared in 1906 in The Tale of Jeremy Fisher, which chronicles the trials and tribulations of a frog who lives in a “slippy-sloppy” house at the edge of a pond. One rainy day he collects worms for fishing and sets off across the pond on his lily-pad boat. He plans to invite his friends for dinner if he catches more than five minnows. He encounters all sorts of setbacks to his goal, including an encounter with a large trout who tries to swallow him. He swims to shore, decides he will not go fishing again, and hops home.

The unmistakable, hand-painted style of Beatrix Potter’s original illustrations is captured on the silver Proof coins in vivid, colour-printed designs, capturing the intense red of Jeremy Fisher’s jacket, the blue of Tom Kitten’s pyjamas, and the green of Benjamin Bunny’s hat. The Brilliant Uncirculated coins are packaged in colourful folders with the unmistakable style of the Beatrix Potter illustrations shown on the coins. The Proof coins are presented in custom clear frame cases that are protected with an outer box and include a certificate of authenticity.

Please visit the website of the Royal Mint for more information on these and other coins the mint offers.   ❑
Share: