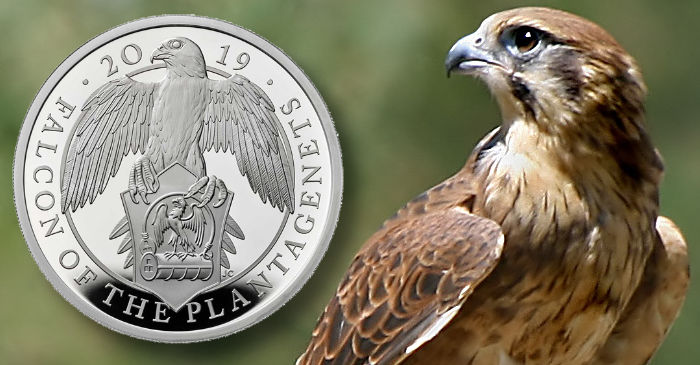 The Royal Mint has released the latest coin in the “Queen’s Beasts,” the very popular coin series which focuses on both real and mythical animals and beasts which are prevalent in heraldry and medieval crests. The fifth coin, in what will be a series of 10 beasts when completed, features the Falcon of the Plantagenets — the dynasty which held the English throne from 1154 with the accession of King Henry II until 1485, and the accession of Henry Tudor, known as King Henry VII.

Skilled hunters, falcons were highly prized among the ruling nobility with the care and cultivation of falconry becoming both a sport and activity for the ruling classes. Adopted as an emblem by Edward III, (ruled 1327–1377) the falcon would become closely associated with the House of York, a cadet branch of the Plantagenets. He chose the symbol to embody his love of hawking, but it is also closely associated with his great-great-grandson, Edward IV. The insignia of the falcon passed to the present Queen from the Plantagenet King Edward III, and it was the white falcon at the Queen’s coronation that was shown holding a shield with a badge depicting a second white falcon within an open golden fetterlock (or padlock).

The fetterlock and the falcon were popular emblems in the houses of both York and Lancaster, as they had both descended from Edward III’s younger sons, John of Gaunt and Edmund of Langley. The fetterlocks used by John and Edmund were always locked, perhaps to show they had no claim to the throne. Edward IV gave his younger son, Richard, the badge of a white falcon within an open fetterlock — the lock Edward used as credentials to take the throne. It was King Henry VII who united the houses of York and Lancaster with his marriage to Elizabeth of York, and he often used a falcon symbol and it was said to be the favourite badge of Queen Elizabeth I, granddaughter of Henry VII. 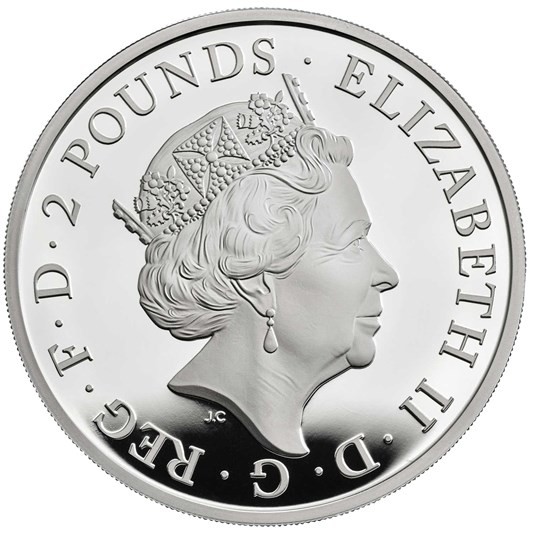 Obverse of the silver one-ounce coin.

The designs on both sides are the work of Jody Clark, who is a member of the Royal Mint design team. Jody is best known for the fifth effigy of HM the Queen, which was included on all United Kingdom coinage since the portrait was unveiled in 2015. Jody has also spent a great deal of time researching British heraldry to come up with the designs of the Queen’s Beasts issued thus far. 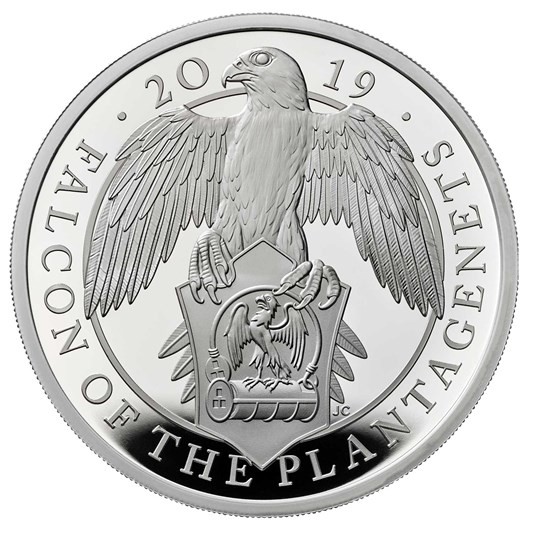 Reverse of the silver one-ounce coin.

The reverse side depicts a falcon with wings spread, clutching the shield of the Plantagenets in its talons. The historical shield also depicts a falcon and open fetterlock. This was originally the badge of the first Duke of York, Edmund Langley, who used the Falcon of the Plantagenets in a golden fetterlock. This was also used by his grandson Richard of York, who displayed the fetterlock opened. The text FALCON OF THE PLANTAGENETS is placed below the primary design along the lower rim while the year of issue is placed above and between the falcon, seen in two digits on either side.

The 2019-dated coins are available in a variety of versions, from base metal cupro-nickel pieces struck in Brilliant Uncirculated quality to silver one-ounce, five, 10, and one-kilo sized pieces. The gold varieties consist of a quarter, one-ounce, and five-ounce pieces struck in Proof quality. 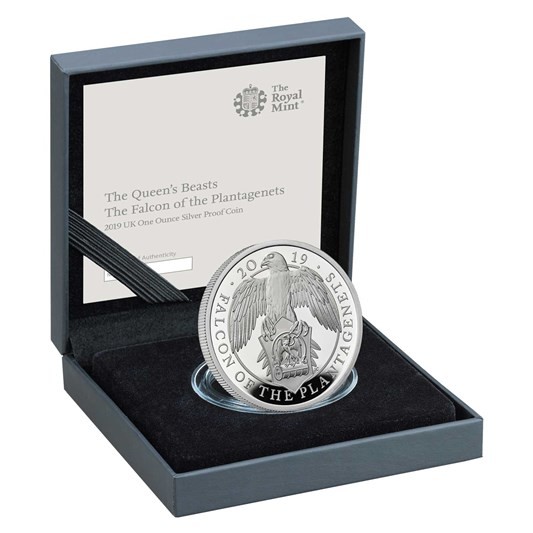 Each of the precious metal examples is specially encapsulated and presented in a custom case to accommodate their specific sizes, and are accompanied by a numbered certificate of authenticity and booklet detailing the background information of the particular Queen’s beast featured.

The cupro-nickel Brilliant Uncirculated version is presented in a colourful folder with images illustrating the latest design featured.

The Falcon of the Plantagenets joins the four previously released designs in this exciting and imaginative series, including the Black Bull of Clarence, the Unicorn of Scotland, the Lion of England, and the Red Dragon of Wales. For more information about these coins and others in the Queen’s series, please visit the website of the Royal Mint.