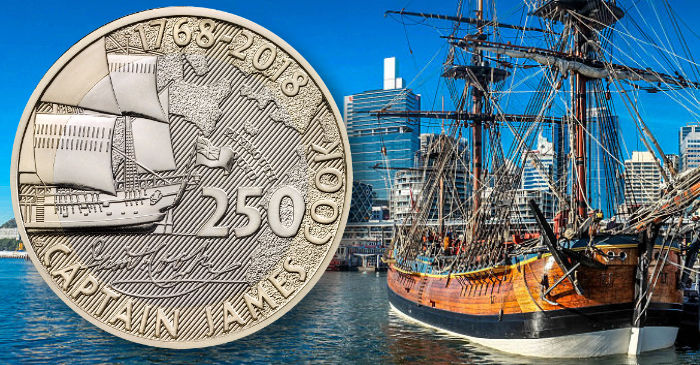 The Royal Mint has launched (11th June) a new three-year series which will mark the 250th anniversary of Captain Cook’s epic voyage of discovery aboard HM Bark Endeavour.

The son of a farm hand, Captain James Cook (1728–1779) grew up in the historic port of Whitby from the age of 17. As a young man, James Cook dreamed of escaping  to a life on the seas. He studied mathematics and astronomy — both important skills for navigation. When he joined the Royal Navy at the age of 26, Cook became known for his cartography abilities, and in the early 1760s, he produced a map of Newfoundland so accurate that it continued to be used until the 20th century. So, when plans were made for a scientific voyage to Tahiti to observe the transit of Venus and discover new people, plants, and places, Cook was an obvious choice as captain. In August 1768, Cook and his crew set sail on the HM Bark Endeavour, commencing what would become a three-year voyage of discovery. It was the first of three such journeys for the intrepid pioneer, during which he would circumnavigate the world twice. His spirit of adventure helped to fill in the blanks on the world map and improve our knowledge of new places, peoples, plants, and even other planets.

The ship that carried Captain James Cook through his daring expedition was the Endeavour. The term “bark” (sometimes spelled “barc” or “barque”) describes a sailing vessel with three masts. Cook’s ship was originally a coal ship, or collier, called Earl of Pembroke, which was purchased by the navy and refitted for the voyage. Robust, but shallow of draught, able to withstand the power of the sea, but navigate shallow waters, the vessel proved to be perfect for the journey ahead. By November 1768, Cook had crossed the equator and reached Rio de Janeiro. Captain Cook’s primary objective was to sail to Tahiti to observe the transit of Venus across the sun — a rare astronomical event. However, there were rumours of a “great southern continent” hidden at the bottom of the globe, and he also carried a second set of orders that were to remain sealed. Captain James Cook charted more of the planet than any other historical figure, establishing Britain’s reputation as a nation with a spirit of adventure.

A series of three £2 coins, released each year from 2018 to 2020, will explore Captain Cook’s voyage of discovery and commemorate a particular event or discovery for that year. The coins carry three intriguing designs by sculptor Gary Breeze, which combine to create a single, complete image that tells the story of Captain Cook’s voyage. The 2018-dated £2 coin features the first of a three-part puzzle-themed design that will build to tell the story of Captain Cook’s adventure.

Each coin includes the fifth effigy of HM Queen Elizabeth II, as created by Royal Mint engraver Jody Clark, which was introduced onto all circulation coinage in the UK in March 2015.

Presented in a Royal Mint case, each Proof coin will be issued annually in a low mintage. Collectors wishing to ensure completion of the series can pre-order the three-coin series while ordering the first coin in either gold or silver. Those ordering all three coins in the series will receive the 2020 coin in a custom three-coin case, exclusive to subscribers. The Brilliant Uncirculated base metal versions will receive a specially produced folder to accommodate all three coins. For additional information on these coins and other coins available from the Royal Mint, please visit their website.