On 1st January, the Royal Mint launched a new crown coin in remembrance of the millennial anniversary of the crowning of Canute, the English king who unified the whole of the realm under one authority in 1017. Canute is credited with expanding his authority in what was informally referred to as the North Sea Empire, which comprised England, Denmark, Norway, and parts of Sweden. It was this unified English kingdom that was eventually brought under the control of William the Conqueror in 1066. The new coin marks the 1,000th anniversary of Canute’s coronation, which took place on the 6th January 1017 in Oxford. This new crown is the first time that a 1,000-year anniversary has been celebrated on any Royal Mint coin.

The coin is designed by Lee R. Jones and includes a stylised profile effigy of Canute facing toward the left, as he was depicted on the silver pennies minted during his reign. (An example of the latter is shown in the slideshow below.) The text 1017 King Canute 2017 is positioned just to the right of the portrait and as four lines of text.

The obverse includes the fifth effigy of HM Queen Elizabeth II, which is designed by Jody Clark and has been in use since 2015.

The precious-metal versions include the edge lettering TIME AND TIDE WAIT FOR NO MAN. The Brilliant Uncirculated coin is encased in a colourful presentation blister-pack folder. The silver Proof editions are issued in both traditional crown and piedfort strikes; each is housed in a custom presentation case with certificate of authenticity. The gold piece is housed in a custom-crafted wood case with CoA. For more information on these and other coins offered by the Royal Mint, please visit their website.

The son of Sweyn Forkbeard, King of Denmark (960–1014), Canute (c. 995–1030; “Knut” in Danish) was also Danish. Although he was neither a Briton nor an Anglo-Saxon, history has indicated that Canute was most likely “the most effective king in Anglo-Saxon history.” Much of this greatness was due to the protection he now lent to his new kingdom against Viking raiders, many of them formerly under his own command. This protection restored the prosperity that had been increasingly impaired since the resumption of Viking attacks in the 980’s. 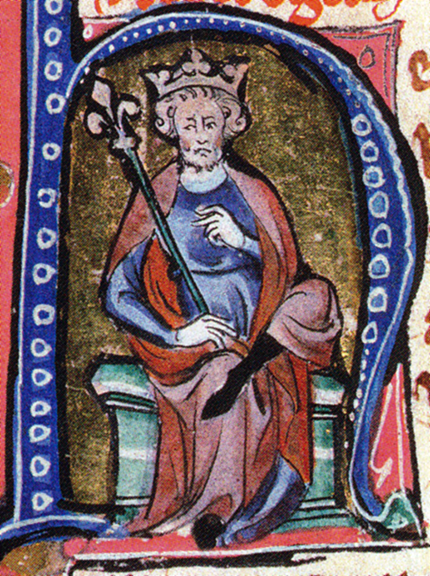 King Canute, as depicted in an illuminated manuscript. (Wikimedia photo)

The resources he commanded in England also helped him to establish control of the majority of Scandinavia. Canute as a Prince of Denmark eventually won control of the English throne through years of Viking activity, which he managed to bring under his own control to great effectiveness. Canute was intent on taking the English crown for himself, and in the summer of 1015, his fleet set sail from Denmark with an army of at least 10,000 soldiers (or Vikings) in 200 longships. Canute headed this army of Vikings from all over Scandinavia, whose grisly task it was to engage in often close and intense warfare with the English for the next 14 months. Most of the fighting was with soldiers loyal to King Athelred II (966–1016) and to his son Edmund Ironside (c. 993–1016), who was elected king after the death of Athelred on the 23rd April 1016. As part of Canute’s strategy early in 1016, the Vikings crossed the Thames and harried Warwickshire while Edmund Ironside remained in London, still unsubdued behind its famous impenetrable walls.

By the 18th October 1016, the Danes were engaged by Edmund’s army in northwest Essex; in the ensuing struggle, Edmund fled westward, with Canute in hot pursuit all the way to Gloucestershire. They ultimately traveled to an island near Deerhurst, where Canute and Edmund—who was by this time wounded—negotiated terms of peace. Their agreement stipulated that all of England north of the Thames was to be the domain of the Danish prince, while all to the south, London included, would remain in the realm of the English king. However, accession to the entire realm would pass to Canute upon the passing of Edmund, who mysteriously died on the 30th November, just weeks after the agreement between the two kings went into effect. Though the circumstances of his death are unknown, it was long suspected that Edmund may have been poisoned. In accordance with the treaty, Canute was left as sole king of all of England. His coronation in London on Christmas 1016 was also formalised in the presence of the nobility on the 6th January 1017 at Oxford.

Canute eventually succeeded to the Danish throne in 1018 after the death of his elder brother Harald; this resulted in the unification of England and Denmark as one kingdom. His acquisition of the Norwegian throne in 1028 and parts of Sweden placed the three richest and most powerful thrones under the crown of one man, and by 1030 created a North Sea Empire. Having wed Queen Emma (985–1052)—the widow of the deceased King Athelred and also the daughter of Richard, First Duke of Normandy—in July 1017, Canute was poised to eliminate any other challengers to his newly unified throne. These challengers included the sons of the late King Edmund Ironside, who fled abroad, and the sons of Athelred and Emma, who took refuge with their relatives in Normandy. One of these sons, known in history as Edward the Confessor (1003–1066), would father the man who would conquer England in 1066 and be remembered as William I, the first Norman king of England.

On the death of his grandfather, King Gorm of Denmark (died 958), Canute had been baptised as a consequence of Christianisation of much of Scandinavia. He was given the name Lambert at his christening, but it was not clear whether he adopted his new religion or it was merely a means to reconcile himself with churchmen who were influential in both England and Ireland. In any event, he restored many of the churches’ coffers after his recognition as king, and even repaired the monasteries that had been destroyed during the Viking plunders. Canute also journeyed to Rome to attend the coronation of Holy Roman Emperor Conrad II (990–1039) and to improve relations between the Holy See and England.

On the 12th November 1035, at the age of 40, Canute died. He was succeeded in England by his son Harold (known as Harefoot), who reigned first as regent for his elder brother, Canute III, and was eventually crowned King in 1037 when his brother had been deemed “to be away too long” by his eventual influential supporters. Harold, who died in 1040, was succeeded by the rightful heir, Canute III, who died in 1042. The English throne eventually found itself in the possession of the former Royal House of Wessex in the person of Edward the Confessor, son of Athelred and half-brother to Canute III.

Edward lived until 1066. Thereafter, a chain of events led to the invasion and eventual conquering of England by William (1028–1087), the illegitimate son of Robert, Duke of Normandy (brother of Queen Emma, widow of Athelred and then of Canute of England and Denmark). William was crowned in Westminster Cathedral on the 25th December 1066, exactly 50 years after the coronation of Canute, the man who had unified the whole of England under one crown.  ❑

[The King Canute coronation millennial coins can also be purchased from APMEX.]