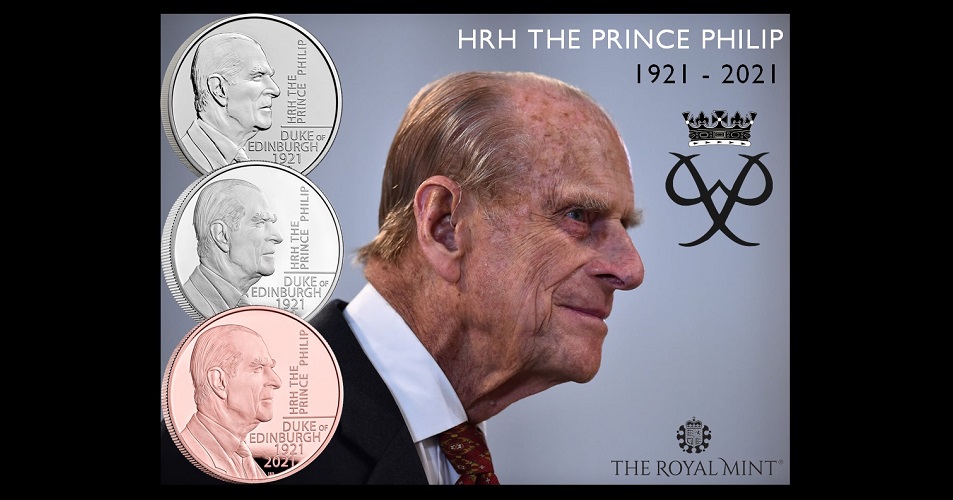 The Royal Mint has released (26th June) memorial coins in remembrance of His Royal Highness Prince Philip, the Duke of Edinburgh (1921–2021), who was the husband of Queen Elizabeth II, having served longer than any previous English or British consort to the sovereign. Prince Philip passed away on the 9th April, two months short of what would have been his 100th birthday. As the Duke of Edinburgh had quite a close link to British coinage from the very start of his wife’s reign, the Royal Mint released a message of condolence from the Chief Operating Officer on the day of his passing. The Duke of Edinburgh’s long association with the Royal Mint began when he assumed the presidency of the Royal Mint Advisory Committee (RMAC) in 1952, retiring from the Committee in 1999 after 47 years of service. During his presidency of the RMAC, he oversaw the introduction of four new definitive coin effigies of the Queen as well as the changeover to decimalisation from 1968 to 1971. 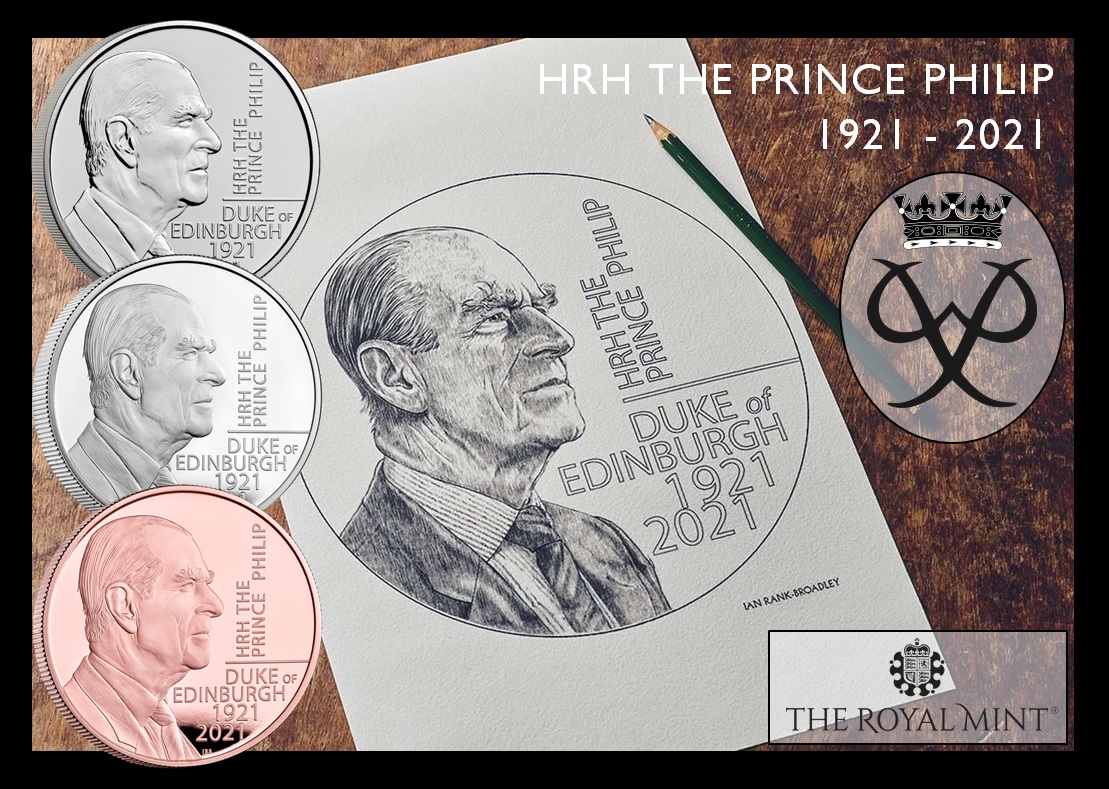 During an arranged meeting of the royal family in 1939, Prince Philip first met Princess Elizabeth, the elder daughter of King George VI. He was 18 years old and the princess was just 13. Both managed to keep up a correspondence with each other during the war and grew closer after the war had ended. The young couple had announced their engagement in July 1947, some months after the 21st birthday of Princess Elizabeth. However, before Prince Philip could marry the heir presumptive to the British throne, Philip would need to renounce his right to the Greek and Danish thrones, which he did on the 28th February 1947. Aside from this act, he assumed his mother’s surname, Mountbatten, and became a British subject.

Finally, in May 2017 it was announced that Prince Philip, who was one of the busiest members of the British royal family — and who had undertaken more than 22,000 solo appearances over seven decades of service — would officially retire from public engagements, with his last solo event having taken place on the 2nd August 2017.

The coins are designed by veteran royal portrait artist and eminent British sculptor Ian Rank-Broadley FRBS, whose depiction of the prince was created during a series of sittings in the Library of Prince Philip in 2008. Personally approved by Prince Philip, the portrait shows him facing to the right, dressed in a collared shirt, tie, and blazer. The memorial coin bears the inscription HRH THE PRINCE PHILIP in a vertical direction and DUKE OF EDINBURGH 1921-2021 shown horizontally.

The obverse side includes the fifth definitive effigy of HM Queen Elizabeth II created by Jody Clark that was introduced onto all British circulation and commemorative coins in 2015. The denomination from 5 POUNDS to 2000 POUNDS and the year of release, 2021, are included in the legend surrounding the Queen’s likeness.

The cupro-nickel £5 crown is presented in a blister-type folder and includes illustrations and text about the life of Prince Philip.

The one-kilo, 10-ounce, five-ounce and one-ounce silver Proof-quality coins are encapsulated and presented in a selection of custom cases according to their size and are accompanied by a certificate of authenticity and informative booklet. 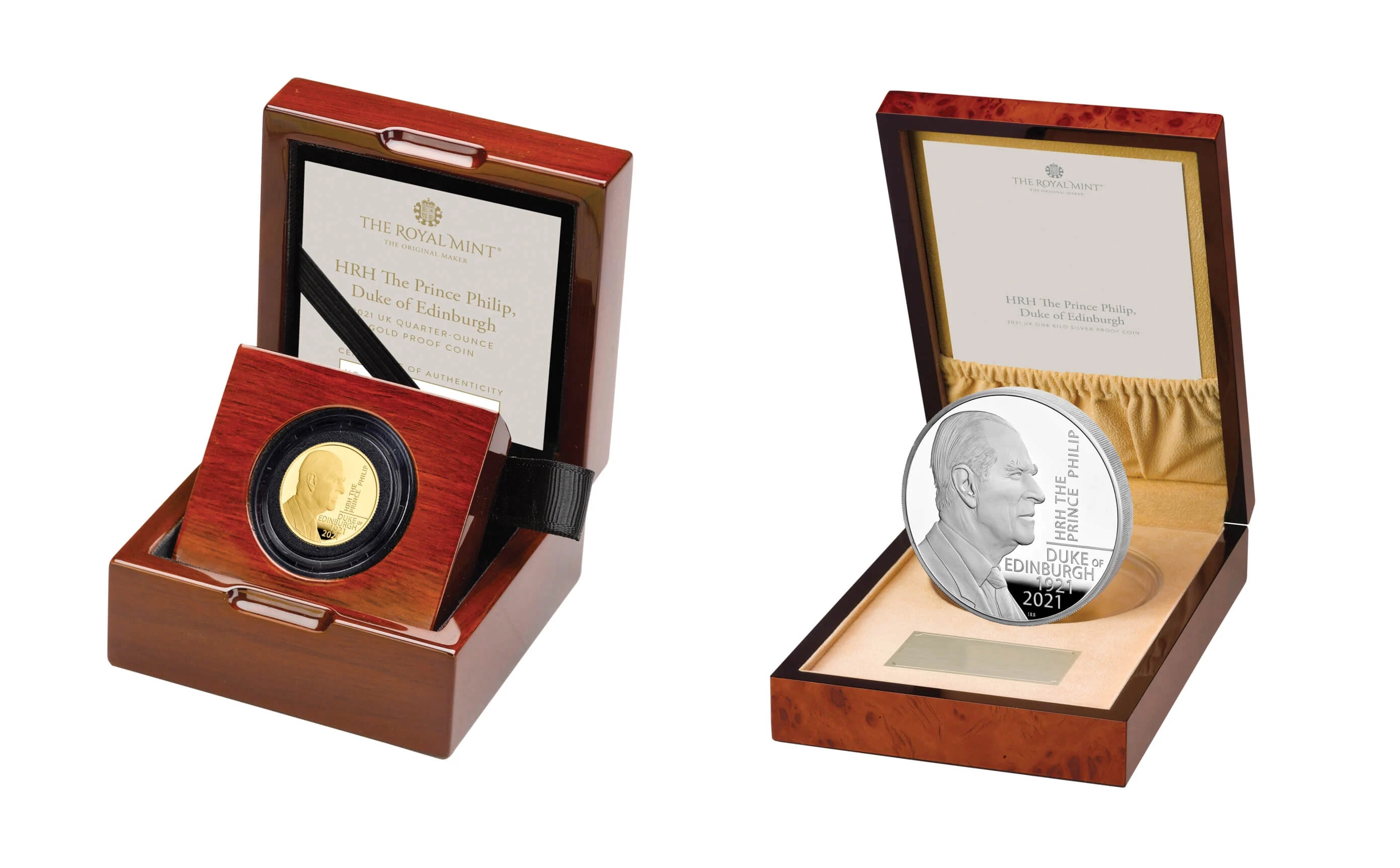 The gold two-kilo, one-kilo, five-ounce, and two-ounce Proof-quality coins are encapsulated and presented in a selection of custom polished hardwood cases and are accompanied by a certificate of authenticity and informative booklet.

For additional information about the entire range, please visit the website of the Royal Mint.