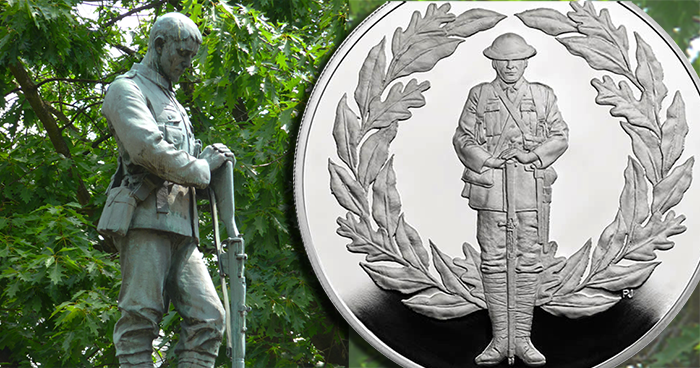 The Royal Mint have issued (6th July) the fourth coin in a series of five 5-ounce gold and silver coins commemorating the centennial of the First World War, from “Outbreak to Armistice” (as the program is called). The programme began in 2014, the 100th year since Europe found itself in what was described as the “war to end all wars”—which, sadly, was not to be. What came to be called as the Great War was followed just 19 years later by an even greater conflict: World War II. For four more years, the great powers within Europe—and later the United States and fragments of the declining Ottoman Empire—would fight for pre-eminence not only on the European continent but internationally. The fall of four of those once-great Empires, Germany, Austria-Hungary, Russia, and the Ottoman Empire, resulted in the re-drawing of centuries-old borders both in Europe and in the Middle East and Africa; and on the west side of the Atlantic, the ascendancy of the United States as a superpower.

On the 11th day of the 11th month, 1918, after so much desperate struggle and the loss of literally millions of lives as a result of warfare not previously seen, the belligerents signed an Armistice whereby Germany and Austria-Hungary surrendered to the Allied forces of Great Britain, France, and the United States. The day of this Armistice is still celebrated on the 11th November—and this day will be especially remembered next year, the 100th anniversary of Armistice Day. 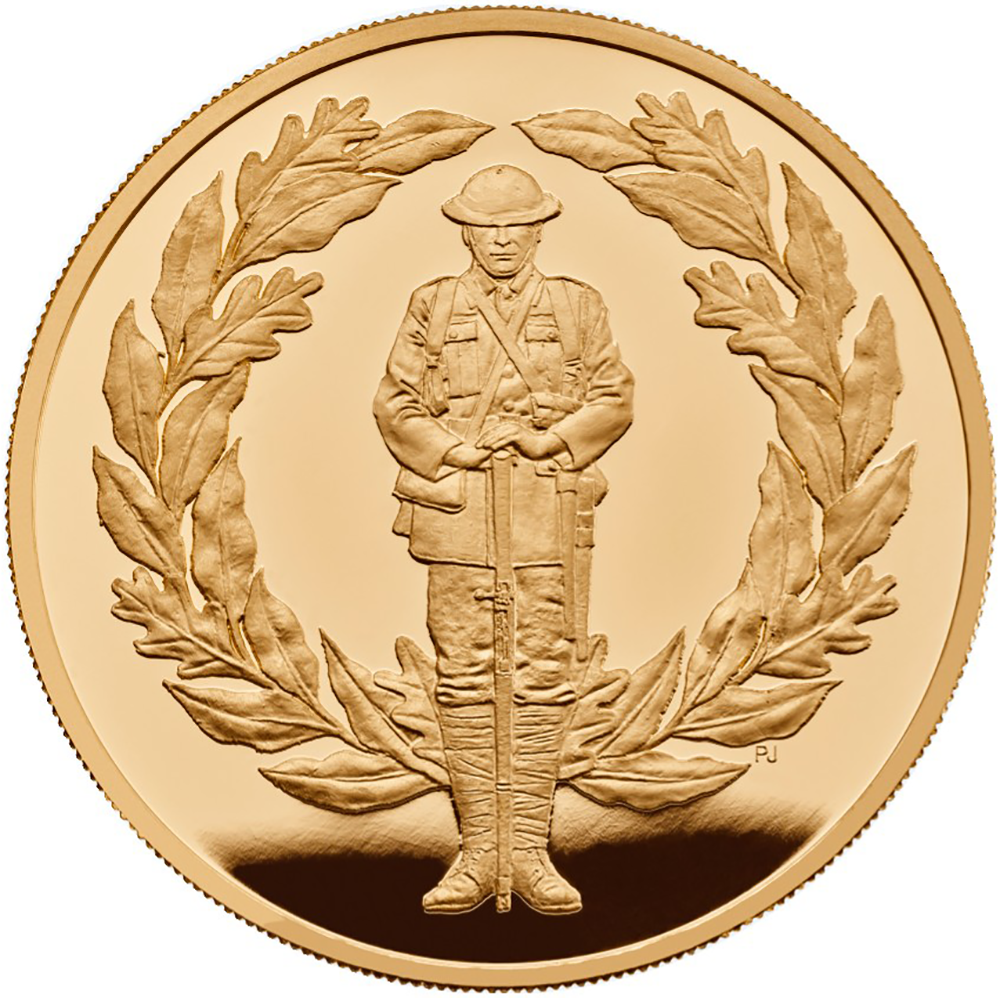 The reverse design of these gold and silver coins was created by renowned sculptor Philip Jackson CVO DL MA FRBS. It depicts a lone figure backed by a wreath of oak and laurel, with no other inscription or device. The figure holds a “rest on arms reverse” stance. A position traditionally taken by the Honour Guard at services of remembrance and for military funerals, this stance conveys the nation’s collective mourning and sense of loss. The inspiration for the design comes from Jackson’s years of study of First World War poetry, in particular that of Rudyard Kipling, who himself was the founding member of the Commonwealth War Graves Commission—a group that changed the way war casualties are commemorated. 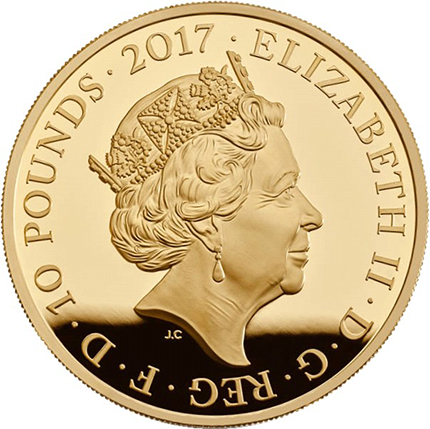 The obverse bears the portrait of Her Majesty Queen Elizabeth II as created by Royal Mint coin designer Jody Clark. The denomination of 10 POUNDS is included in the legend around the Queen’s effigy.

Both coins are encapsulated and presented in custom cases—wooden for the gold coins, matte vinyl for silver examples. They are also accompanied by a booklet created in collaboration with the Imperial War Museums, which explores the wartime events of 1917 and reveals the historic influences that inspired the designer.

The fifth and final coin in this superb series will be issued next year, and dated 2018. Please visit the website of the Royal Mint for additional information on these and other coins on offer.

On the mint’s website, the reverse designer, Philip Jackson, says, “I have read the poetry of the First World War in its many forms for some years and this, together with the war memorials that I have designed and made, helped me to create the intense sadness required for this subject.

“The small but intensely-felt figure in my design is surrounded by a wreath of oak and laurel. Laurel leaves are traditionally presented to victors in the form of a wreath, while the oak symbolises England and ‘home,’ which Rudyard Kipling wrote about so aptly in his poem ‘A Tree Song.’

Of all the trees that grow so fair,
Old England to adorn,
Greater are none beneath the Sun,
Than Oak, and Ash, and Thorn.

—“A Tree Song” by Rudyard Kipling

“The figure is in silent contemplation of comrades lost and battles fought. He stands in a ‘rest on arms reversed’ position, sad but not downtrodden and ready to fight another battle. He is the symbol of our collective memory of the sacrifice and losses of war.”   ❑