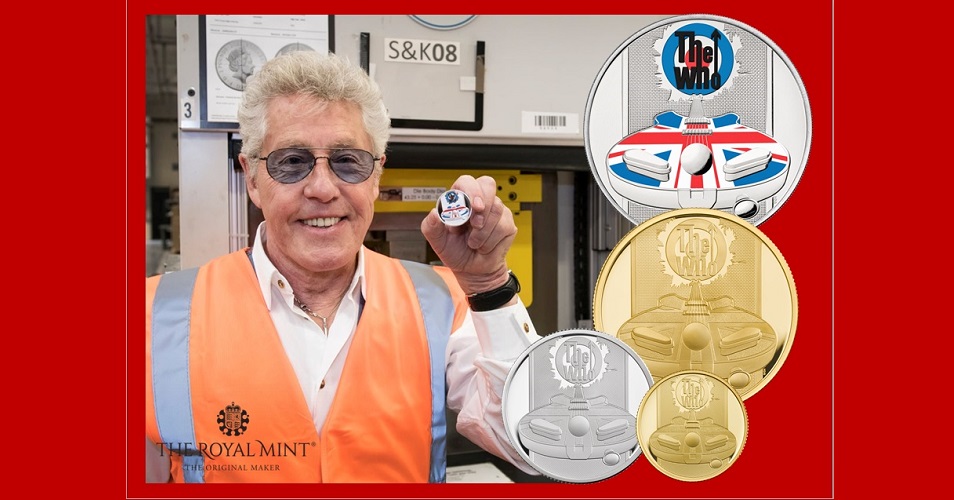 The Royal Mint has released (24th May) their latest collection of gold and silver collector coins which is part of their popular series entitled “British Music Legends.” Following in the footsteps of the three earlier tributes to such legends as Queen, Elton John, and David Bowie, this latest tribute features The Who. With nearly 60 years as an active rock band and millions of fans worldwide, The Who has become one of the most influential rock bands of the 20th century and have sold over 100 million records internationally.

Designed by Henry Gray, the reverse side of the coins are also brought together by the Royal Mint and Bravado, Universal Music Group’s leading merchandise and brand management company. The design features a union jack flag, The Who’s logo and speaker-smashing Rickenbacker guitar. Together, the symbols cleverly form a pinball table, a nod to the single Pinball Wizard and album Tommy, which was one of the band’s most famous creations. With the latest colour printing technology, elements of the coin have been digitally printed to showcase the vibrant red, white, and blue of the band’s emblem.

Using the latest innovative technology and manufacturing techniques, a number of coins will feature a special “shockwave” effect — SwE — radiating from the speaker and elevating the detail of the coin. Designers and craftspeople at the Royal Mint have developed this effect in honour of The Who’s record-breaking loud concert — a record that was held for a decade.

The obverse side includes the fifth definitive effigy of HM Queen Elizabeth II created by Jody Clark and introduced onto all British circulation and commemorative coins since 2015. The denomination from 1 POUND to 1000 POUNDS and the year of release 2021 are included in the legend surrounding the Queen’s likeness. The incused edge inscription included only on the £2 one-ounce silver Proof coins reads PINBALL WIZZARD repeated.

The full range of The Who coins are available as limited-edition precious metal Proof editions and are custom-presented in a variety of options according to their metal, weight, and denomination. Two versions of the Brilliant Uncirculated cupro-nickel edition are available and presented in a colourful folder with images and informative text. A limited-edition Brilliant Uncirculated £5 crown coin is available with a colour reverse design which is exclusive to the Royal Mint. For additional information about these and other coins in the series, please visit the Royal Mint’s website.