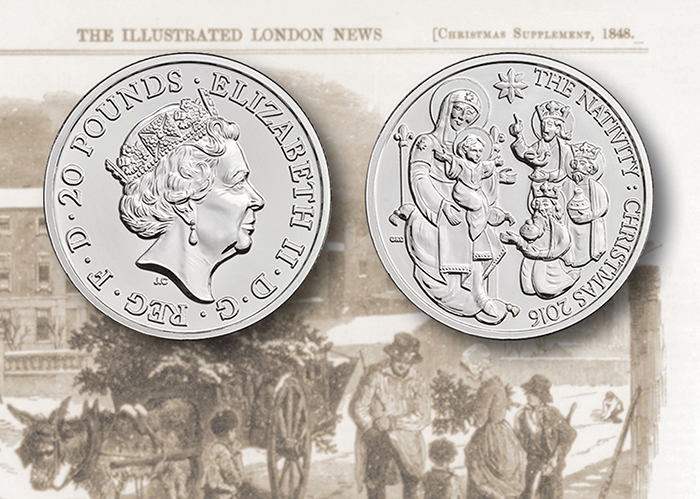 The Royal Mint has officially launched their first-ever Christmas-themed coin, just in time for the holiday gift-giving season. The new coin fits into their range of high-value coins sold at their face value (in the case of this new coin, £20-for-£20). It is minted in a simple, Brilliant Uncirculated quality and presented in a specially designed booklet with space for the recipient to note down their favorite moments of 2016, and wishes for 2017.

The coin is designed by Bishop Gregory Cameron, who also designed the reverse of the last commemorative “round-pound” (released earlier this year). Mr. Cameron is a bishop of the Anglican Church in Wales and a keen artist and coin collector. The reverse includes a depiction of the Virgin Mary with the baby Jesus on her knee. To the right are the three wise men, all holding their offerings to the Christ child. THE NATIVITY: CHRISTMAS 2016 is placed on the right side of the coin.

The obverse includes the fifth effigy of HM Queen Elizabeth II as designed by Royal Mint engraver Jody Clark and used on all British circulation and most commemorative coins since 2015.

Coins have been a part of festive traditions and customs for centuries, like the custom of stirring a sixpence into the Christmas pudding for good luck. On Christmas Eve, children would hang stockings on the mantelpiece hoping to find a coin there the next morning. This tradition is said to have begun with St. Nicholas—the generous saint who crept down the chimney of a poor family to fill the daughters’ stockings with silver coins. (Scroll down for more, including ordering information.)

The design of this first coin is inspired by the 2000-year-old story of the Nativity, in which the Christ child was born in a manger in Bethlehem because there was no room at the inn. Mary and Joseph were on their way to their home village to take part in the census ordered by the Roman governor of Judaea. On the night of the birth of the Savior, three kings (or wise men)—Melchior, a Persian scholar; Caspar, an Indian scholar; and Balthazar, a Babylonian scholar—were guided by the bright star in the night sky and came upon the new mother and child, the baby wrapped in swaddling clothes and lying in a manger. There in the stable they presented the baby with gold, frankincense, and myrrh, and then gathered to adore and honor him, the son of God.

In those days a decree went out from Caesar Augustus that all the world should be registered. This was the first registration when Quirinius was governor of Syria. And all went to be registered, each to his own town. And Joseph also went up from Galilee, from the town of Nazareth, to Judea, to the city of David, which is called Bethlehem, because he was of the house and lineage of David, to be registered with Mary, his betrothed, who was with child.

The coin is the first in what may become an annual issue. It is available from now with immediate dispatch well in time for the holidays; the purchase limit is three coins per household, as the mintage is limited to 30,000 pieces. For more information, please visit the Royal Mint website. International sales dispatched where applicable.