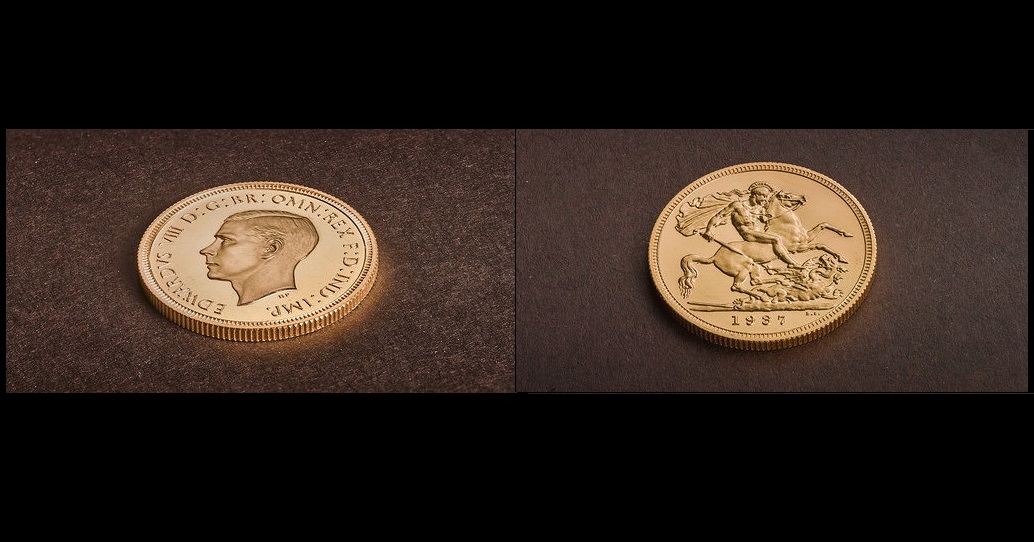 One of the world’s rarest gold coins has changed hands for a record price of 1,000,000 pounds, (or 1,300,000 U.S. dollars) in a sale which has been termed “a once in a lifetime moment” by the coin’s new owner. The sale, brokered by the Royal Mint’s own Collector Services Division, involved a 1937-dated gold sovereign coin depicting King Edward VIII (1894–1972). Minted as a test piece for presentation to King Edward VIII, he succeeded his father King George V in January 1936, and the coins were prepared for his inspection and final approval.

The coin is one of the most coveted in the world and belongs to a small collection of “trial sets” created during the short reign of King Edward VIII. The Edward VIII sovereign, which was involved in this transaction, is one of just two examples thought to exist in private ownership; the remaining four examples reside in museums and institutions including The Royal Mint Experience — visitor’s centre in Pontyclun, Wales, where it is on permanent display to the public.

For decades, these test coins were hidden from public view with a few examples eventually making their way to exhibition and display. This gold sovereign coin, which changed hands, was previously sold for a then-record price of £516,000 in 2014 to an American collector. The coin’s new owner, a sovereign collector who wishes to remain anonymous, commented that since this opportunity came along, they felt the chance to own this coin could not be turned down and adding it was a once in a lifetime opportunity. The Collector Services Division essentially acted as the broker for the sale, for an additional fee of the price. Royal Mint experts determined that the coin could be available for purchase and contacted the collector of sovereigns, finalising the deal.

For additional information about the Royal Mint Collector Department, please visit their website. 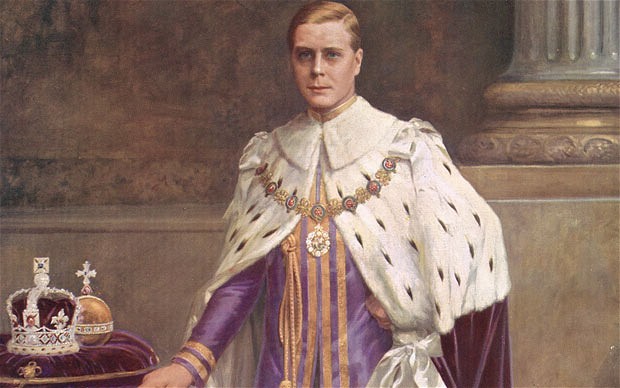 The Royal Coins that Never Were — King Edward VIII, January-December 1936

Edward VIII, eldest son of King George V and heir to the British throne since 1911, was set to attend his coronation in May 1937. However, there was one thing impeding this popular and handsome monarch remaining on the throne — his companion. This companion was an American divorcee by the name of Wallis Warfield Simpson, and the two had been introduced to each other by a mutual friend three years before his accession. Soon after, the pair were inseparable, despite Mrs. Simpson having a husband whom she had married in 1927.

As the King made it clear to his government at the time that he intended to marry Mrs. Simpson and remain King, not only of Great Britain but of his many other realms of the day, the would-be marriage caused a constitutional crisis. Ultimately, he was adamantly advised by his ministers that he would have to either give up plans to marry Mrs. Simpson or the throne. 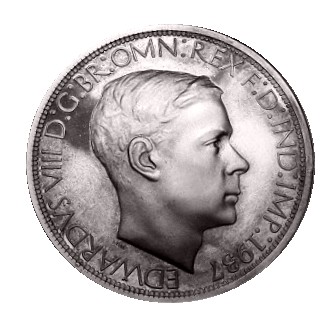 Image of the proposed effigy of King Edward VIII shown on a replica crown coin that was rejected.

Before the thought of an abdication, the Royal Mint had worked closely with King Edward VIII to produce coins which he would need to approve in due course. One of the more interesting aspects of his proposed coinage was the fact that his profile was to break with tradition. Since the restoration of the Monarch in 1660 and the reign of King Charles II, successive effigies changed the direction they faced from their predecessors. In this regard, a coin portrait was prepared by eminent engraver and artist Thomas Humphrey Paget (1893–1974), who, according to tradition, portrayed the new King facing right. However, the problem with this concept was that the King, who pointed out his hair was parted on the left side, his part of his hair would not be visible.

As a consequence, new effigies were prepared, and it was this work which was approved. Test pieces of the denominations in use at the time of the King’s accession and dated 1937 were prepared and presented to King Edward VIII for his approval. The coinage of Edward VIII had been scheduled for full production in January 1937, well in time for his coronation. which was to be held on the 12th May.

The newspapers had found out that Wallis Simpson had sought a divorce from her present husband Ernest, and before long, the story had taken on a life of its own. A constitutional crisis ensued, and faced with unsurmountable objection from many of his subjects and foreign governments, King Edward VIII signed his instrument of abdication on the 11th December 1936, having reigned a total of just 326 days. His reign is remembered as one of the shortest tenures of any British monarch in modern times, but the coins are testament to a chapter within the British monarchy which many had wanted to put to rest — none more so than the Prince who succeeded Edward VIII, his younger brother, the Duke of York, who is remembered as King George VI, father of HM Queen Elizabeth II. Edward, who was given the title HRH the Duke of Windsor, requested a set of coins from his brother, the new King, but was refused. He went on to marry Mrs. Simpson, who was known as the Duchess of Windsor — but without a royal status on the 3rd June 1937. No immediate members of his family attended their wedding, which was officiated in France.

It is noteworthy to mention that in keeping to tradition, when the coins of King George VI were prepared, he was also portrayed facing left, in recognition that Edward VIII should have faced to the right — had he not broken the sequence.

Edward and Wallis were known worldwide as part of the international jet-set, living in France and New York. He returned on rare occasion to the United Kingdom, notably for the funeral of his brother King George VI in February 1952, and for significant family anniversaries. He died on the 28th May 1972 and was buried in the Royal Mausoleum in Frogmore Windsor. Wallis survived her husband by 14 years and died in April 1986, and she was laid to rest beside her husband, the former King.