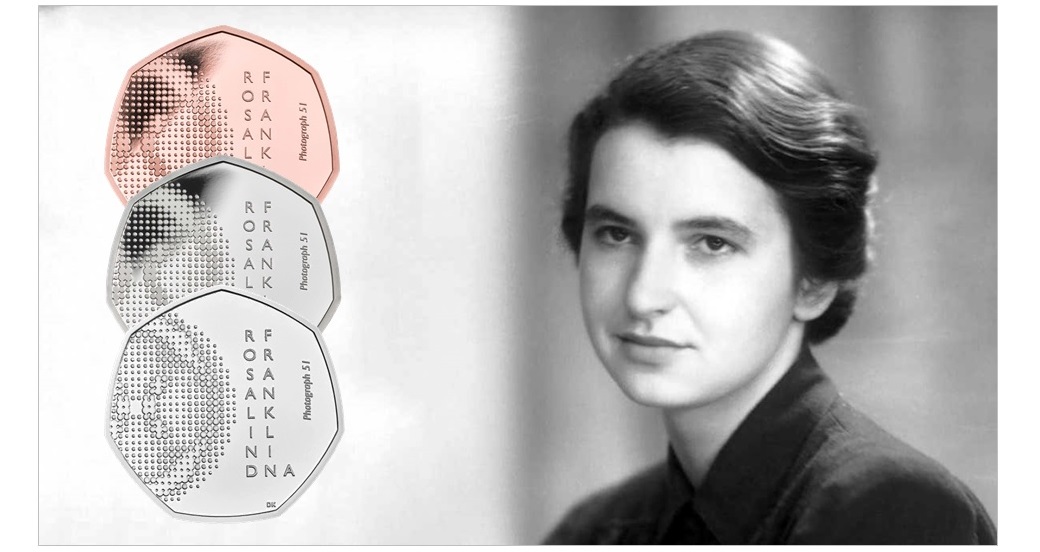 The Royal Mint has released (20th July) new 50-pence commemorative coins which honour one of the country’s most eminent scientists of the 20th century. The new coin, the second in the Royal Mint’s series entitled “Innovation in Science,” is issued on what would have been the 100th birthday of Rosalind Franklin. The coin is also produced in collaboration with the King’s College, London, where Franklin’s DNA research took place. Rosalind Franklin’s brilliant mind and tireless dedication enabled breakthroughs in multiple fields and was instrumental in enabling one of the most significant discoveries of the 20th century. Best known today for her research into DNA, Franklin was a world authority on the chemical structure of viruses, as well as coal and graphite.

Born in Notting Hill, London, on the 25th July 1920, Rosalind Elsie Franklin was the elder daughter and the second child of Ellis Arthur Franklin, a merchant banker, and Muriel Frances Waley. Her middle name, “Elsie,” was in memory of her Uncle Hugh Franklin’s first wife, who died in the 1918 flu pandemic. She attended and excelled at St. Paul’s Girls’ School and was determined from a young age to become a scientist. From early childhood, Franklin showed exceptional scholastic abilities. At the age of six, she joined her brother Roland at a private day school in West London. At that time, she was described as “alarmingly clever — she spends all her time doing arithmetic for pleasure, and invariably gets her sums right.” In 1938, Franklin fulfilled her childhood ambition, taking up a place at Newnham College, Cambridge, to study natural sciences, specialising in chemistry. In 1947 Franklin started a new job at the Laboratoire Central des Services Chimiques de L’État in Paris. Continuing her research into coal and graphite, Franklin became an expert in x-ray crystallography. A few years later Franklin joined the Medical Research Council Biophysics Research Unit at King’s College London, applying these techniques to DNA. It was in May 1952 that Franklin and Raymond Gosling successfully produced Photograph 51 by shining an x-ray beam for more than 60 hours at right angles onto a sample of DNA fibres; from this image, a three-dimensional model of DNA could be determined. 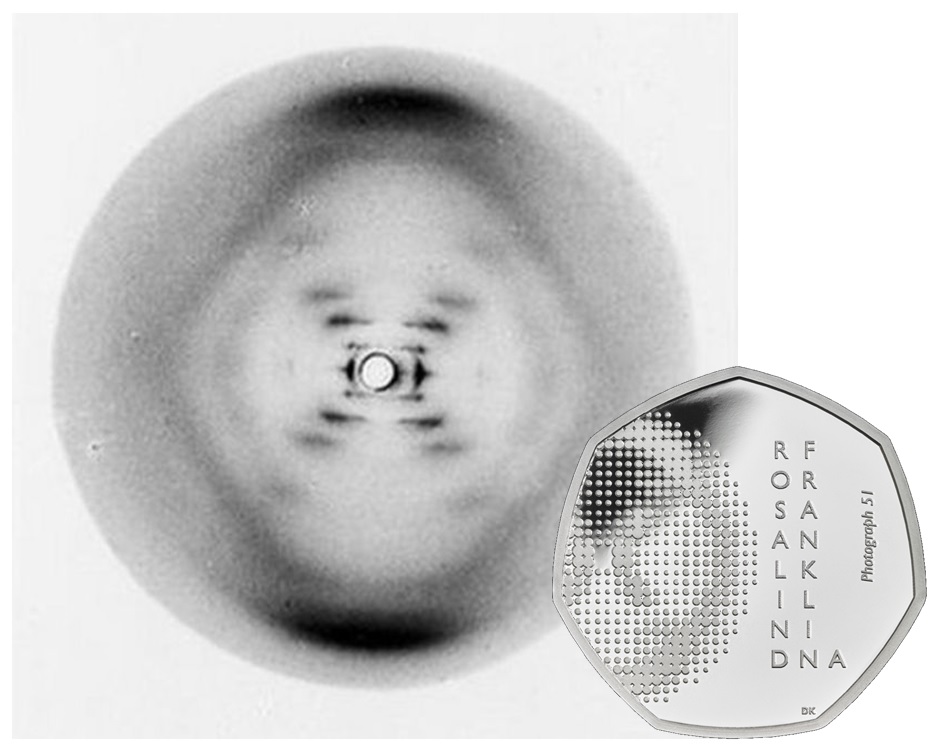 In January 1953, while on a visit to King’s College, James Watson (born 1928), an American molecular biologist, was shown Photograph 51 by Professor Maurice Wilkins, a colleague of Franklin, though without her knowledge. It spurred him and Francis Crick to build a model, something Rosalind had always resisted, believing that it should be possible to calculate the structure from the diffraction patterns. Watson and Crick’s double-helix model, with its specific pairing of the bases, immediately suggested how DNA could be copied and thus a molecular mechanism for heredity. Photograph 51 and other data from Rosalind’s work during her time at King’s College London were vital in building the structure but were never properly acknowledged. Rosalind left King’s College in 1953 and began work on viruses, again using x-ray crystallography, at Birkbeck College London. She quickly established the first detailed structure for any virus, Tobacco Mosaic Virus, showing how the RNA was surrounded by a helically arranged “coat” of protein. Together, with Aaron Klug, she moved on to other viruses, and at the time of her death in 1958, they were working on the poliovirus. In these few years, Rosalind had established a world-leading group. After her death, her work was taken on by Klug and others.

Rosalind Franklin’s brilliant mind and tireless dedication enabled breakthroughs in multiple fields. In an unexpected turn of events in mid-1956, while on a work-related trip to the United States, Franklin first began to suspect a health problem. When Franklin returned to London, she consulted her Physician, who marked her case as “URGENT.” An operation on the 4th September of the same year revealed two tumours in her abdomen and a diagnosis of ovarian cancer. While undergoing cancer treatment, Franklin continued to work, she and her colleagues continuing to produce results, publishing seven papers in 1956 and six more in 1957. She fell ill again on the 30th March and tragically died on the 16th April 1958 in Chelsea, London, at the age of just 37. She was survived by her immediate family, including her two parents and four siblings, and was laid to rest at the Willesden United Synagogue Cemetery. Her early demise denied her the accolades and recognition that would surely have come during her lifetime.

Aaron Klug, who collaborated with Franklin at Birkbeck, made a point of acknowledging the work of his late colleague in his acceptance speech for the Nobel Prize in Chemistry in 1982 for his work on viruses. He acknowledged that Franklin might well have shared the platform with him, had her life not been tragically cut short.

More recently, Rosalind Franklin was a candidate for inclusion on the Bank of England’s series G £50 banknote which is scheduled for release in 2021. Mathematician and computer scientist, Alan Turing (1912–1954), was chosen by public consultation from the shortlist of 12 which included Franklin. 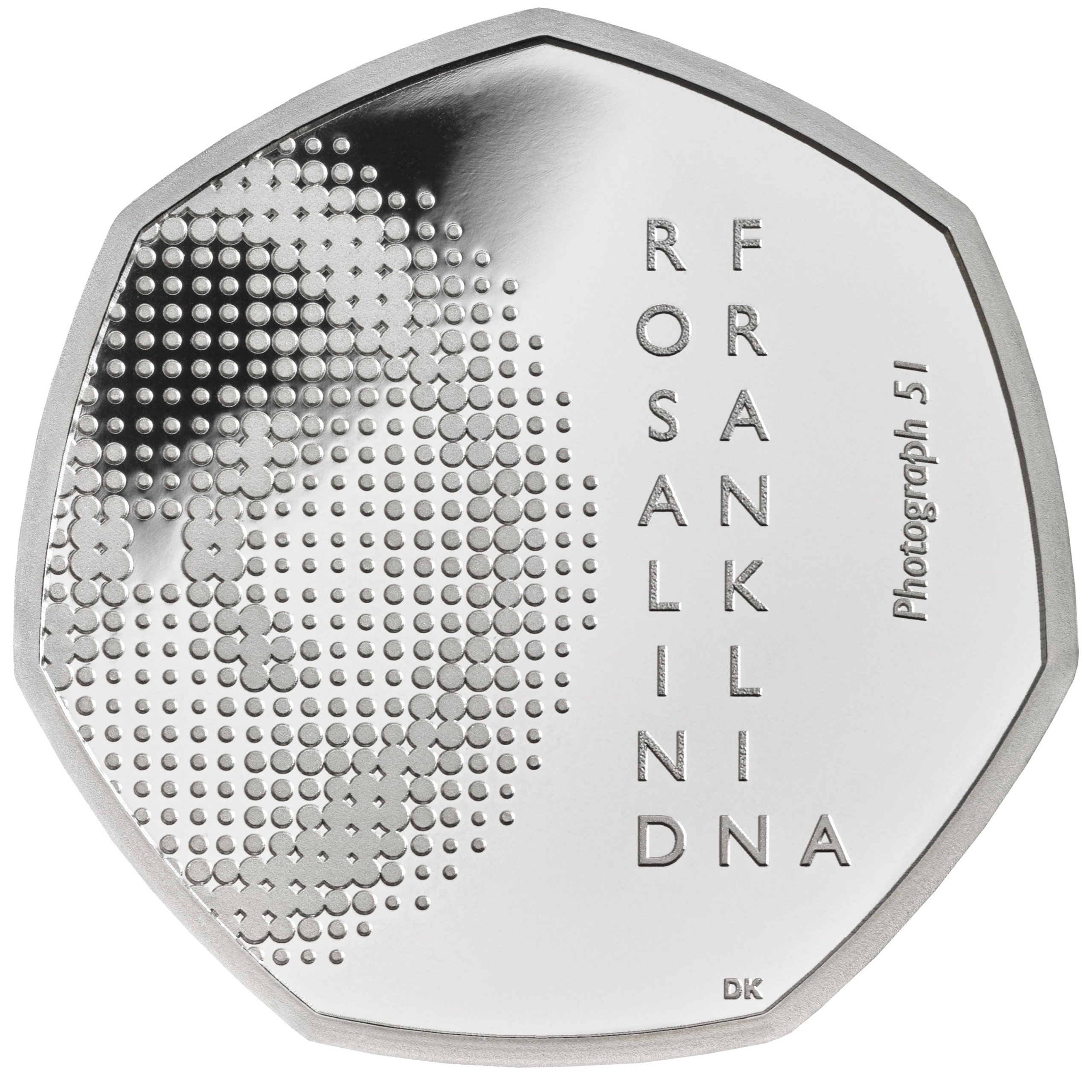 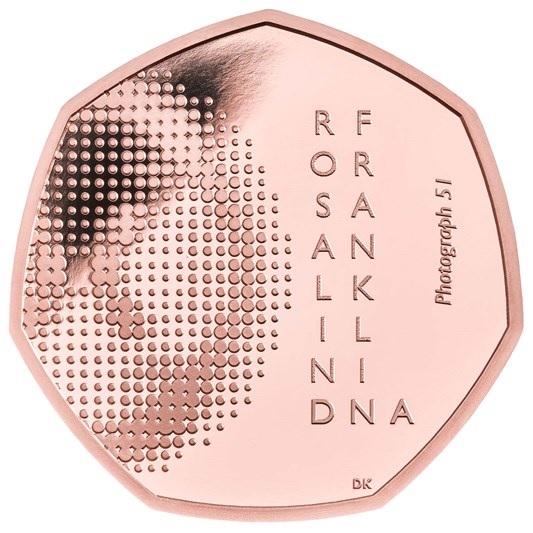 The coin is designed by Royal Mint graphic designer David Knapton, whose reverse side depiction is inspired by the historical inaccuracy and failure to credit Rosalind Franklin’s role in determining the structure of DNA. The motif prominently features the printing techniques of the era and Franklin’s name vertically arranged, along with the initials DNA, in the design along with Photograph 51, the groundbreaking image she captured which become known as “the building blocks of life.” 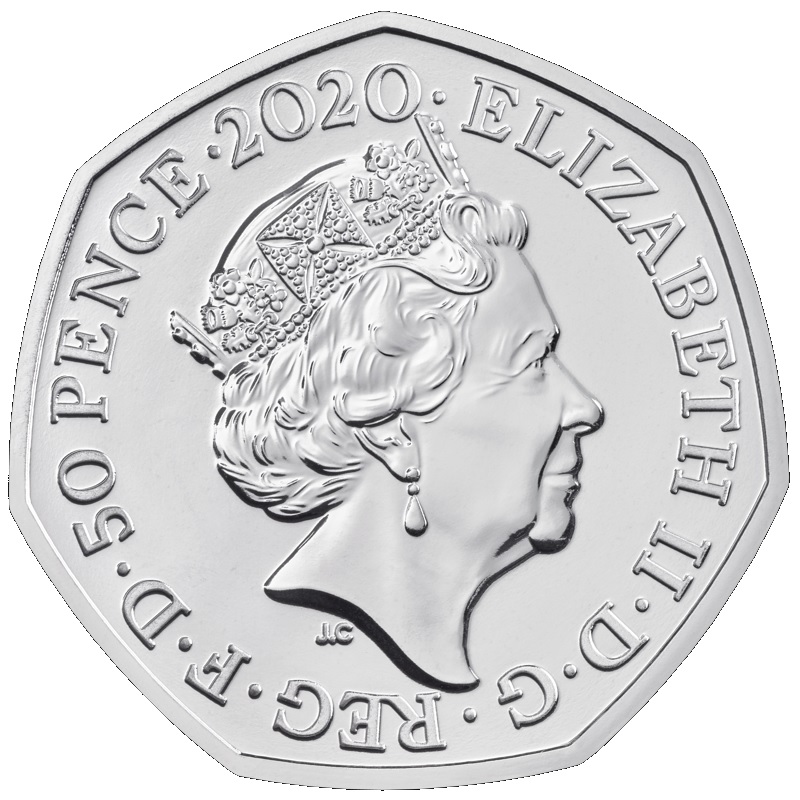 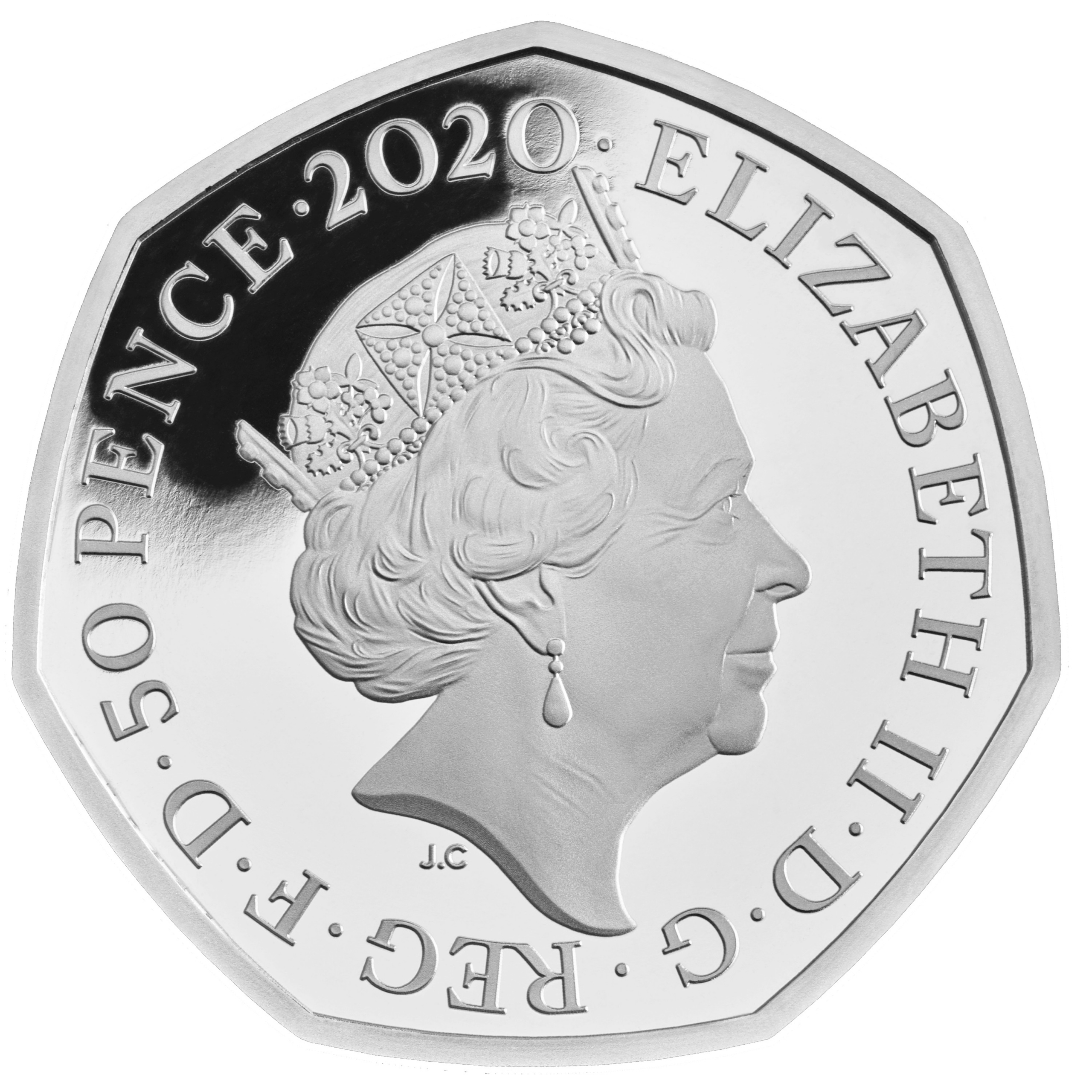 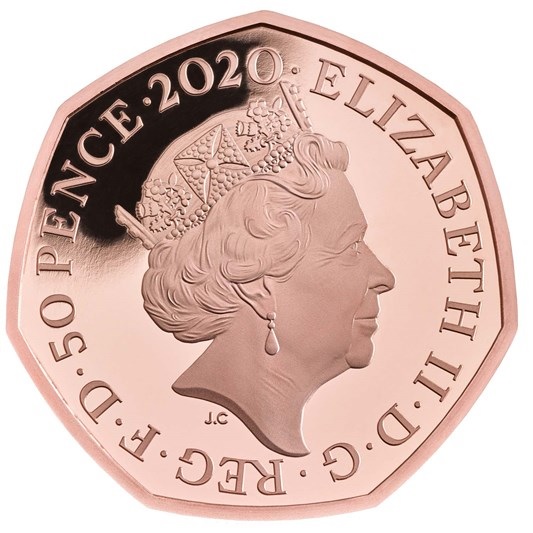 The obverse side depicts the fifth effigy of HM Queen Elizabeth II created by Royal Mint engraver Jody Clark and introduced in 2015. The denomination of 50 PENCE is included in the legend placed around the Queen’s likeness. 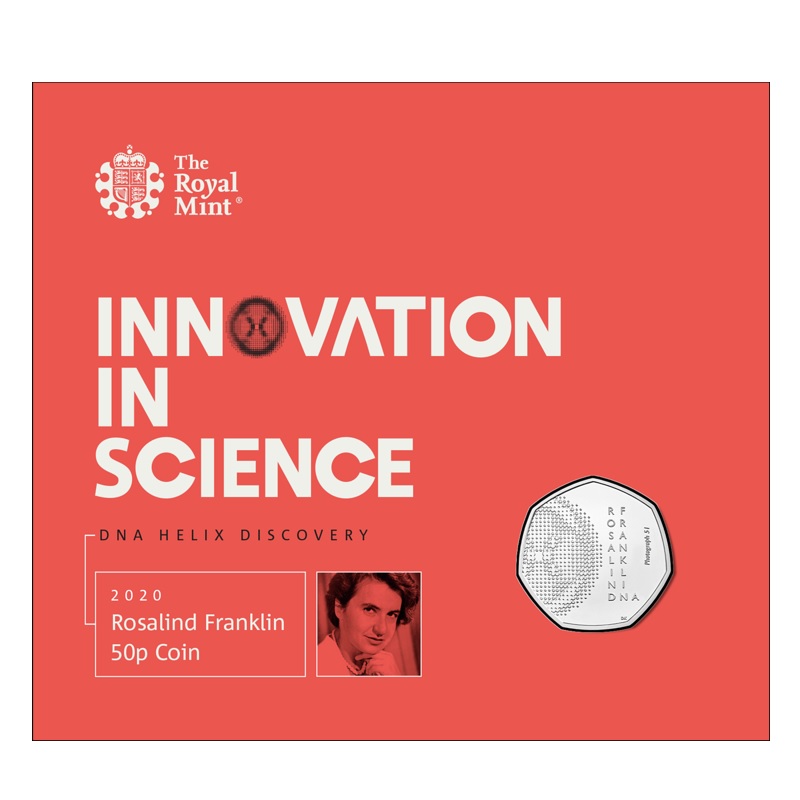 The Brilliant Uncirculated quality-strike coin is presented in a colourful folder which includes images and background information about Rosalind Franklin’s work and the discoveries she is now credited with having been part of during her career. 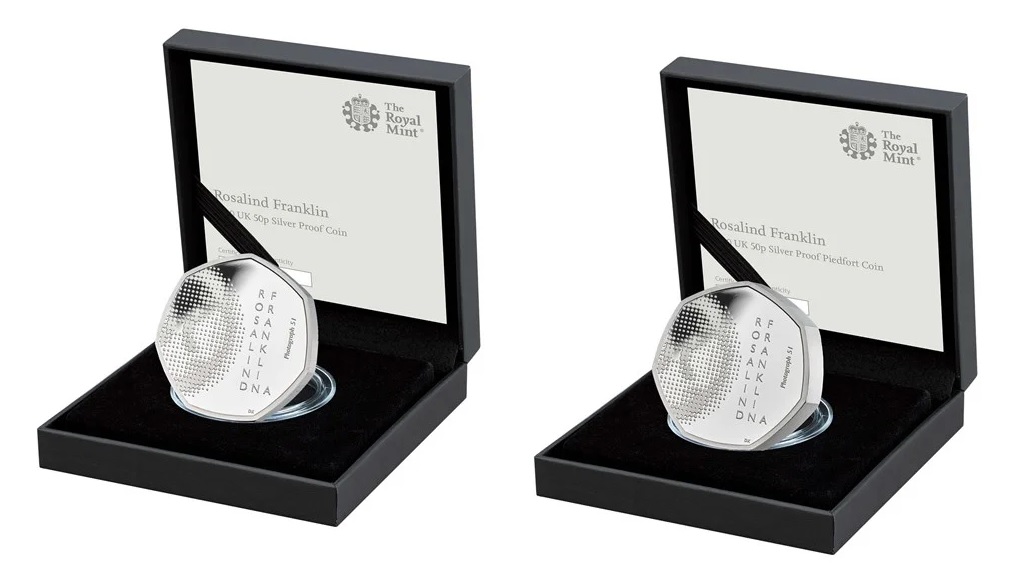 Both sterling silver versions are encapsulated and presented in a black-branded custom case and are accompanied by a numbered certificate of authenticity. 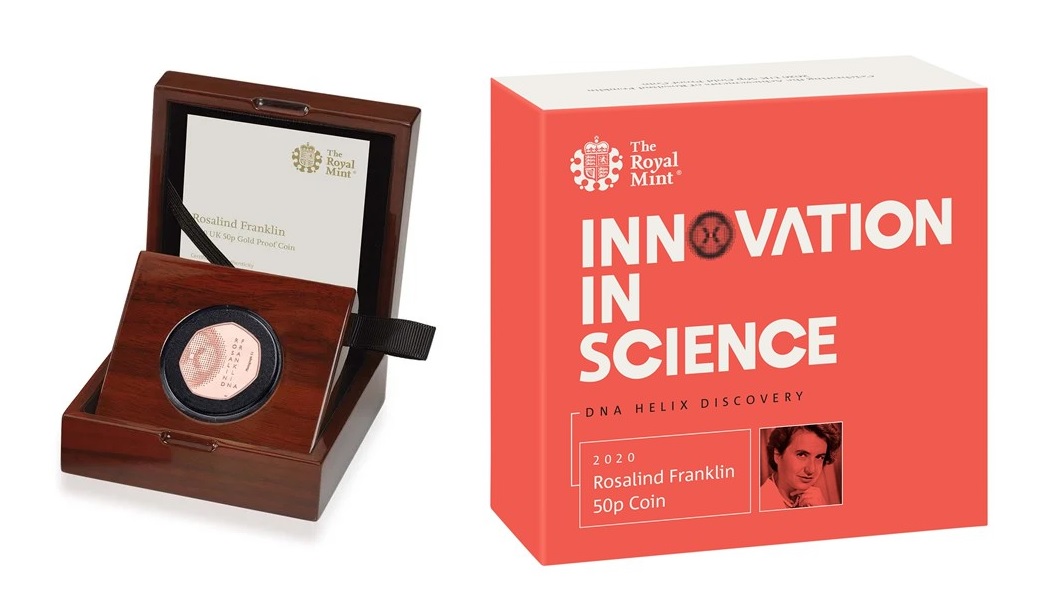 The gold examples are presented in custom polished wood cases and are also accompanied by a numbered certificate of authenticity. For more information about this series or other coins available from the Royal Mint, please visit their website.

United Kingdom: Peter Rabbit hops onto new 50-pence coins in time for Easter — and for the very last time