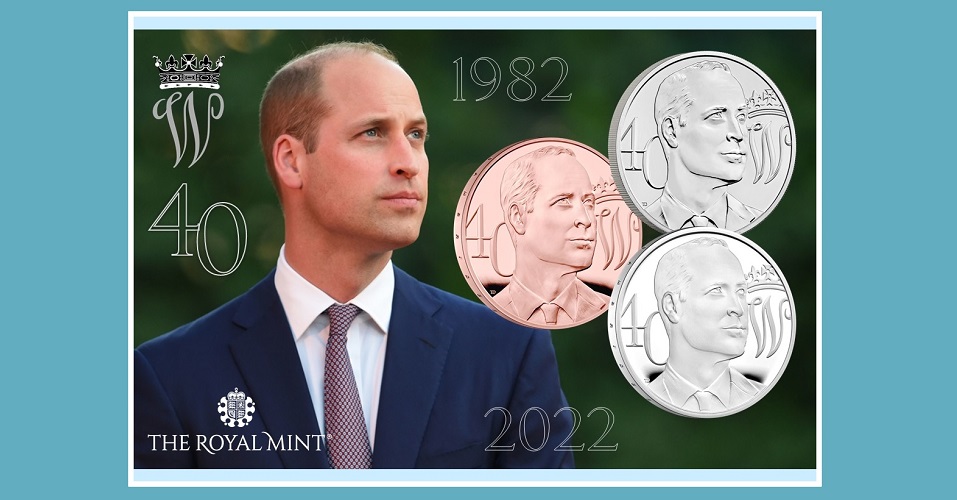 The Royal Mint has released new commemorative crown coins marking the 40th birthday of one of the royal family’s most beloved members, His Royal Highness Prince William, The Duke of Cambridge. Since attaining his majority, he has evolved from a popular young prince to a senior member of the royal family. Prince William is a devoted husband to Her Royal Highness Catherine, The Duchess of Cambridge, and a loving father to their three young children. Well thought of by his peers and the British public, His Royal Highness endeavours to make an impact on causes close to his heart, such as protecting the environment and bringing a greater voice to those suffering from mental health issues.

The much-anticipated arrival of the first child of Their Royal Highnesses the Prince and Princess of Wales, William Philip Arthur Louis was born on the 21st June 1982 to a 41 gun salute by the King’s Troop Royal Horse Artillery and the Honourable Artillery Company. The baby was named William, Philip for his Grandfather, Arthur as this is a name for English kings in folklore, and Louis after Louis Mountbatten, a favourite granduncle of his father. He was the first baby born to a Prince of Wales since 1905 and from his birth, he has been second in line to the succession of the British throne. In 1992, his parents announced their separation and in 1996, their divorce was made final. Prince William and his brother Prince Henry experienced great tragedy in their young lives when their beloved mother Princess Diana was killed in an automobile accident in 1997.

This is the second time Prince William has been featured on a commemorative coin issued in the United Kingdom, the first being those released for his wedding in 2011. Highlighting a reverse design by Thomas T. Docherty, a product designer and engraver at the Royal Mint, the reverse features a three-quarter facing image of the Prince looking to the right and is based on a photograph that is included on his website. To his right are the conjoined numbers 4 and 0 and to his left is his crowned monogram W.

The obverse of each coin in the range features the fifth definitive effigy of Her Majesty Queen Elizabeth II, designed by Jody Clark and in use on all British commemorative and circulation type coins since 2015. The denomination and year of issue also appear on the obverse as part of the legend surrounding the Queen’s likeness. The incused lettering edge inscription on the precious metal crowns reads HRH THE DUKE OF CAMBRIDGE

The cupro-nickel crown is sealed in a colourful folder containing images and informative text pertaining to the life of the Duke of Cambridge. Each of the gold and silver Proof and silver Piedfort coins are encapsulated and presented in a selection of hardwood high-gloss cases and/or matte black cases accompanied by numbered certificates of authenticity. For additional information about this collector series, please visit the Royal Mint’s website.