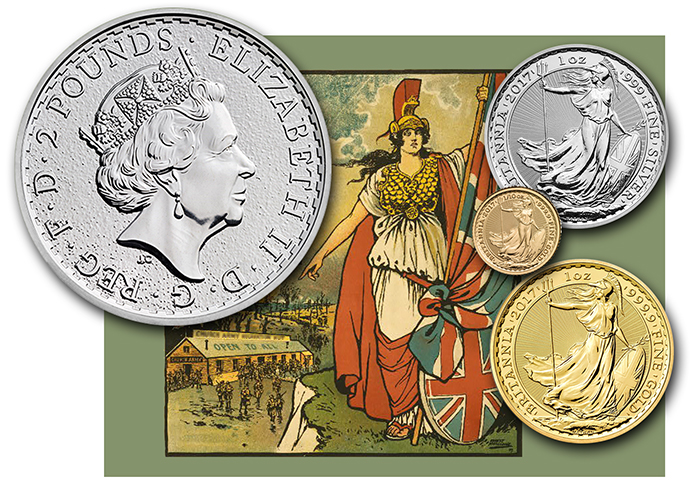 Britannia, now woven into Britain’s heritage, first appeared on British coinage in 1672 during the reign of Charles II, and her presence on circulating coins was consistent until 2008. She has since been reintroduced to our circulating coinage as the reverse design on the definitive £2 coin introduced last year.

It was in 1987 when the United Kingdom’s first-ever purpose-struck gold bullion coins were minted, ostensibly as an alternative to the Krugerrand, the Maple Leaf, the Gold Eagle, and, to a lesser extent, the Gold Panda. The coin was produced in 22 carat gold, or .9167 fine, as opposed to a pure .9999 fineness. This was changed in 2013, when the fineness was increased to pure gold in an effort to compete with other bullion coins minted in this preferred pureness. Additionally, the new Britannia line of bullion coins were also available in fractional sizes of 1/2-, 1/4-, and 1/10-ounce sizes. The coins bore face values of £100 for the 1-ounce size, £50 for the 1/2-ounce, £25 for the 1/4-ounce, and £10 for the 1/10-ounce. In 2013, a 5-ounce bullion coin with a face value of £500 and a 1/20-ounce piece with a face value of £5 were added to the product range.


The reverse design included an impressive depiction of a standing Britannia wearing a Corinthian-style helmet, trident in her right hand, with her left hand carrying an olive branch and resting on a shield that included the “Union Jack.” The obverse carried the elegant effigy of HM Queen Elizabeth II as created by Raphael Maklouf. This depiction, which was introduced in 1985, was the third effigy of the Queen used on British and Commonwealth coins since her accession in 1952. 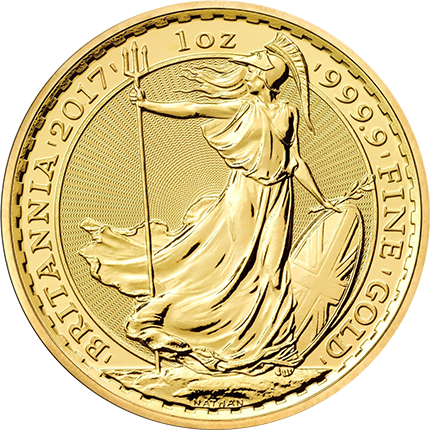 Reverse of the 2017 one-ounce gold Britannia.

On the occasion of the 10th anniversary of this extraordinary and popular coin product in 1997, a silver 1-ounce coin with a face value of £2 joined the family of Britannias with great success.  The reverse design, created especially for the new silver coins, depicted a standing Britannia driving a team of horses behind a chariot—a dramatic and evocative image of the female personification of the nation. Struck in Proof quality only and in the traditional “Britannia silver” fineness of .958, the 1-ounce coin was also joined by three fractional pieces. From 1998, the silver issues were struck in both Proof and Uncirculated quality for both collectors and investors and with a new portrait of Queen Elizabeth II created by sculptor Ian Rank-Broadley—this, the fourth image of the Queen to appear on British coinage, would remain in use until 2015. The Royal Mint also took the decision from 1998 to change the reverse designs of the silver coins, introducing imaginative and very artistic impressions of Britannia. In 2013, the fineness of the silver Britannia was also increased to .999, and the diameter was slightly decreased, from 40 to 38.6 millimeters. 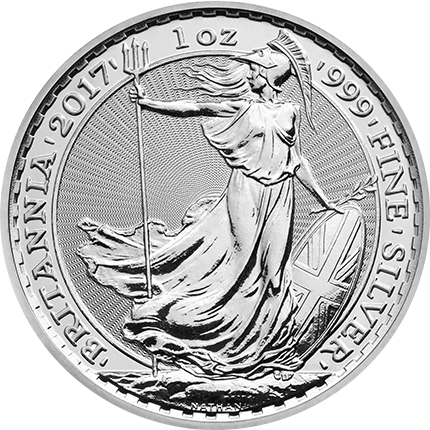 Reverse of the 2017 one-ounce silver Britannia.

For 2017, to mark the anniversary of this iconic design, the original figure of Britannia is framed with an additional embellishment—a radial sunburst composed of intricately engraved lines of relief on both gold and silver pieces of all weights. The obverse of the coin features the fifth definitive portrait of HM Queen Elizabeth II, by Royal Mint coin designer Jody Clark.

The weight and purity of the Britannia gold and silver coins is independently verified annually at the centuries-old Trial of the Pyx. Investors may purchase the coins from the Royal Mint in Llantrisant, Wales. For more information on these and other coins offered by the Royal Mint, please visit their website or contact your preferred bullion distributor.