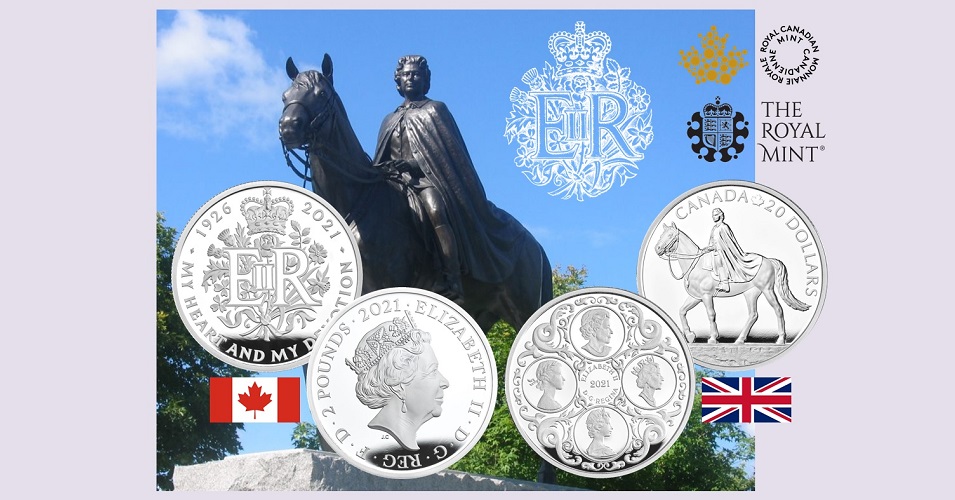 A joint release between the Royal Mint and the Royal Canadian Mint has been launched on the 6th April, with the two mints offering each a silver Proof-quality crown coin in celebration of the 95th birthday of HM Queen Elizabeth II. As the Head of State of Great Britain, the Queen is also Canada’s Head of State since the 6th February 1952. During her long and event-filled life, Her Majesty has achieved many world records and “firsts,” in terms of longevity.

The extraordinary life of the world’s most celebrated woman began on the 21st April 1926 when Princess Elizabeth Alexandra Mary of York was born in the London home of her maternal grandparents to Their Royal Highness’ the Duke and Duchess of York. She was the first grandchild of King George V and upon her birth, was third in the line of succession behind her uncle Edward Albert, the Prince of Wales, and Albert Frederick, her father. However, it wasn’t expected that the little Princess would ever succeed to the British throne as her uncle, the yet-unmarried heir apparent, was expected to provide for the succession in due course. However, he had fallen in love with a twice-divorced American woman and ultimately had to choose between duty and personal fulfilment. King Edward VIII abdicated in December 1936, just 10 months after the death of his father King George V. The royal crisis saw the accession of Edward VIII’s younger brother, Princess Elizabeth’s father, who became King George VI. With this accession, it meant the 10-year-old princess became Heiress presumptive. Elizabeth’s fate was that she should become Queen quite early in her life with the unexpected death of her beloved father on the 6th February 1952, after less than 16 years as King. The young princess was on the 8th February 1952 formally proclaimed Queen at a ceremony in St. James’s Palace, London. She was escorted to her glorious coronation by her dashing husband Prince Philip, the Duke of Edinburgh, to Westminster Abbey on the 2nd June 1953. The centuries-old and solemn ceremony was televised and seen by a quarter of the world’s population.

As Queen of Canada, she has visited the country on more than 22 occasions, including the opening of the St. Lawrence Seaway in 1959, to officiate at Canada’s Centennial and Expo 67 in 1967 and the Montreal Olympics in 1976. More importantly, the Queen effectively repatriated Canada’s Constitution in 1982 when it was moved from Westminster to Ottawa. Queen Elizabeth II’s last visit was in 2010, when she and the Duke of Edinburgh celebrated Canada Day on Parliament Hill.

The two-coin set includes one fine silver one-ounce Proof-quality piece crafted by both Mints and in celebration of the Queen’s sovereignty over Canada and the United Kingdom. The coin from the Royal Mint features a floral design by Timothy Noad on the reverse whilst the obverse bears the fifth definitive coinage portrait of the Queen by Jody Clark. Canada’s tribute to the shared sovereign’s personal milestone consists of a pure silver coin featuring a detailed engraving of the first-ever equine statue of Queen Elizabeth, sculpted and displayed in Canada’s national capital. 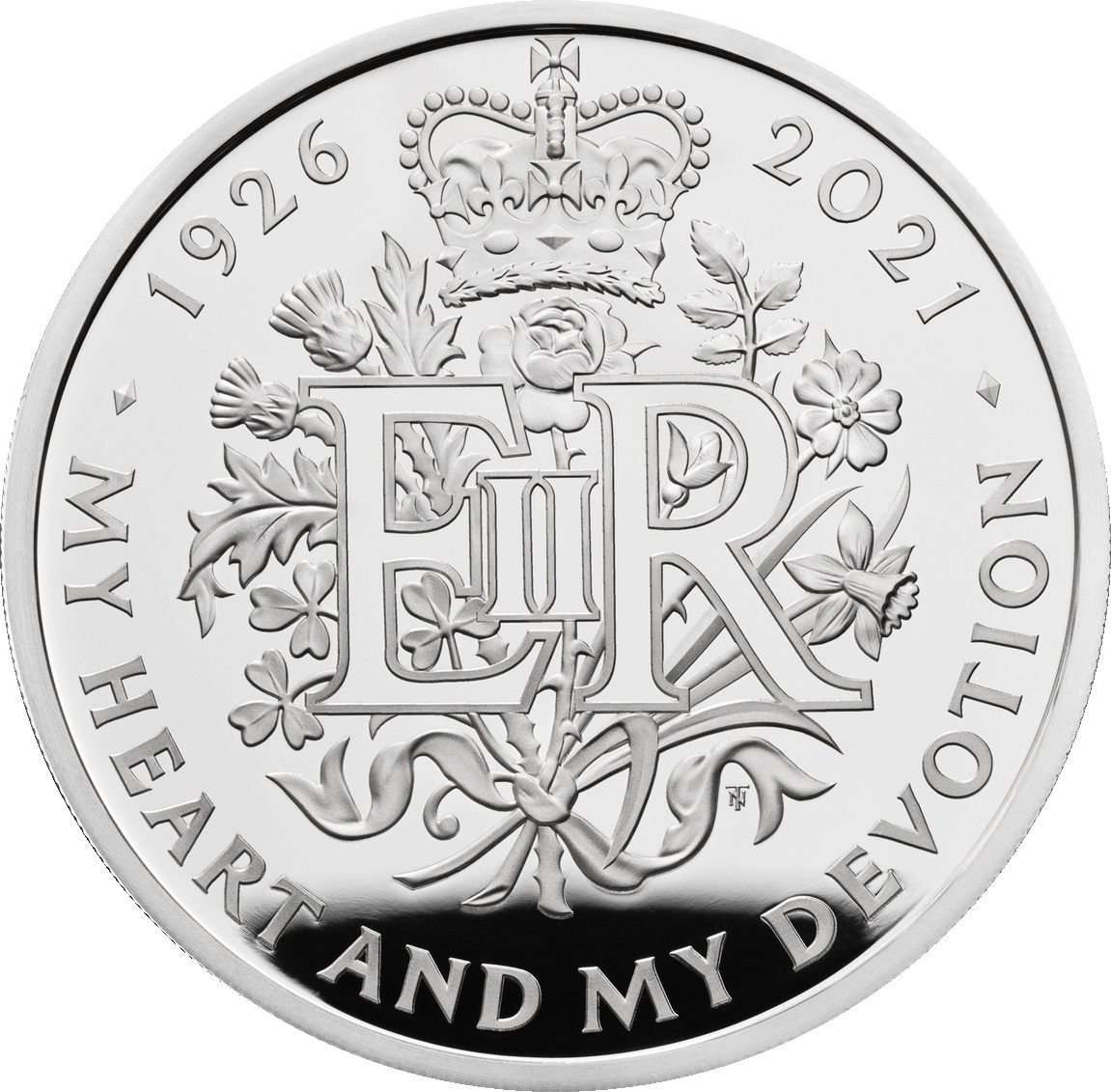 The Royal Mint recruited British heraldic artist Timothy Noad to design its pure silver coin. Its reverse, dated 1926 and 2021, includes the Royal Cypher of E II R, and a floral emblem of the nations of the United Kingdom that include elements of roses (England), thistles (Scotland), shamrocks (Northern Ireland), and daffodils (Wales). The inscription MY HEART AND MY DEVOTION is shown below the primary design. The reference was part of the commentary given by the Queen during her first televised Christmas message in 1957. 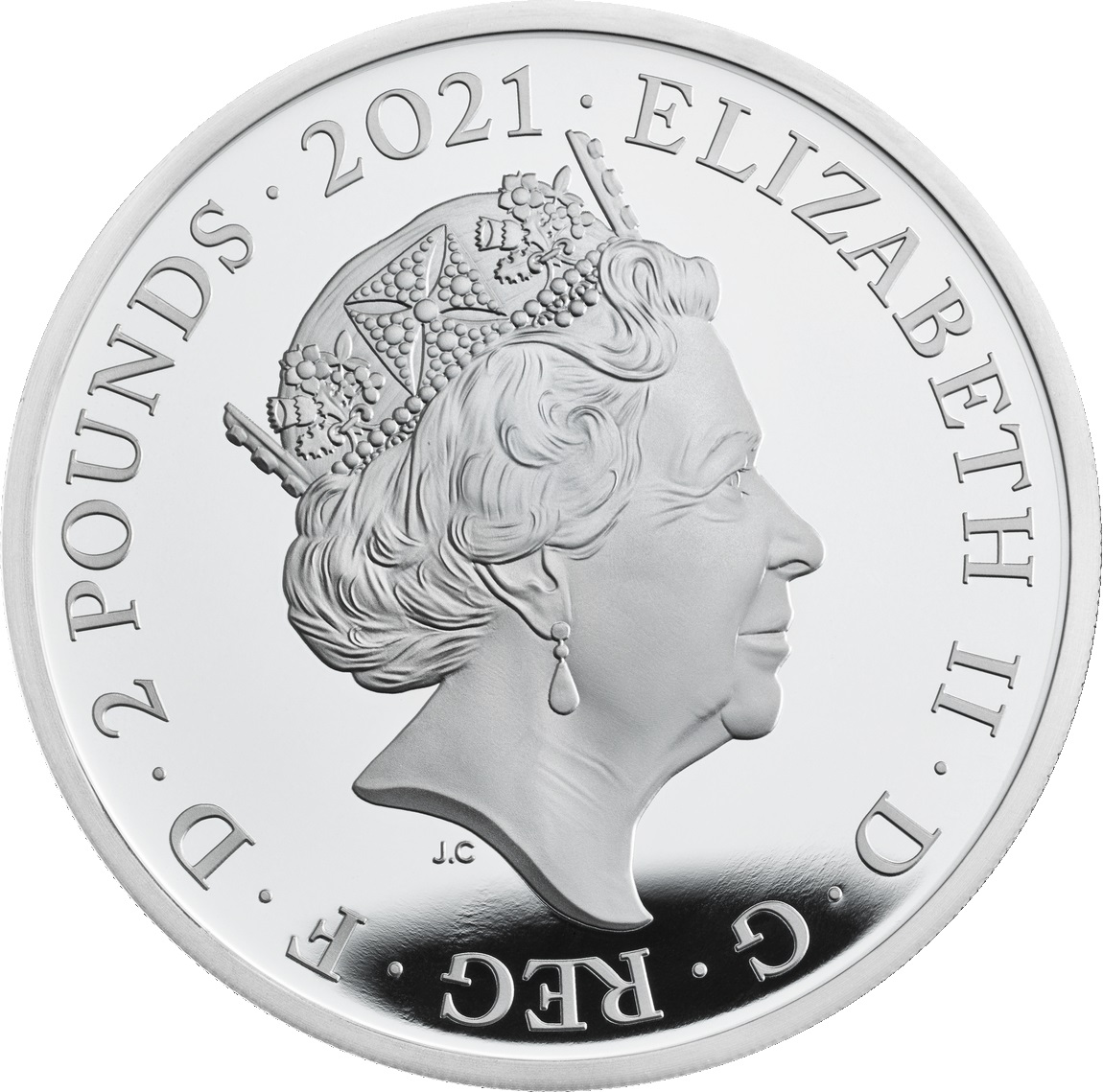 The obverse features the fifth effigy of Her Majesty the Queen by Royal Mint designer Jody Clark. This portrait was launched in March 2015 and coincided with Queen Elizabeth becoming Britain’s longest-serving monarch in September the same year. 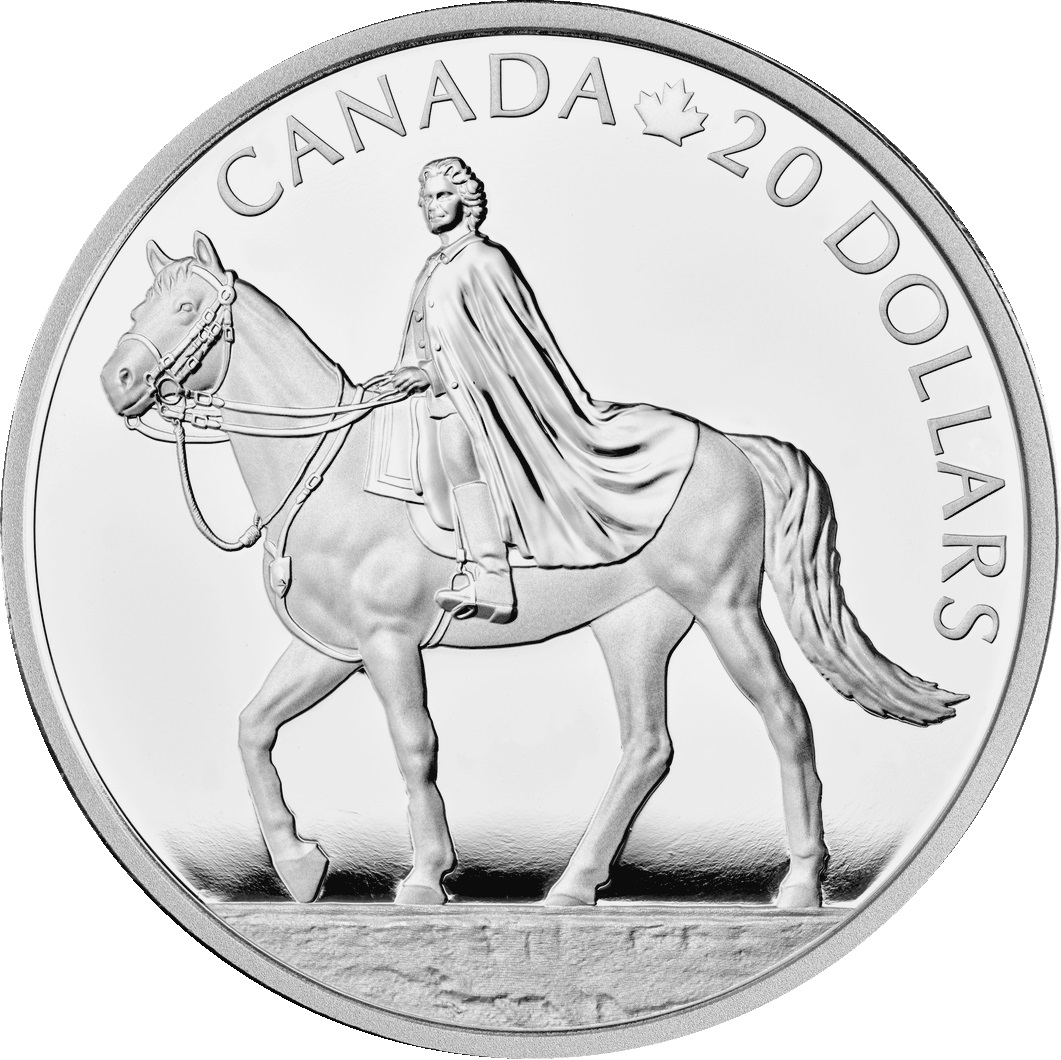 A Royal Celebration features elegant imagery of Her Majesty on both sides of the one-ounce pure silver coin. The reverse displays a reproduction of the Queen Elizabeth II Equestrian Monument, sculpted in 1992 by Canadian artist Jack Harman and unveiled by Her Majesty on Parliament Hill in Ottawa. 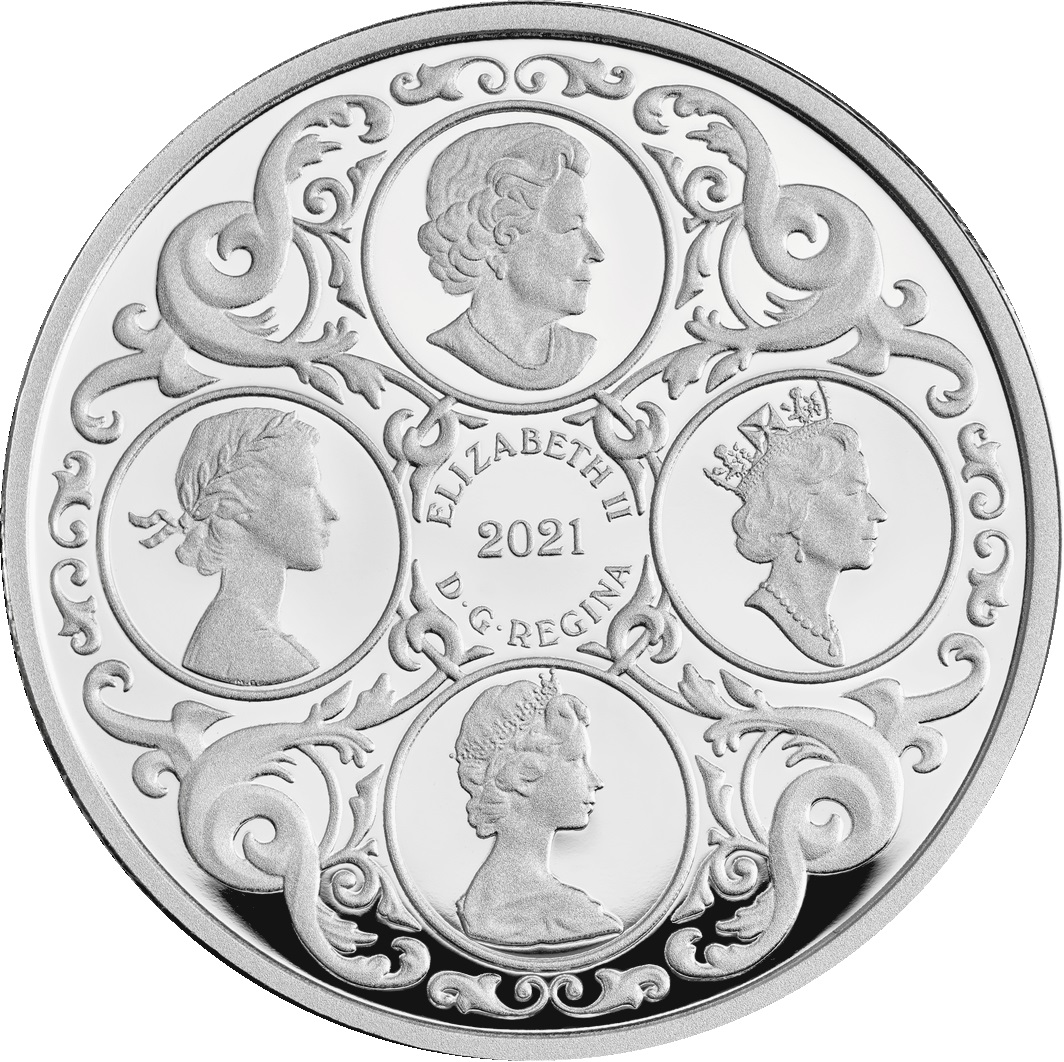 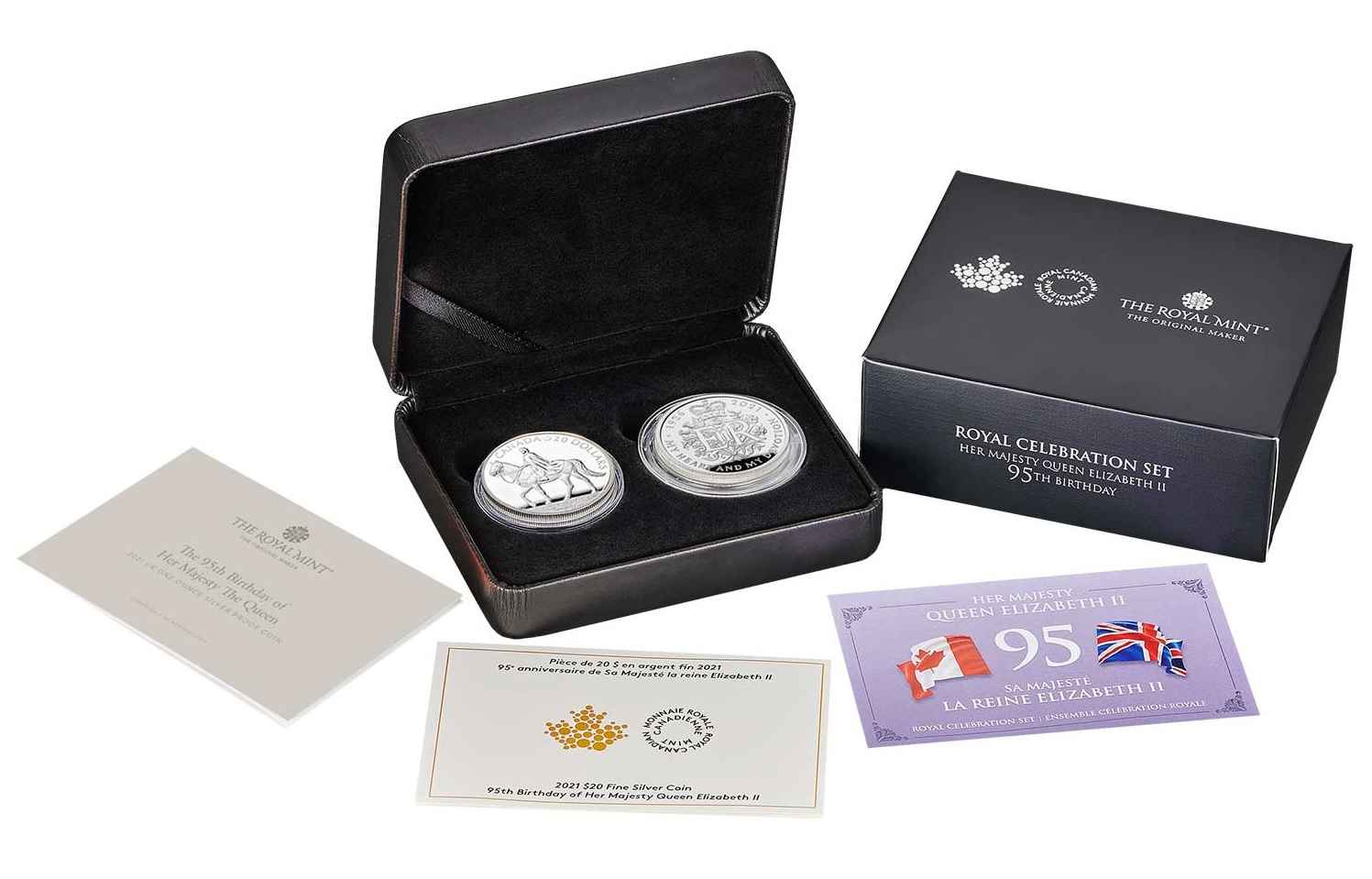