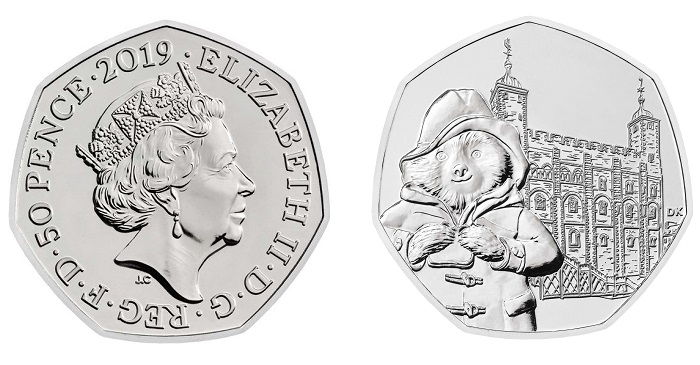 The Royal Mint has released (13th August) two new commemorative coins featuring one of the world’s most lovable children’s characters, Paddington Bear. Following up on the popularity of the 2018-dated 50-pence coins which saw Paddington visit his namesake train station and the guards outside Buckingham Palace, the latest coins depict Paddington’s adventures to two of the capital’s most iconic landmarks: The Royal Mint’s former home, the Tower of London, and St. Paul’s Cathedral.

Created by Michael Bond, the escapades of Paddington Bear have captured the imagination of youngsters for generations. The legend of Paddington Bear started on Christmas Eve 1956 when Michael was in a London department store and spotted a small stuffed bear. It was the last one on the shelf, and, rather than leave him on his own, he purchased him for his wife. This bear inspired Bond to write a story, and within just 10 days, he had written the first book. In the first story, which was published in October 1958, the polite, kind-hearted bear arrives fittingly at Paddington Station, London, as a stowaway. He is found by the Brown family, sitting on his suitcase with a label around his neck that reads:

Please look after this bear. Thank you.

The friendly bear is named “Paddington Brown” by his new family, and with his famous hat, battered suitcase, duffle coat, and, of course, his great affinity for marmalade has entertained children all over the world. With the Paddington books having been translated into 40 languages across 70 titles and more than 35 million copies having been sold worldwide, the adventures and escapades of Paddington continue to work their magic with a new generation of young readers. In 2014, a live-action film, Paddington, was released, introducing this lovable character to even more fans — young and old alike! 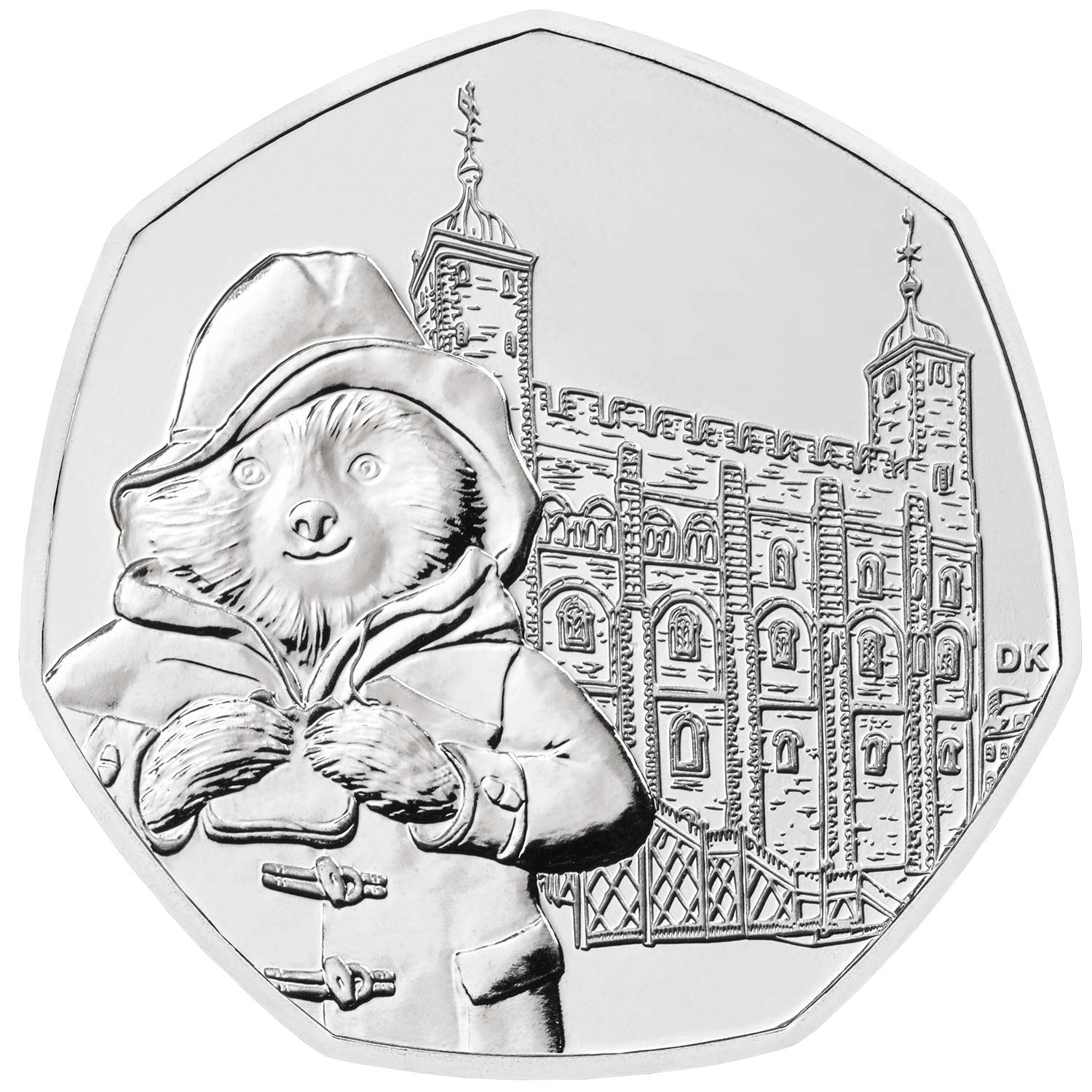 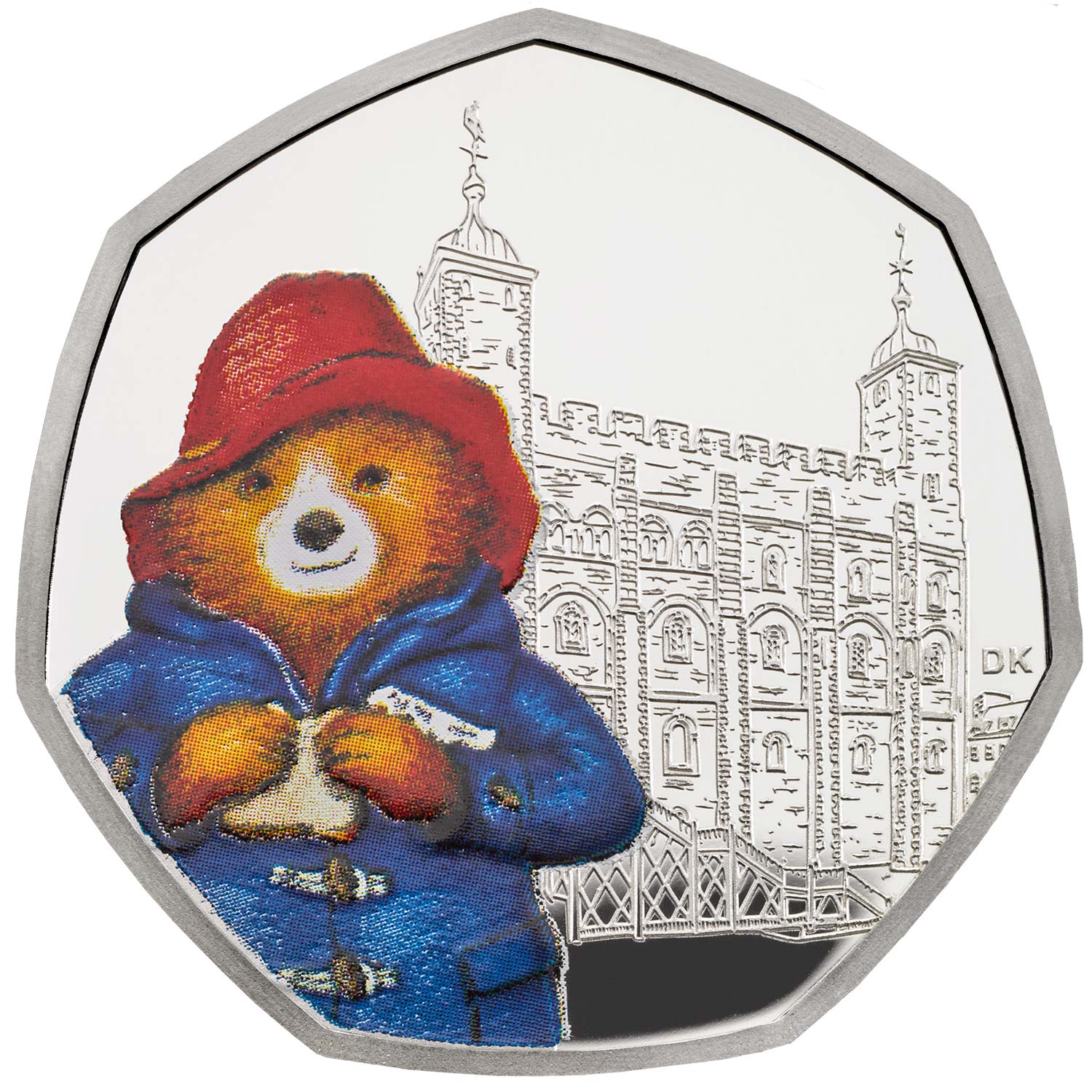 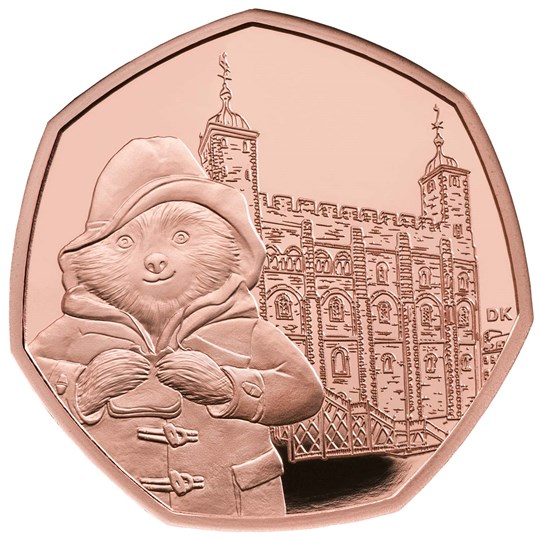 The reverse side of the coins are designed by Dave Knapton and depicts Paddington Bear in front of the two landmarks, the Tower of London featuring the famous White Tower, and St. Paul’s, which highlights the well-known 278-high dome atop the 344-year old cathedral. 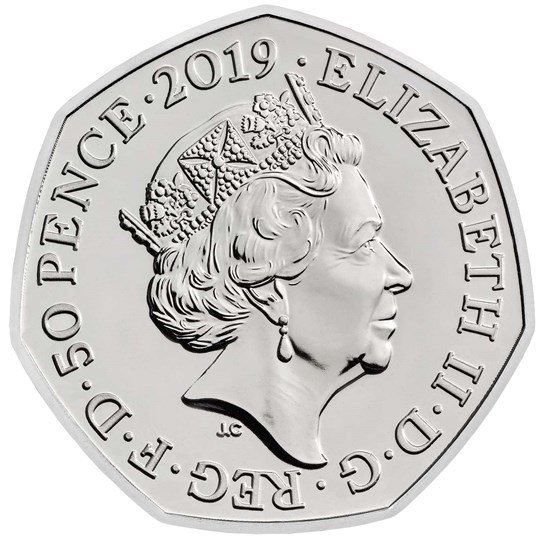 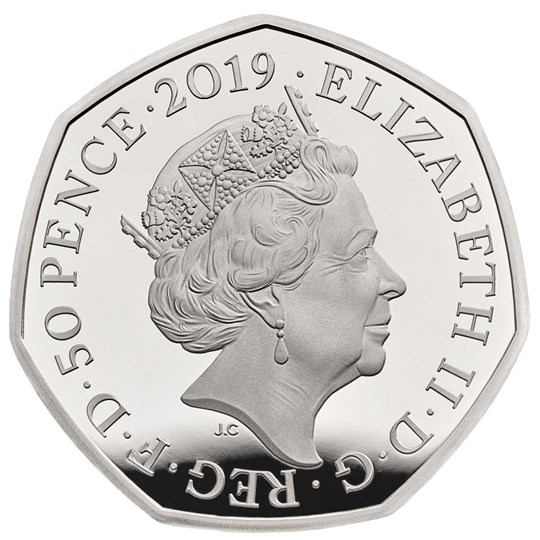 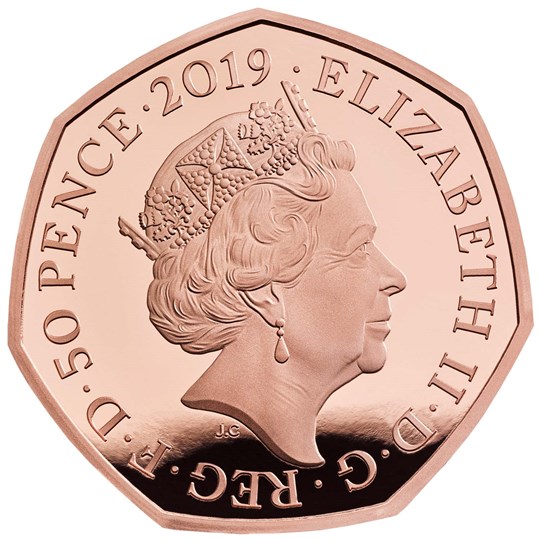 The obverse of each coin includes the fifth numismatic effigy of HM Queen Elizabeth II created by Royal Mint engraver Jody Clark that was introduced onto British circulation and commemorative coinage in 2015. 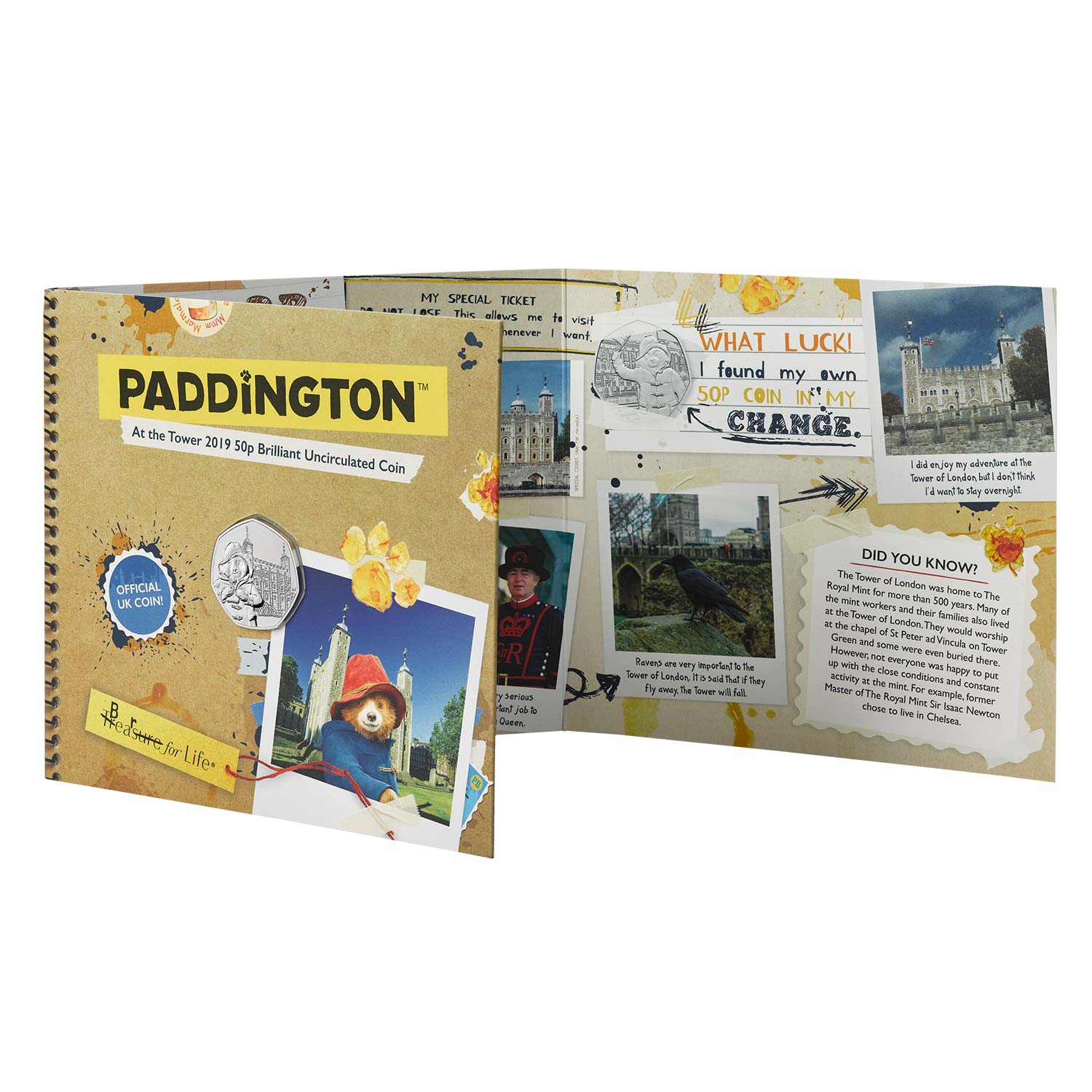 The cupro-nickel seven-sided base metal coins are presented in a colourful folder with text describing the story of Paddington Bear. 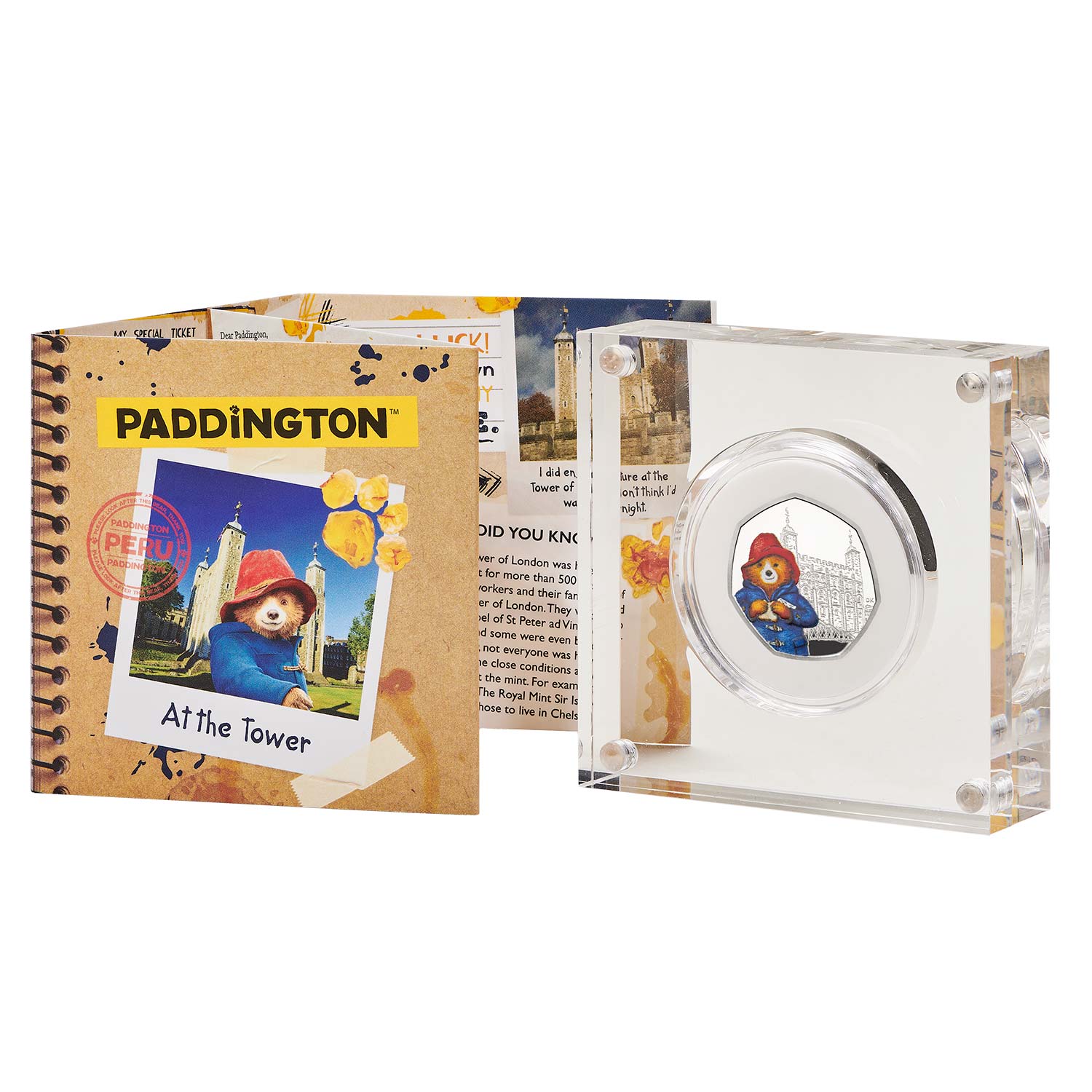