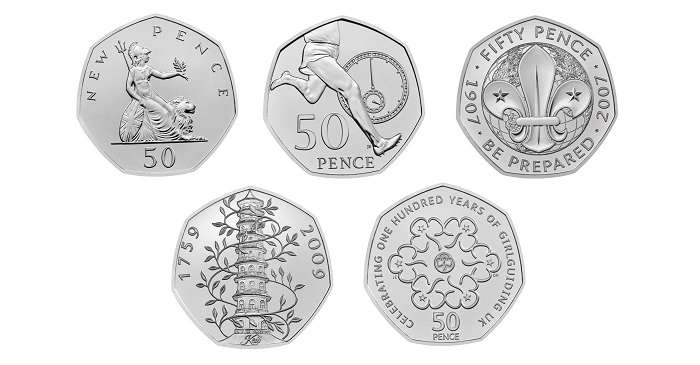 The Royal Mint has launched (25th March) a new five-coin set which features some of the most popular commemorative reverse designs in the 50-year history of issuing the revolutionary 50-pence circulation coin. At the time of its introduction, it wasn’t realised just how much the coin would become a symbol of “Britishness” in terms of originality and inventiveness.

Earlier designs of a newly proposed 50-pence coin to replace the-then circulating 10-shilling banknote took on a life of its own and was approached with great zeal. Initial models included 10 and 12-sided versions, and there was even a square model with rounded corners. However, The Royal Mint decided that a seven-sided or, an equilateral heptagon coin made it easier to tell the 50-pence coin apart from the rest of the UK’s coinage. The shape was refined by removing inconvenient sharp points which also reduced the rate of wear. More importantly, the coin needed to have the ability to be utilised with coin-sorting and vending machines, which was then coming into increasing use in industry. The new 50-pence coin was proposed to weigh 13.5 grams of cupro-nickel and have a diameter of 30 millimetres. The last detail would be what the reverse side would depict.

The obverse side of the coin included an effigy of HM Queen Elizabeth II created by British artist Arnold Machin (1911–1999), which was already in use on new 5 and 10-pence coins since 1968, so the question of what the reverse side would look like came into focus next. A question of whether the British coat of arms or a seated version of Britannia would be more appropriate was raised. As the only coin in circulation that included Britannia was being removed from circulation, the one-penny coin, it was decided that Britannia should transition onto the new 50-pence coin and the design created by Sir Christopher Ironside was chosen. His rendition of Britannia seated alongside a lion was considered among the best work of the artist. The new design was accompanied by the words NEW PENCE above the design and the numeral 50 was placed below Britannia.

The coin’s official release date was the 14th October 1969, but the coins were not an immediate hit with the British public. Some shopkeepers, bus conductors, and members of the public began to point out that in spite of its distinctive shape, it was too easily confused with the 10-pence coin (or half-crown) which was still in use. The first commemorative design, which was placed on the reverse side of this denomination, was in 1975 on the occasion of a referendum held to confirm the UK’s admission into the European economic community. The next commemorative reverse would not make an appearance until 1992 with the UK’s assumption of the European Union rotating council’s presidency. Since then, the coin has been issued with many reverse commemorative designs, including 29 different representations in 2011 for the Summer Olympics, which were hosted in London the year later. The coins remained in circulation without changes to its specifications until 1997 when they were reduced to 27.3 millimetres in diameter and eight grams in weight. A total of four effigies of the Queen have also been included on the obverse.

The five designs included in the Brilliant Uncirculated set include:

A Modern Classic, 1969-2008: Restored to the coinage of Charles II in 1672, Britannia has been a fixture on the coins of every subsequent monarch. Christopher Ironside’s depiction of the United Kingdom’s most recognisable national icon seated beside a lion and resting her shield endured for 40 years before being replaced by Matthew Dent’s definitive design in 2008.

The First Sub Four-Minute-Mile, 2004: On 6 May 1954, Roger Bannister made sporting history, becoming the first athlete to run a mile in under four minutes. Taking the tape in three minutes and 59.4 seconds, in front of 3,000 cheering spectators at the Iffley Road track in Oxford, his legacy lives on as British athletes continue to break new ground, pushing themselves to the limit of human endurance. The design marked the 50th anniversary of this achievement by showing Roger mid-stride, as he closes in on his record.

100 Years of Scouting for Boys, 2007: The scouting movement was founded in 1907 by Robert Baden-Powell, a British cavalry officer. He hoped to instill in boys aged 11–14 a sense of resourcefulness and a code of chivalrous behaviour. Originally a British movement, scouting took off all over the world. Today, those values are still upheld as millions of boys promise to be loyal to their country, help others and obey the scout law. The design features the World Scout Emblem alongside the iconic motto BE PREPARED.


250th Anniversary of the founding of Kew Gardens, 2009: 2019 is the 10th anniversary of the release of the Kew Gardens 50-pence design. A £5 million facelift of the Great Pagoda has recently restored Britain’s first skyscraper to its former splendour, and even the dragons have returned for the first time in 200 years. Originally completed in 1762 as a gift for Princess Augusta, Kew’s landmark building will stand for centuries to come. The famous design features the Great Pagoda in all its glory, encircled by rare vines.

100 Years of the Girl Guides, 2010: Inspired by the popularity of his scouting movement, in 1910 Baden-Powell asked his sister Agnes to start a similar group for girls. Still going strong in the 21st century, through a mixture of fun, adventure, and friendship, the Girl Guides encourage today’s youngsters to face the challenges of growing up and to be the best they can be. The design features a special arrangement of the Girl Guides trefoil.

The five coins in the set include the fifth effigy of HM Queen Elizabeth II introduced onto British circulation coinage in 2015. They are presented in a four-panel folder and slip-case which contains images and interesting information about the designs of each coin included. The number of sets is unlimited, to meet demand. For additional information about this set and other coins available from the Royal Mint, please visit their website.