Yesterday (26th October) the Royal Mint unveiled their bicentenary anniversary design for the iconic gold Sovereign. The Sovereign’s full story is more than 500 years old. This worldwide favorite was first issued in 1489 during the reign of King Henry VII and was struck until 1604, when it was discontinued during the reign of James I. It was again issued in the United Kingdom as part of the Great Recoinage of 1816, which reformed the gold coins in circulation from Guineas of 21 Shillings to Sovereigns of 20 Shillings. It was struck continuously thereafter until 1936, during which time it set new standards for accuracy and beauty that defined a currency. It went on to become known as “the chief coin of the world” during the 19th century, and, while its role has changed over the years that followed, it maintains a global reputation for accuracy, integrity, and beautiful design, traded widely on the global bullion markets and coveted by collectors. (See “Gold Sovereign, Gold Standard,” below.)

A large part of the Sovereign’s charm and reputation is built on its iconic design, Benedetto Pistrucci’s neoclassical interpretation of St. George and the Dragon. First introduced in 1817, the design has remained almost constant throughout the Sovereign’s evolving story, appearing on the majority of annual issues since its debut and, more recently, replaced only on very rare occasion. For its 200th anniversary in 2017, the reverse design returns to Pistrucci’s original “garter” design, referencing the garter encircling the field with buckle at lower left. The legend on the garter reads HONI SOIT QUI MAL Y PENSE (“Evil unto him that thinks evil of it”), which is the motto of the British chivalric Order of the Garter. (For more on the Order, see “Elizabeth II and the Order of the Garter,” here.) 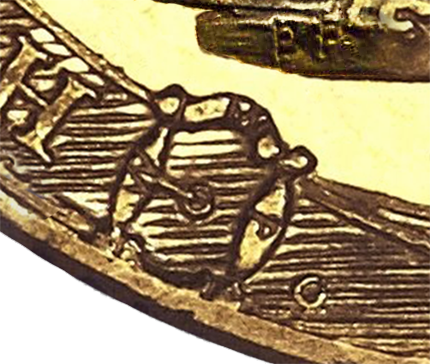 Initials W-W-P, arranged around three sides of the buckle on an 1817 “garter” Sovereign.

Another detail in the 1817 design that appears on the bicentenary issue is the weapon in St. George’s hand—a broken spear, the other half being embedded in the vanquished dragon. In later years, the spear was replaced with a sword. The designer’s initials, BP, are incused at lower left below the dragon; not included in the new issue are the initials WWP, which referenced William Wesley Pole, master of the mint, and were incused into the garter’s buckle.

The obverse includes the year of issue (2017) and the fifth effigy of HM Queen Elizabeth II, as designed by Royal Mint engraver Jody Clark and used on all British circulation and most commemorative coins since 2015. The metallic composition—.9167 fine gold (22K)—was adopted by the South Africa Mint when it introduced its gold Krugerrand in 1967. (The Krugerrand celebrates its 50th anniversary next year.) The coin has been struck with tools that were carefully remastered from the 1817 originals.

* The £5 gold piece and double sovereign are available only as part of the five-coin set or the prestige three-coin set. (Scroll down for ordering information.)

The Royal Mint are taking registrations for the new coin; these can be filed at their website. There are various purchasing options for the £5 gold piece to the quarter sovereign. There is presently no information about Brilliant Uncirculated versions of this new anniversary design.

Benedetto Pistrucci came to London from Rome in 1815 under the patronage of Prince George, the Prince Regent (and later King George IV). He was relatively unknown in Britain but his reputation attracted interest and he quickly found sponsors and supporters of his work. Soon after his arrival, his talent as an engraver was recognized, and he was given the prestigious task of creating the designs for the new gold and silver coins of George III at the Royal Mint. 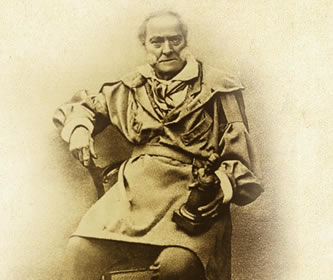 In the early 19th century the effects of the Napoleonic Wars and a shortage of silver meant that the United Kingdom’s circulating coinage was in poor condition. The recoinage and exchange of 1816–17 would transform the nation’s coins, and the new standards meant greater scrutiny and efficiency than ever before. The Royal Mint had moved to a new location in Tower Hill, where it was equipped to meet the new demands with modern steam-powered machinery.

Alongside this activity, legislation would formalize the gold standard, setting out the coins to be produced and the standard to which they would be struck. One key change was the reinstatement of the 20-Shilling piece but with a new name: the Pound or Sovereign. As it would circulate alongside the 21-Shilling gold Guinea for a time, it was essential that the Sovereign be distinctive from the existing gold coin. The chosen reverse design, the instantly recognizable St. George and the Dragon created by the newly appointed Benedetto Pistrucci, was acknowledged across the world as a masterpiece, and has become synonymous with the concept of the gold Sovereign. 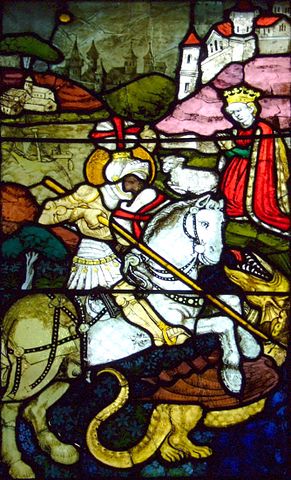 Pistrucci created an interpretation that defied the medieval image of a knightly St. George, instead opting for a Greek interpretation: bare and muscular, not weighed down with the usual chain mail and armor. The inscription created for the Sovereign’s 1817 revival has been revisited for this celebratory anniversary edition: HONI SOIT QUI MAL Y PENSE, a Latin motto meaning “Evil unto him that thinks evil of it,” which has featured on the coat of the Royal Arms of the United Kingdom for centuries.

As chief medalist, Pistrucci went on to design the portrait of King George III that appeared on the gold sovereign (as well as on the new silver Crown of 5 Shillings, among other coins and medals, many considered masterpieces during Pistrucci’s lifetime). He died in 1855 and was buried in Surrey, where his prominent gravestone cites his title as Her Majesty’s “Chief Medallist.”

Brilliant Uncirculated Sovereigns from 2016 and earlier can be purchased at APMEX.
Share: