The organizers of the United Future World Currency project (UFWC) have announced that silver examples of the gold prototype coins presented to the heads of state and Government at the L’aquila Summit in July 2009 are now available to collectors.

The UFWC commissioned a small quantity of sterling silver examples to be struck at the Royal Belgian Mint as presentation pieces. These coins have the exact design and dimensions as the gold coins presented to the attendants of the Summit. One of these silver examples is also on display at the Smithsonian Institute. 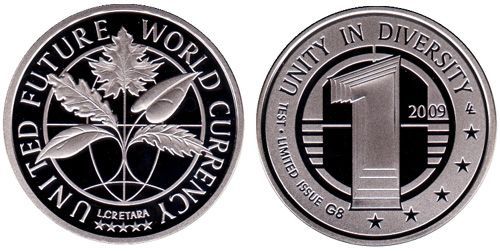 On the obverse of the coins is the “Tree of Life” design, which depicts five leaves that are grown and seen on all five inhabited continents. The design is by Laura Cretara, former engraver of the Italian State Mint. An inscription reads “United Future World Currency”, with the designer’s name and five stars representing the continents below.

The reverse includes the numeral “1” repeated five times in overlapping layers.  The inscription “Unity in Diversity” appears above, with the year “2009” to the left of the numeral. The overlapped initials (LL) of the designer/artist, Luc Luycx can be seen to the right of the date. The reverse carries the commemorative inscription of “TEST • LIMITED ISSUE G8” which is positioned to the lower left of the numeral “1”. 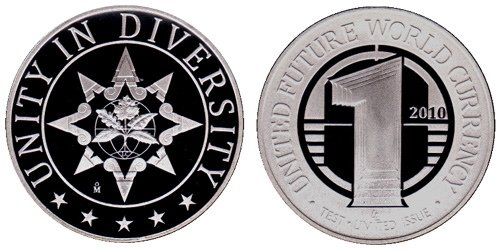 A second silver example of the one unit prototype coin, dated 2010, has also been struck in North America. This example continues the theme of an internationally recognized currency available to all.

The prototype coin is struck at the Casa de Moneda in Mexico and integrates elements of an Aztec calendar, the “Stone of the Sun” motif along with the original tree of life design symbolizing local tree species found on all five inhabited continents.

Collectors are advised to contact the UFWC directly through their website at http://www.futureworldcurrency.com/ for ordering information about either of the prototype coins, but stress that the number of coins available is limited.