Today July 15, 2010, the United States Mint began sales of the 2010 Uncirculated Coin Set. This is one of their most popular annual offerings, which includes uncirculated coins struck at the Philadelphia and Denver Mints. 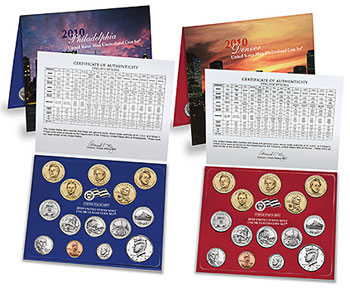 The coins are produced with a special satin finish, which differs from the regular finish used for circulating coins. The mint set coins are struck on special presses, using greater force to produce a sharp design with a satin-like finish. This finish has been used for the annual mint set and certain collector sets since 2005.

All five of the dollar coins included in the set feature rotating obverse or reverse designs. The 2010 Presidential Dollars feature the obverse portraits of the 13th to 16th Presidents of the United States of America- Millard Fillmore, Franklin Pierce, James Buchanan, and Abraham Lincoln. The 2010 Native American Dollar features the theme “Government – The Great Tree of Peace” with a reverse design portraying the Hiawatha Belt, a visual representation of the Haudenosaunee or Iroquois Confederacy.

The coins included in the 2010 Uncirculated Mint Set are packaged in two separate illustrated folders containing the 14 coins from each mint facility. The sets are priced at $31.95 plus applicable shipping and handling charges.

Orders may be placed online at http://usmint.gov/catalog or by phone at 1-800-USA-MINT.