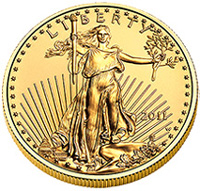 This is a slower rate of sales than the more popular 2011 Proof Gold Eagles, released by the US Mint on April 21, 2011. In the opening days of sales, collectors had ordered 7,249 of the one ounce proof coins and 3,988 of the four coin sets, which include all four Proof Gold Eagles.

The US Mint currently offers three different versions of the American Gold Eagle. The bullion version is struck in the highest numbers and valued based primarily on precious metals content. These coins are sold by the US Mint to a network of authorized purchasers based on the market value of gold plus a small premium. The coins do not carry a mint mark.

The proof versions are collector products, produced in smaller quantities and usually with maximum mintage levels established. The coins are struck on specially treated, hand polished blanks with specially prepared dies. The process results in coins with a frosted foreground and mirrored background, creating a cameo effect. The US Mint sells the proof coins directly to collectors at higher premiums, with prices adjusted as frequently as weekly based on changes in the market price of gold. These proof coins carry the “W” mint mark.

The uncirculated versions are a second type of collector product. These coins feature a finish similar to the bullion version, however the coins are struck on specially burnished blanks, which are hand-loaded into the coining press. The coins carry the “W” mint mark, further differentiating them from the bullion versions. The US Mint packages the coins and sells them directly to collectors. Prices may be adjusted weekly based on the market price of gold. Although no maximum mintage levels are stated, the uncirculated versions typically have the lowest mintage of the three versions.