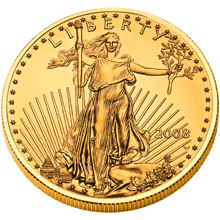 Although the United States Mint has confirmed that they will be offering 2010 Proof Silver Eagles, there are two collectible precious metals products that won’t be making an appearance this year. The one ounce uncirculated 2010-W Gold Eagle and 2010-W Silver Eagle have both been canceled, along with the 2010 Annual Uncirculated Dollar Coin Set, which would have included the silver coin.

In 2006, the US Mint introduced a line of collectible uncirculated versions of American Eagle bullion coins. These coins were struck through a specialized minting process on burnished blanks. To further distinguish the coins from their bullion counterparts, the coins also carried the “W” mint mark for the West Point Mint.

From 2006 to 2008, uncirculated versions of the American Gold Eagle and American Platinum Eagle were issued in one ounce, one-half ounce, one-quarter ounce, and one tenth ounce sizes with a 4 Coin Set available. The same range of options was available for the Gold Buffalo coins in 2008. One ounce uncirculated Silver Eagles were offered from 2006 to 2008 with the coins also included within an Annual Uncirculated Dollar Coin Set issued in 2007 and 2008.

Unfortunately, the uncirculated 2009-W Gold and Silver Eagles were canceled along with the traditional proof offerings due to high demand for the bullion versions of the coins. With the coins now canceled for a second year, will this offering ever make a come back?