Australia’s launch of the UN International Year of Co-operatives kicked off on the 22nd November at Parliament House with the release of a $1 collectible coin produced by the Royal Australian Mint recognizing this auspicious initiative. Australia will be the only nation in the world to produce a collectible coin celebrating the UN International Year of Co-operatives in 2012 recognizing the impact of the co-operative business model on the burgeoning strength of the Australian economy on the world stage.

The coin was launched in Canberra at the Parliament House by The Honorable Bill Shorten, Assistant Treasurer. In attendance during the launch was Parliamentary Secretary to the Treasurer, David Bradbury, who also commented that some of Australia’s biggest household names are cooperatives who provide consumers with a real alternative. 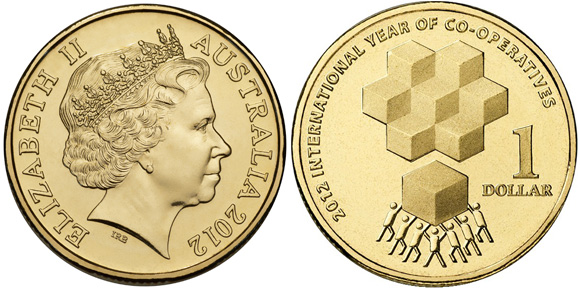 The reverse of the coin shows a stylized group of builders adding blocks to a portion of the structure completing the greater picture. The text indicates “2012 INTERNATIONAL YEAR OF CO-OPERATIVES” along with the denomination of one dollar placed just to the right of the primary design. The obverse includes the current effigy of HM Queen Elizabeth II sculpted by Ian Rank-Broadley and used on all presently circulating Australian coinage since 1998.

The 2012 International Year of Co-operatives $1 collectible coin will be available from the Royal Australian Mint in January 2012.