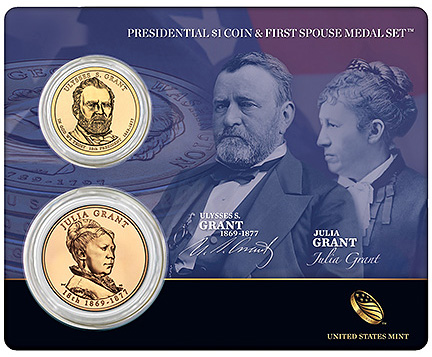 The coin and medal are mounted on a plastic display card, which features illustrations of the President and his wife on the front and issuance information on the back. Each set is priced at $14.95 plus applicable shipping and handling. Orders for the sets may be placed at http://catalog.usmint.gov/

The 2011 Ulysses S. Grant Presidential Dollar was designed and sculpted by Don Everhart. The obverse features a portrait of the former President with inscriptions “Ulysses S. Grant”, “In God We Trust”, “18th President”, and “1869-1877”. The reverse features an image of the Statue of Liberty with inscriptions “United States of America” and “$1”. On the edge of the coin are the date, mint mark, and “E Pluribus Unum”.