The Canada Lynx (Lynx canadensis) is found in boreal forests across Canada and Alaska as well as certain northern areas of the United States. The animal is about twice the size of a domestic cat and has dense, silvery brown fur often with black markings. Although common throughout the areas mentioned, the Canada Lynx is secretive and mostly nocturnal, making encounters with the stealthy predator rare. 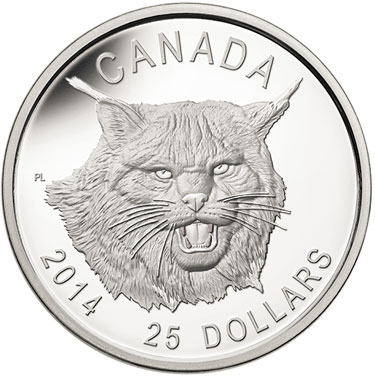 The reverse design of the coin by Canadian artist Pierre Leduc features a close up portrait of the Canada Lynx. Ultra high relief is used to depict the distinctive facial features and add a more sculptural aspect to the design. The creature is shown gazing intently forward with its mouth slightly open to reveal its sharp teeth. The long shaggy winter coat, ruffed face, and tufted ears complete the image.

On the obverse is the Susanna Blunt effigy of Queen Elizabeth II.

For additional information or to place an order, please visit the Royal Canadian Mint product page. Information offered in English and French.