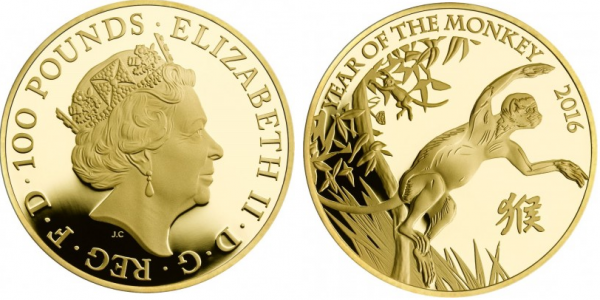 The Royal Mint has launched its third series of lunar year collector coins featuring the Year of the Monkey, which begins on February 8.

Each year is represented by an animal as part of a twelve-year cycle. As with the astrological signs of the zodiac, various animals or star configurations mean that those born under these star signs display different attributes associated with these signs. Lunar year folklore is no different. For instance, those born in the year of the Monkey are said to have the qualities of eloquence, intelligence, creativity, and an ability to be a problem solver. On the other side of the coin, they are often described as being impatient, reckless, and—at times—vain!

The Royal Mint’s lunar coins are produced specifically for the United Kingdom, and blend Chinese tradition with British craftsmanship. This year sees the introduction of a UK kilo coin to the lunar year line for the first time. Artist and printmaker Wuon-Gean Ho, designer of The Royal Mint’s lunar horse and sheep coins, continues the series with the Monkey, believed to symbolize luck, honor, and wealth. The Royal Mint’s unveiling of the new Lunar Year design is an eagerly anticipated annual event in the mint’s launch calendar; the 2016 Year of the Monkey Coin follows the release of the 2015 Year of the Sheep and 2014 Year of the Horse coins.

The coins, which are minted in both gold and silver, share a common reverse design that includes two rhesus monkeys in their native habitat, arms outstretched while they leap to another tree branch. The text “YEAR OF THE MONKEY 2016” is placed along the top rim of the coin. The obverse of the coins includes the latest and fifth effigy of HM Queen Elizabeth II as created by Royal Mint engraver Jody Clark.

The mintage numbers for each of the seven options includes the number 8 at least once, as it is thought to be lucky in some Asian cultures, including China. Each coin is available for purchase as a separate item. For more information on this and other coins on offer from the Royal Mint, please visit their Web site. Information is offered in English, with international orders dispatched where applicable.