The National Bank of Ukraine has issued new silver and base metal coins with colour which feature the country’s native flora and fauna in an ongoing coin series. Focusing on the 2020-dated coins is Lepidoptera, an order of insects that includes butterflies and moths. Known in the Ukrainian language as “sovka roskoshnaja” and loosely translated the name of this unusual moth means “luxury scoop.” They are found predominantly in Northern and Eastern Ukraine though the species is found in other European countries from Sweden to Romania and many countries in between. The species was first catalogued by eminent Swedish botanist and zoologist Carl Linnaeus (1707–1778) in 1758 who assigned it the Latin reference of Staurophora celsia. This insect has a length of about two centimetres (or about 8/10th of an inch) but its wingspan can grow to 4.5 centimetres (or 1.7 inches) across. Their distinctive wing colours, consisting of sizeable green front wings and brown back wings, ensure they are usually difficult to confuse with any other species of moth.

Their lifespan isn’t very long, from larvae to adulthood and full development, they begin their cycle usually as chrysalis — the life stage between immature and mature stages — in June and emerge as the fully developed sovka roskoshnaja in September. From this stage, they will mate and reproduce by laying eggs in tall grasses before dying in October. The cycle will begin once again in the early summer. Due to their environment consisting of both forests and meadows, which are being reduced with the encroachment of human inhabitants, the numbers of the sovka roskoshnaja are on the decrease year on year. 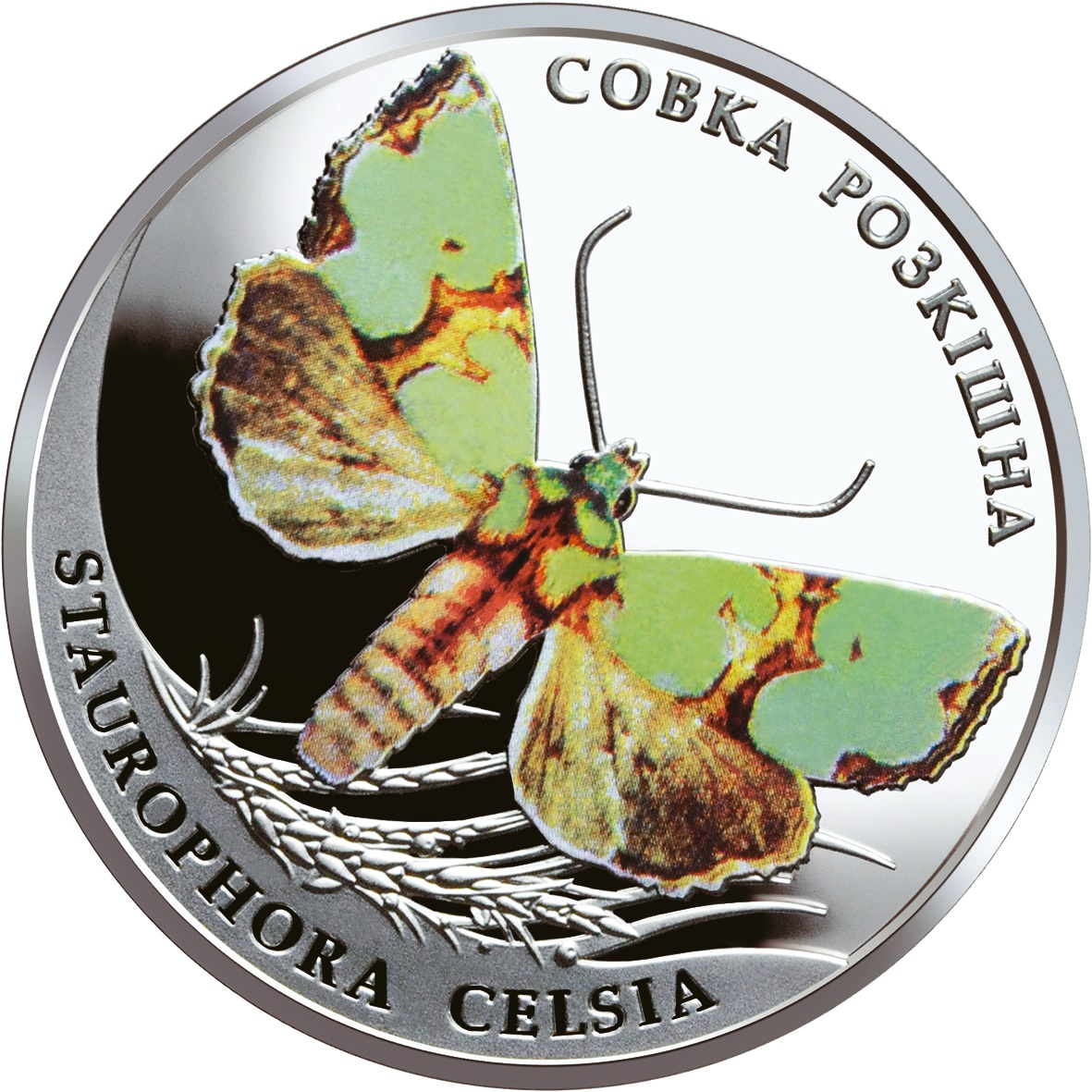 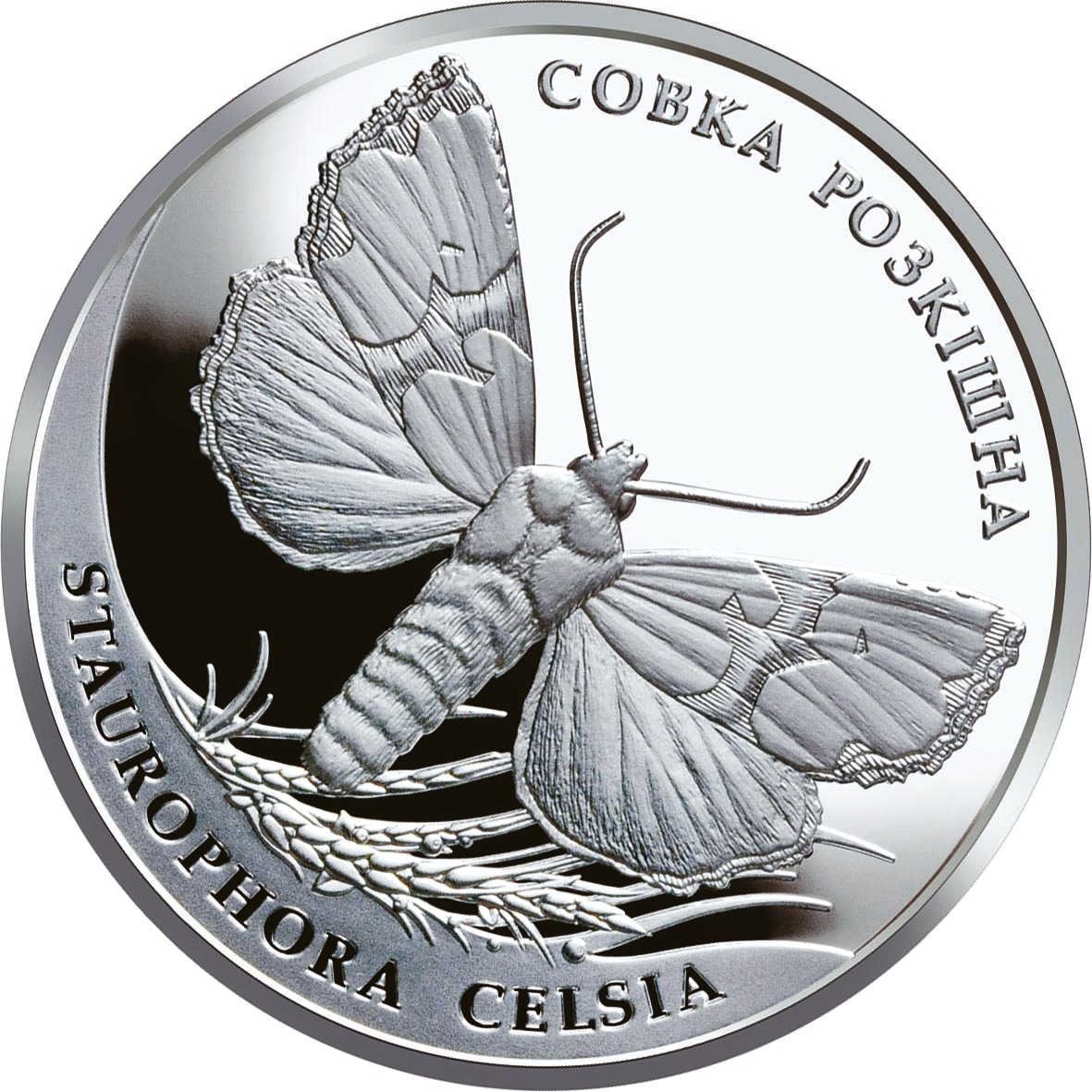 The coins, minted in both sterling silver and cupro-nickel with a colour application, are produced by the Mint of Ukraine, on behalf of the National Bank, and designed by Vladimir Demyanenko. The obverse side depicts the Staurophora celsia in intricate detail along with tall grass below. The text STAUROPHORA CELSIA is placed below and towards the left. The text СОВКА РОЗКІШНА (“luxury scoop”) is placed above the primary design and towards the right. As part of the minting of the cupro-nickel examples, a colour application of the moth is used. 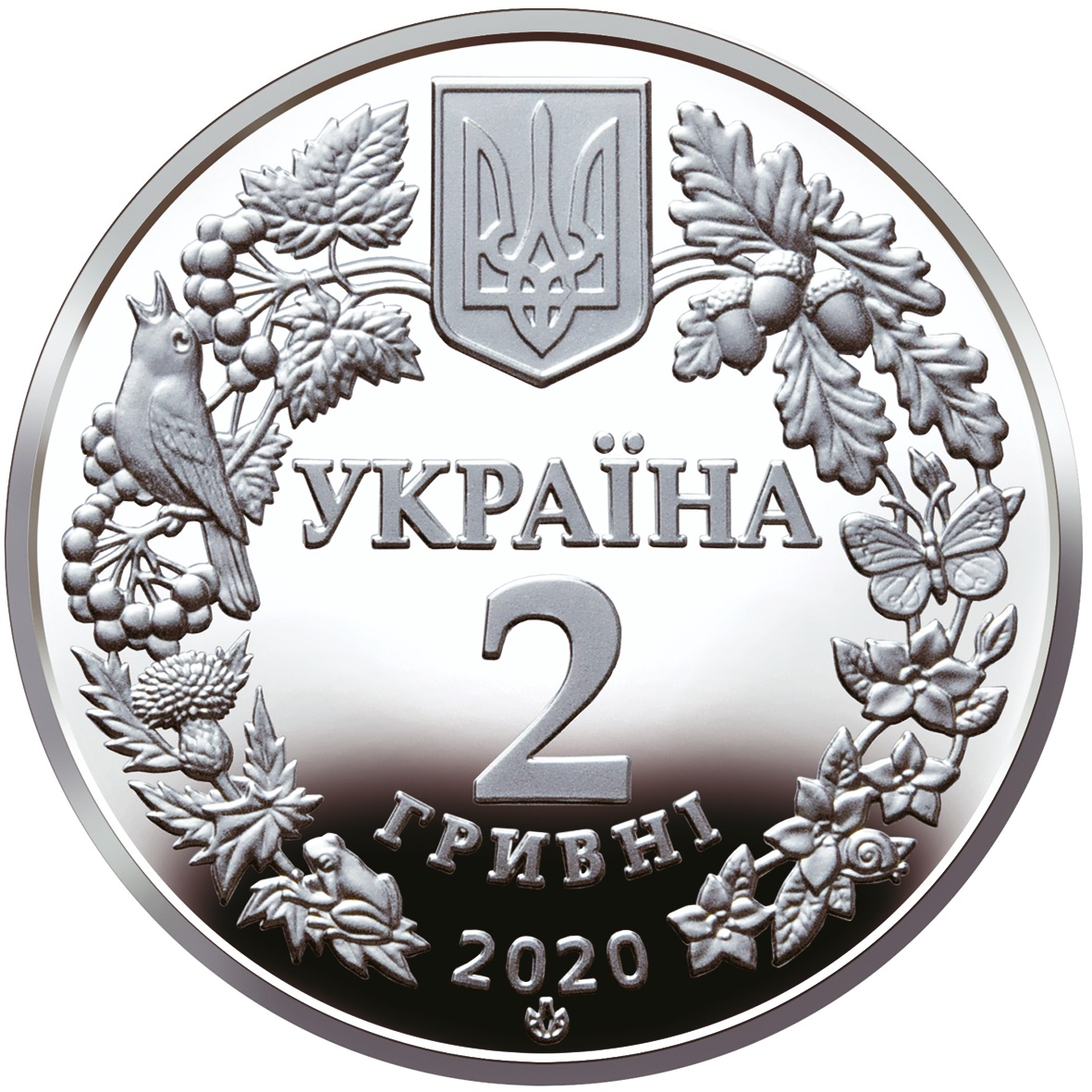 The reverse side of the coins features the denomination 2 or 10 hryvnia, which is placed in the centre of a wreath formed from images of an assortment of species of flora and fauna. Above the wreath is a small state emblem of Ukraine and the inscription УКРАЇНА 10 / 2 ГРИВЕНЬ 2020 (“Ukraine 10 or 2 hryvin 2020.”)

Both silver Proof-quality and cupro-nickel Brilliant Uncirculated coins are each encapsulated and presented in a custom case accompanied by a numbered certificate of authenticity. For additional information about this coin and other coins issued by the National Bank of Ukraine, please visit their website.