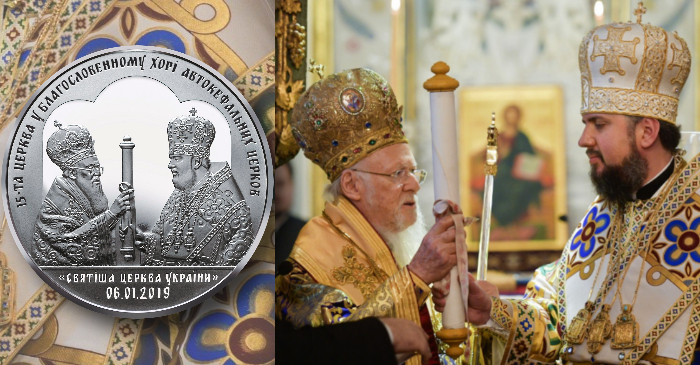 The National Bank of Ukraine has issued (22nd July) their latest large-size silver Proof coin to mark the ultimate process for the autonomy of the country’s Orthodox church, which was finalised on the 5th January 2019.

The event, which marked the millennial path of the Ukrainian church from creation to eventual independence, was dedicated to the donation of the Tomos (or edict) to the autocephaly of the Orthodox Church of Ukraine. The Tomos, which was approved by the Bishops’ Synod of the Ecumenical Patriarchate, officially approves the canonical autocephalous status of the Orthodox Church of Ukraine as one of 15 resident Orthodox churches. 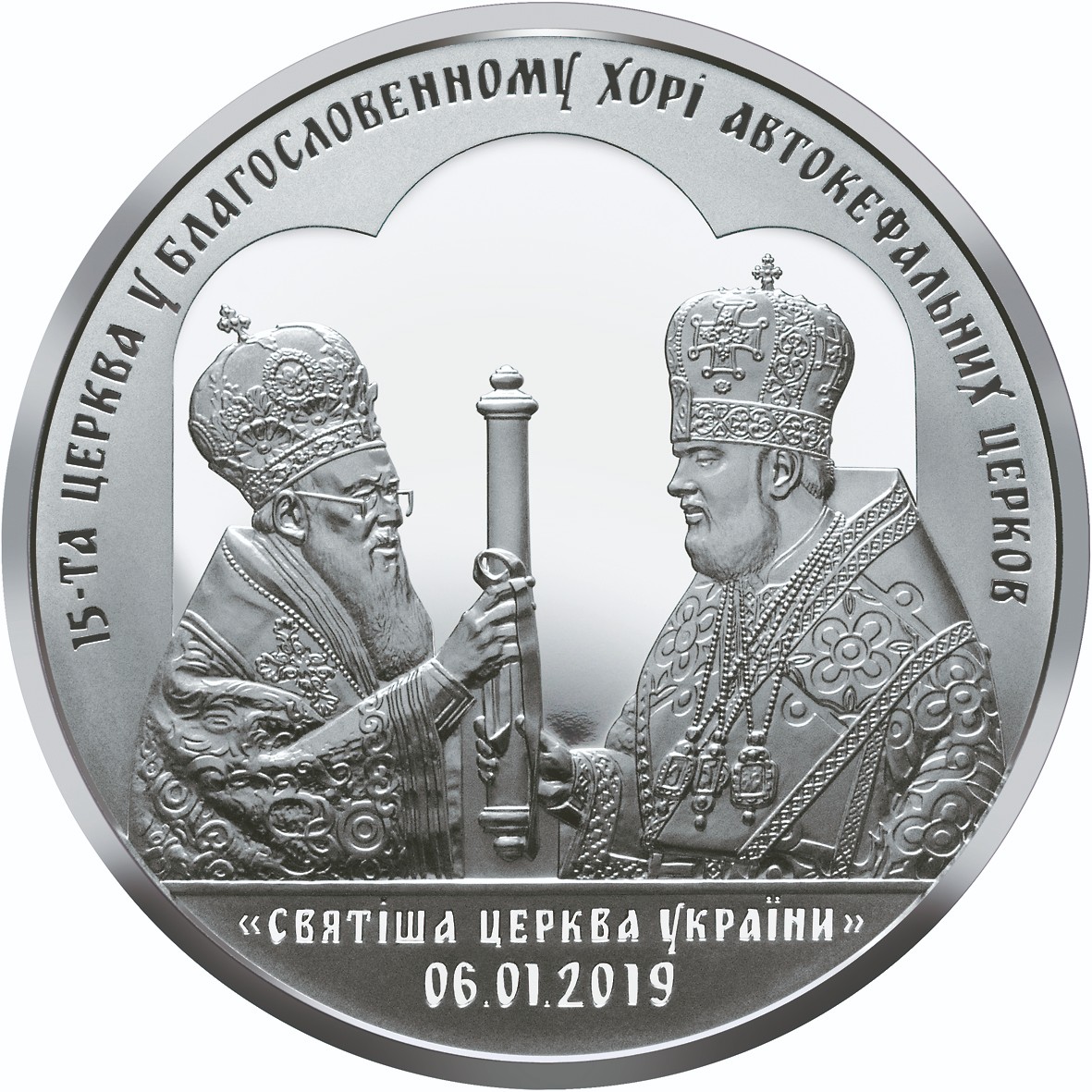 The coins are produced at the Ukrainian Mint on behalf of the National Bank and are designed by Volodymyr Taran, Alexander Kharuk, and Sergey Haruk. The obverse of the coins depicts both the Ecumenical Patriarch Bartholomew (left), who passes the scroll (Tomos) to the Metropolitan of Kyiv and All Ukraine Epiphanius (right). The inscription 15-ТА ЦЕРКВА У БЛАГОСЛОВЕННОМУ ХОРІ АВТОКЕФАЛЬНИХ ЦЕРКОВ (“15th church in the blessed choir of Autocephal Churches”) is seen above the primary design. Below, is the inscription СВЯТІША ЦЕРКВА УКРАЇНИ (“the Holy Church of Ukraine”) with the date of completion, 06.01.2019. 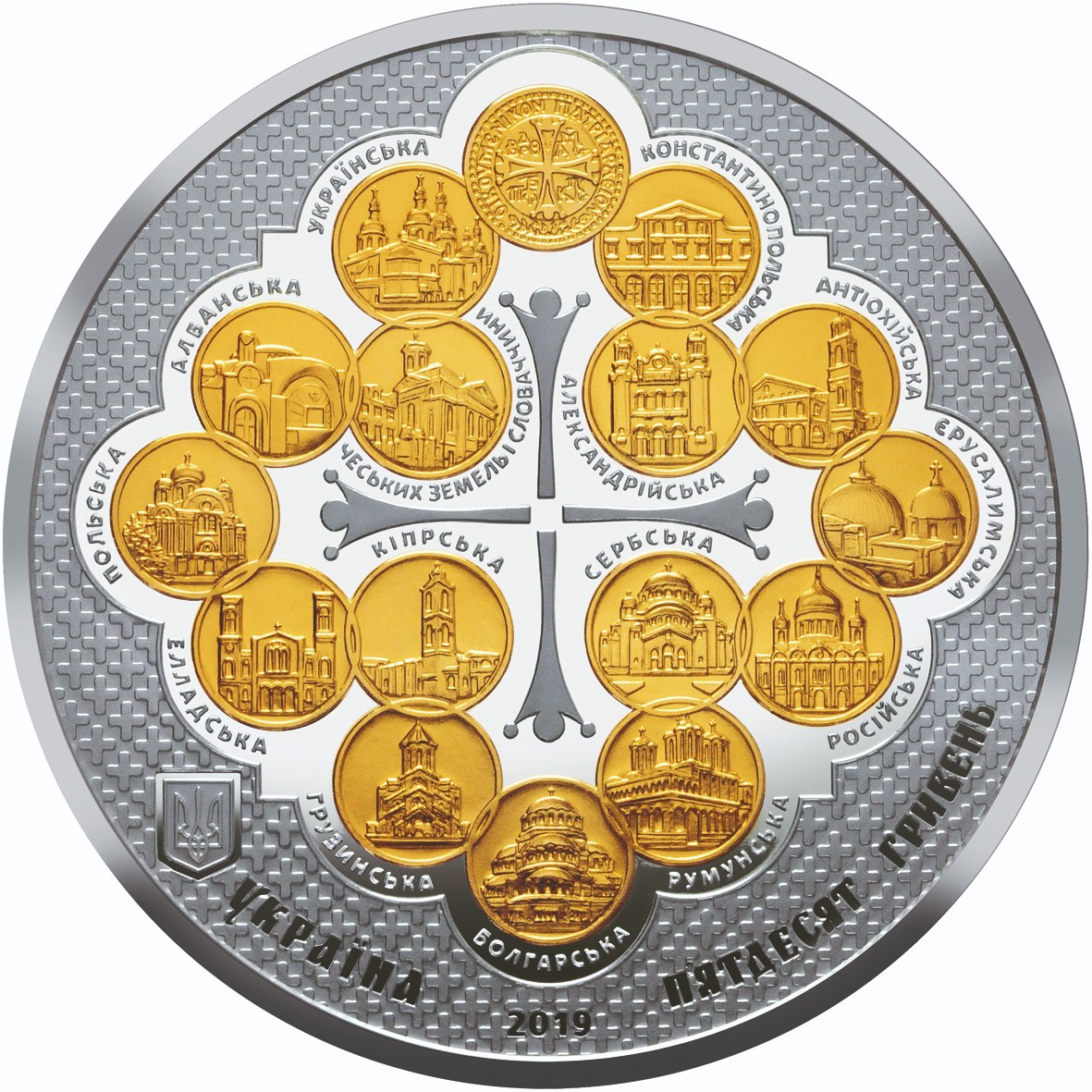 The reverse side depicts the small state emblem of Ukraine placed towards the lower left with a semi-circular inscription УКРАЇНА, the year of issue of the coin, 2019, and the written denomination ПЯТДЕДЯЯ ГРИВЕНЬ (“50 hriven”). In the centre is a stylised cruciform composition, topped by a gilded seal of the Ecumenical Patriarch Bartholomew, which is accompanied with gilded medallions depicting Cathedrals of the other 14 independent Orthodox churches in the world.

Officially issued from the 22nd July, the Proof-quality coins are encapsulated and presented in a custom case accommodating the large half-kilo size and are accompanied by a numbered certificate of authenticity. For additional information about this coin and other coins issued by the National Bank of Ukraine, please visit their website.